What is Ocean Acidification?

What is Ocean Acidification?

Ocean acidification is a global threat with potential impacts on marine food webs, ecosystem productivity, commercial fisheries and global food security. This threat has prompted the international scientific community, including Fisheries and Oceans Canada, to investigate the implications of this significant international governance issue.

Each year, about one third of the carbon dioxide (CO2) in fossil fuel emissions dissolves in ocean surface waters, forming carbonic acid and increasing ocean acidity. Over the next century or so, acidification will be intensified near the surface where much of the marine life that humans depend upon live.

The ocean surface is becoming more acidic with increasing atmospheric CO2, and acidity has increased by about 30% since the beginning of the industrial revolution. Estimates of future carbon dioxide levels, based on "business as usual" CO2 emission scenarios, indicate that by the end of this century, the surface waters of the ocean could be nearly 150% more acidic, resulting in a pH (a measure of acidity) that the oceans haven't experienced for more than 20-million years and raising serious concerns about the ability of marine organisms to adapt. This scenario is based on information provided by the U.S. National Oceanic and Atmospheric Administration (NOAA).

Monitoring ocean acidification and assessing its potential impacts are essential to the development of an ecosystem approach to managing the marine resources that are likely to be affected by this global threat.

Canada's cold coastal waters may be particularly prone to acidification due to the natural occurrence of undersaturated waters at shallow depths (Pacific coast), or large freshwater input (Arctic coast). Freshwater input from runoff and ice melt reduces the ocean's capacity to buffer against changes in pH. Runoff may also contain organic matter from land which can also increase acidification.

Acidification and the Saturation State of Calcium Carbonate

CarbonateAcidification hampers the ability of marine organisms to form shells and skeletons of calcium carbonate (CaCO3). The degree to which seawater is saturated with CaCO3 is known as the "saturation state" (denoted by the Greek symbol omega, Ω). Saturated water has a saturation state (Ω) of greater than or equal to (≥) 1.0. Water with a Ω > 1 is oversaturated and the mineral will tend to precipitate (form a solid). Water with a Ω of less than (<) 1 is undersaturated and the mineral will tend to dissolve.

Increasing acidification reduces the saturation state of calcite and aragonite, the two most common forms of CaCO3. When undersaturation occurs, it is impossible for organisms to maintain or grow CaCO3 shells and skeletons. The saturation state of CaCO3 is determined primarily by the concentration of carbonate ions (CO32-) and pressure (i.e., depth), with temperature and salinity playing smaller roles. It is also affected by ocean processes, including inputs of CO2 from the decay of organic matter or the uptake of anthropogenic CO2 from the atmosphere, surface temperature change, freshwater runoff, stratification and mixing of the water column.

In summer along the west coast of Canada, acidic water from depths of 100 to 200 metres upwells onto the continental shelf and into the ocean surface layer. This upwelling water is acidic due to a high concentration of dissolved inorganic carbon. However, the exposure of the continental shelf to this water is expected to be intermittent since the uptake of CO2 by phytoplankton and outgassing of CO2 to the atmosphere remove the excess dissolved inorganic carbon. Nonetheless the combination of undersaturated water at relatively shallow depths and winds that favour upwelling make the British Columbia shelf particularly vulnerable.

Over the last century, the depth below which the aragonitic shells of shellfish, corals and some plankton dissolve — known as the aragonite saturation depth or horizon (Ωa) — has become shallower by, typically, 30-50 metres. In the Northeast Pacific Ocean, the saturation horizon is naturally shallow – as little as 100 metres below the surface. Scientists expect the saturation depth to become shallower as global atmospheric CO2 concentrations increase over the coming century, putting organisms close to the surface at risk from ocean acidification.

Ocean acidification in this Large Ocean Management Area has been observed in the Canada Basin of the Beaufort Sea. However, increasing ice melt and runoff in summer, combined with higher atmospheric CO2, may increase the frequency and/or area affected by acidified waters on the Canadian Beaufort shelf, a broad estuarine region of the southeastern Beaufort Sea. 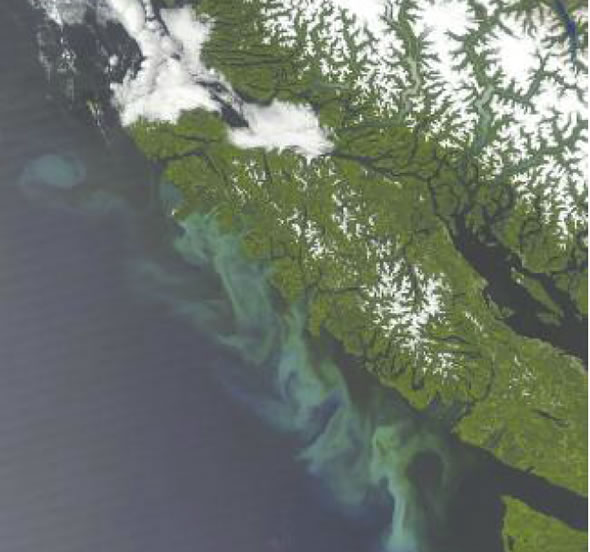 From space, the satellite carrying NASA's Moderate Resolution Imaging Spectroradiometer or MODIS, captured this image of the waters around Vancouver Island and spied a 'bloom' of the tiny plant (about 10 microns in diameter) known as the coccolithophorid Emiliania huxleyi. Similar plants, with a calcium carbonate structure, are at risk from acidification due to increased carbon dioxide in the oceans from the burning of fossil fuels. Photo: courtesy Dr. Ken Denman and NASA. 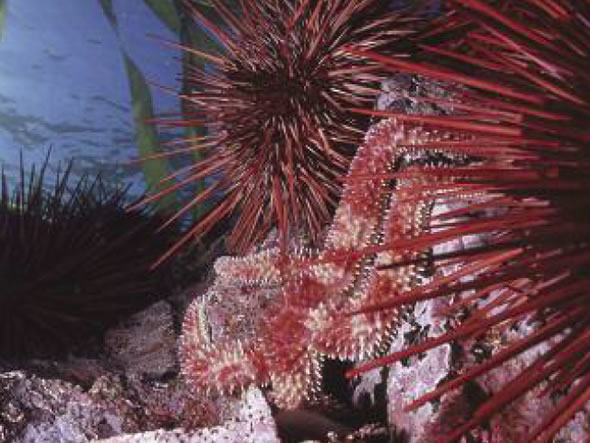 From 1997 to 2008, the saturation state of aragonite in the surface water of the Canada Basin decreased by 0.4 due to sea ice melt and increases in atmospheric CO2. Surveys in 2008 revealed that aragonite was undersaturated in the surface layer, with the lowest values near the centre of the Beaufort Gyre (Ωa about 0.8). Since saturation states are affected by water temperature, warming surface waters in the Canadian Basin counteracted some of the effects of ice melt and increasing atmospheric CO2. Calcite was still marginally oversaturated (Ωc of 1.1-2.0) in surface waters of the Canada Basin in 2008.

Although recent measurements of CaCO3 saturation states are offshore in this LOMA, scientists anticipate that ocean acidification will affect the continental shelf waters due to factors such as the upwelling of nutrient rich, Pacific-origin water (which has a low aragonite saturation state) across the shelfbreak.

Data from the Scotian Shelf indicates that pH has declined by about 0.1 to 0.2 units since the early 1930s, indicating that ocean acidification is ongoing. There is concern that the outflow of more acidic water from the Arctic will affect Atlantic Canadian waters downstream.

The pH of bottom waters at depths of 170 to 335 metres has decreased by 0.2 to 0.3 units over the 73 years from 1934 to 2007, which is similar to the change predicted for the open ocean over the next century. It is important to note that this decline in pH was not due to the uptake of anthropogenic CO2 from the atmosphere. Rather, it was the result of an increase in CO2 due to the decay of organic matter in the deeper waters of the estuary, which were isolated from the atmosphere during that time. Calcite is now only slightly supersaturated in the estuary while aragonite is highly undersaturated in the waters below 150 metres.

The most direct biological impact of acidification will be on marine "calcifiers" — organisms that form shells and skeletons containing CaCO3. These organisms include phytoplankton, zooplankton and other invertebrates including molluscs, crustaceans, gastropods, sea urchins and other echinoderms, and corals. Several of these groups include species of commercial importance (e.g., bivalve molluscs, oysters, clams).

When there is too much CO2 in seawater, the saturation state of CaCO33 is low (see text box on "saturation state") and organisms have to use more energy to produce skeletons and shells.

In addition to decreases in calcification, or a softening of shells, studies reveal that a more acidic ocean environment also reduces growth rates and increases mortality in some marine species. A decline in the growth of marine calcifiers such as American Lobster, Ocean Quahog, and scallops means less shellfish meat to sell and to eat. Acidification is also expected to affect the reproduction and development of marine organisms to varying degrees.

Differences in the response of organisms to reduced pH could have a considerable impact on biodiversity, marine community structure, and ecosystem goods and services. Such goods and services pertain to the value and benefits that all living things derive from healthy ecosystems. Increasing acidity may also alter the chemistry of marine waters in other ways, potentially affecting nutrient availability and toxicity of some pollutants.

There is already evidence that acidification is having negative impacts on key marine species in the Arctic (i.e., the pelagic mollusc Limacina helicina). The undersaturation of aragonite in the Gulf of St. Lawrence suggests that acidification may already be affecting biota in that ecosystem, especially in deeper waters. Laboratory and microcosm experiments conducted throughout the world show that species such as crabs and shrimps may exhibit reduced rates of net calcification and even dissolution under conditions such as those currently encountered in the St. Lawrence hypoxic waters.

If atmospheric CO2 doubles from preindustrial levels in the middle of the 21st century, it would reduce the CaCO33 saturation state by 30%, which would affect plankton and favour non-calcifying species. The reorganization of the lower food chain would have impacts on the rest of the food web.

Continued scientific research into ocean acidification is necessary to identify its impacts and drivers, which vary by location, with a view to developing a coherent response to the issue. Other studies are exploring the timing of seasonal acidification events and the potential impacts of a more acidic ocean environment on various organisms. Several international research programs are underway to examine possible impacts on pteropods, which are the most vulnerable organisms in the Gulf of Alaska because their shells are made of aragonite, the form of calcium carbonate that dissolves more readily. Plankton, which are at the bottom of the food chain and controlled by climate, should be intensely monitored as a sentinel of climate change impacts.