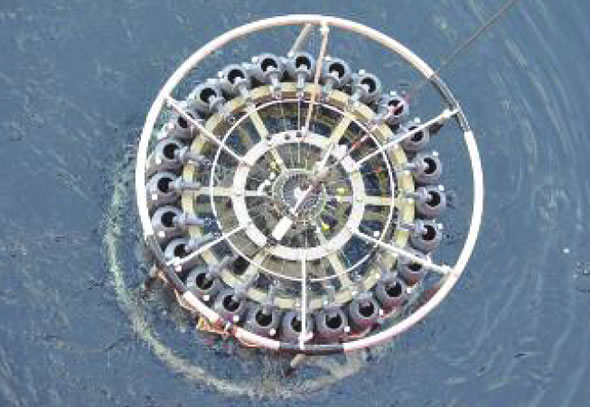 Scientists working on the CCGS Louis S. St-Laurent in the Beaufort Sea in July 2010 lowered a large instrument called a "CTD rosette" from the deck to sample the water. The CTD – which stands for conductivity, temperature and depth – is used to sample and record data about the ocean water's physical attributes including temperature, salinity, oxygen, nutrients, and alkalinity. Instruments such as this are vital to understanding processes such as hypoxia.

What is Hypoxia? Around the world, marine hypoxia — a shortage of dissolved oxygen — is a growing problem that can have dramatic impacts on marine life and ecosystems. A decline in oxygen in seawater is now recognized as one of the likely consequences of global warming, because warmer water does not hold as much oxygen. This condition may be naturally occurring or be exacerbated or directly caused by human influences. In either case, the processes involved and the resulting environmental stresses are essentially similar.

Surface waters are always rich in dissolved oxygen; however, waters below 100 to 150 metres in depth do not readily gain oxygen directly from the ocean surface. Hypoxia occurs in these deeper waters when oxygen is removed from the water much faster than it is replenished from the atmosphere or by photosynthesis. Microbial respiration due to the decay of organic material in deep water and in sediments can also contribute to hypoxia. This condition may be transient, seasonal or permanent depending on a variety of factors including local oceanographic conditions.

There is an upper limit to the amount of oxygen that can be dissolved in seawater, which depends on water temperature, salinity and atmospheric pressure. Oxygen saturation is a measure of how much oxygen is dissolved, as a percentage of the maximum oxygen concentration in seawater. For example, seawater at 10°C with a salinity of 35 and at normal atmospheric pressure is considered fully saturated (100%) when the dissolved oxygen concentration reaches 6.4 millilitres per litre (mL/L) of seawater, and 50% saturated when it reaches 3.2 mL/L.

The impact of hypoxia on living organisms depends on the concentration of dissolved oxygen as well as temperature, salinity and the tolerance of each particular species to low oxygen. Severely hypoxic waters have been referred to as "dead zones," where few macroscopic organisms can exist and commercial species are essentially absent.

Question: At what % saturation does seawater become hypoxic?

Answer: Hypoxia is generally considered to be less than 30% to 20% oxygen saturation. Each marine species responds differently to low oxygen concentration, and the term hypoxia differs depending on the species of interest. Mild hypoxia is in the range of 30-50%; severe hypoxia sets in below 10%.

In addition to the examples of hypoxia detailed below, climate change and future coastal development have the potential to cause localized hypoxia in other locations.

Along the Pacific Canadian coast, the greatest area of concern for stronger hypoxia is the continental shelf in late summer. Oxygen concentrations in sub-surface waters west of Vancouver Island have dropped in the past few decades; PNCIMA oxygen levels are somewhat higher, but there are too few observations in late summer to detect a trend.

Findings to date include:

There is concern that sub-surface oxygen concentrations might continue to decline along the west coast over the coming decades due to a potential impact of global climate warming; specifically, declining oxygen in subarctic waters caused by reduced ventilation (gas exchange between ocean and atmosphere) along the east Asian coast.

Recent and historical data reveal that hypoxia is progressively worsening in the deep waters of the Gulf of St. Lawrence, especially at the heads of the Laurentian, Anticosti and Esquiman channels. The lowest levels of dissolved oxygen were recorded in the Laurentian Channel, where measurements have routinely been in the range of 20% saturation since the mid-1980s. This hypoxia culminates a long decline in oxygen levels since 1932 (the earliest available data), when the bottom waters of the St. Lawrence Estuary averaged 38% saturation.

Up to two-thirds of the decline in oxygen saturation since 1932 is due to a higher influx of warm, oxygen-poor North Atlantic Central Water and a reduced input of oxygen-rich water from the Labrador Current. The remainder of the decline appears to be caused by increased oxygen demand in the deep water and sediments. Greater oxygen demand is possibly due to higher bacterial respiration associated with a nearly 2°C rise in the temperature of the deep water since the 1930s or with an increased supply of organic material from the ocean surface.

There is also evidence of a decrease in oxygen in the slope-derived deep waters in the Emerald Basin of the Scotian Shelf. However more data are necessary to identify the spatial and seasonal structure of the long-term trend.

Since oxygen is essential for aerobic metabolism, marine life can suffer a variety of impacts in hypoxic waters, including reduced growth rates, lower reproductive success and higher mortality. Some of these effects are evident even under mild hypoxia (30 to 50% oxygen saturation).

Hypoxia can also affect the distribution of species, since most species will leave an area well before the oxygen concentration falls to levels that might kill them. One concern in the Pacific North Coast LOMA is that even if oxygen levels in bottom water are not fatal to groundfish, these fish may still move to shallower waters where dissolved oxygen is greater, potentially depriving them of much of their preferred habitat.

The threshold at which impacts occur varies by species. Many species can thrive at oxygen levels that seriously impact others. In general, sediment-dwelling, longer-lived, immobile marine life is the most vulnerable. Larger, bottom dwelling (benthic) organisms such as lobster and sea cucumber need more oxygen and are also vulnerable in low oxygen environments, while annelid worms, molluscs and cnidarians are less sensitive. Preliminary research on Snow Crab suggests that they are quite tolerant of hypoxia; however, very little is known about its effects on crustaceans in the St. Lawrence Estuary and Gulf.

The most detailed studies into the effects of hypoxia on commercial species relevant to the current situation in the St. Lawrence Estuary have been on Atlantic Cod. Half of the fish die within 96 hours of exposure to 21% saturation, while 5% of the fish die within 96 hours when exposed to 28% saturation. Cod almost completely avoid areas of the Estuary and Gulf where near-bottom levels of dissolved oxygen are less than 30% saturation. There was also evidence of reduced feeding and growth rates (both for length and mass). Swimming performance also declines, which may reduce the ability of fish to capture prey, avoid predators and escape mobile fishing gear. Research also suggests that cod may deliberately avoid prolonged exposure to oxygen saturation levels of less than 70%.

Hypoxia also has ecosystem-level effects, including direct loss of habitat or habitat compression, altered trophic (food web) relationships, changes in migration patterns, and changes in biodiversity. Since the 1970s, there has been a substantial decline in the abundance of several groups of bottom-dwelling species in the Lower St. Lawrence Estuary (echinoderms, crustaceans), as well as the diversity and activity of benthic organisms. Whether these major changes in the ecosystem are due to hypoxia, acidification or both remains an open question.

Another concern is the interaction between acidification and hypoxia, which could make respiration more difficult for a number of organisms including fish such as cod. 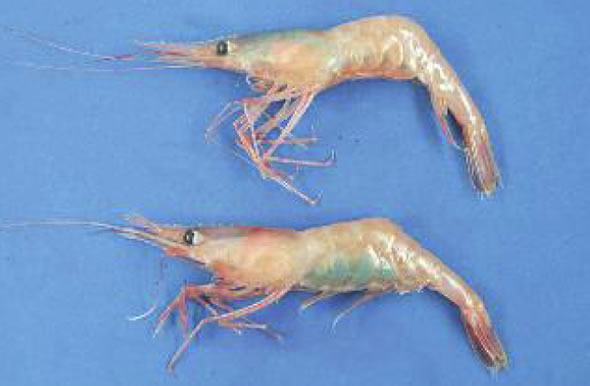 Research into the biological impacts of hypoxia is ongoing. For example, scientists are studying the impact of near-bottom dissolved oxygen levels on two other important species in the St. Lawrence Estuary and Gulf: the Greenland Halibut (Reinhardtius hippoglosoides) and the Northern Shrimp (Pandalus borealis). Both of these species inhabit deep waters and are therefore exposed to hypoxia.

Integrated, multidisciplinary research is necessary to assess the combined effects of warming, hypoxia and acidification on marine life and ecosystem structure and function in the St. Lawrence Estuary and Gulf. Continued monitoring of ecosystem variables — chemical and physical conditions, primary productivity and food web interactions — and potentially vulnerable commercial species will improve understanding of the impacts of hypoxia before significant changes occur.

In the Pacific Region, the oxygen concentrations are monitored by DFO ocean and fisheries research surveys. Future distributions of groundfish will be monitored to determine impacts of changing oxygen concentrations. NEPTUNE Canada has recently added oxygen sensors to its array of ocean instruments off the southwest coast of British Columbia to monitor changes in the future.

For more information on the causes and drivers of hypoxia (i.e., inflow of waters plus local factors) please see the regional Gulf of St. Lawrence LOMA report.