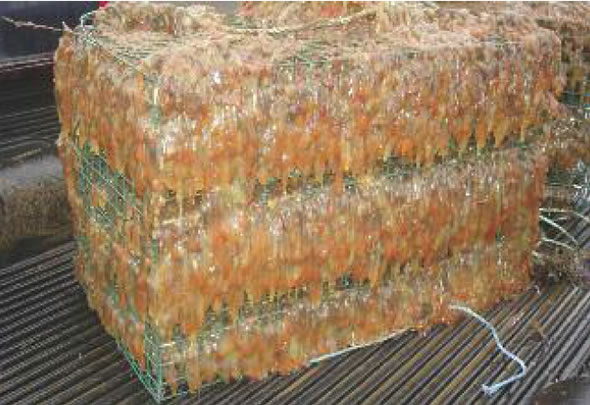 An oyster cage retrieved from a Gulf of St. Lawrence oyster operation in 2011 is loaded down with the sea vase tunicate (Ciona intestinalis).  The gelatinous ‘sea squirts’ threaten indigenous species and cause problems for growers of commercial species.

Sometimes described as “biological pollution”, Aquatic Invasive Species (AIS) are plants, animals, aquatic life and micro-organisms that can out-compete native species when introduced outside of their natural environment. These invaders generally share common characteristics that can make them difficult to control and contain, including higher rates of reproduction, fewer natural predators and the ability to thrive in different environments.

The impacts of invasive species usually worsen over time as they reproduce and disperse, posing a major, longterm threat to the health of aquatic ecosystems including native biodiversity, species at risk and the sustainability of aquaculture and fishing industries. While some are not considered harmful and may even have some commercial value, the vast majority of aquatic invasive species present an economic and social problem.

There are hundreds of invasive species in Canada, some of which come from other parts of the country and others that originate elsewhere in the world. Some better known examples of aquatic invasives are Zebra Mussels, Sea Lamprey and tunicates.

Many invasive species have been reported on Canada’s Pacific coast. Early introductions include Soft Shell Clams (Mya arenaria), which arrived in California  from the east coast of North America in the 1880s and have since spread along the coast of British Columbia, including Haida Gwaii. Populations of Manila Clams (Venerupis philippinarum) also expanded from south to north and have been abundant enough since the early 1990s to support a commercial fishery near Bella Bella. The non-indigenous Japanese Wireweed (Sargassum muticum) is also now found throughout British Columbia, including Haida Gwaii.

Other aquatic invasive species on the west coast and in the Pacific North Coast Integrated Management Area (PNCIMA) include:

Other invasive species that inhabit waters just south of PNCIMA have the potential to spread north and become established within the LOMA if environmental conditions become favourable for them.

At least 25 aquatic invasive species (AIS) have become established in the Gulf of St. Lawrence, of which nine have arrived since 1994.

The mussel aquaculture industry in the Gulf has been severely affected by several invasive tunicates and has also played a pivotal role in their spread. Management strategies have been developed to reduce the transport of AIS when seed stock is moved from one body of water to another and when harvested product is transported to processing plants.

There are at least 22 introduced or invasive species on the Scotian Shelf. Monitoring programs have focused on tunicates (Violet, Golden Star and Vase Tunicates) and the European Green Crab.

The earliest record of the Vase Tunicate in Atlantic Canada dates from 1852, but the species was not recorded in the scientific literature on the Scotian Shelf until population outbreaks occurred along the southeastern coast of Nova Scotia in the late 1990s. The species can be found in sheltered locations along the Atlantic coast of Nova Scotia, but has not been observed in the Bras d’Or Lakes. The Violet Tunicate and the Golden Star Tunicate are fouling species that attach to natural and artificial surfaces such as boat hulls and motors. The Golden Star Tunicate has been present on the Scotian Shelf and Bay of Fundy since the early 1980s, while the Violet Tunicate is a more recent arrival, with the first Atlantic Canada observation in Lunenburg and Mahone Bay in 2001.

Genetic evidence suggests that there have been two independent introductions of the European Green Crab to the Scotian Shelf. The crabs were first observed on the east coast of North America in Massachusetts in 1817. They most likely arrived from the coasts of Europe and North Africa in the ballast of ships. They then spread up the coast of New England, reaching Passamaquoddy Bay, New Brunswick, in 1951. The first reported sighting on the Scotian Shelf was in Wedgeport, Nova Scotia, in 1954.  Further dispersal up the Atlantic coast of Nova Scotia appeared to stall south of Halifax from the mid-1960s to the mid-1970s, prompting speculation that Green Crabs had reached their northern temperature limit in North America. However, by the late 1970s the crabs were reported at Whitehead, south of Chedabucto Bay, 600 kilometres north of the nearest known population. These crabs likely represented a second, genetically distinct, introduction of Green Crabs to North America. By 1997, the crabs could be found all along the Scotian Shelf at least as far north as Ingonish and had also spread into the Gulf of St. Lawrence.

In addition to the species discussed above, the marine algae known locally as Oyster Thief (Codium fragile) has substantially changed coastal ecosystems in Atlantic Canada. It was first observed in coastal waters of the Scotian Shelf in 1989 at Mahone Bay. By 2007, it had become established along 445 kilometres of coast. Codium may replace native marine algae, such as kelp, and thus affect the sea urchin-kelp bed dynamics of the Atlantic coast ecosystem. The replacement of kelp beds by Codium has been facilitated by another invasive species, the Coffin Box Bryozoan (Membranipora membranacea).

To date, four Aquatic Invasive Species have been confirmed in these waters: the Violet and Golden Star Tunicates, the Coffin Box Bryozoan and the European Green Crab.

Control of Green Crab is a conservation priority in this area. Although reports of this species in the Maritimes date back to the 1950s, it was first reported in North Harbour, Placentia Bay, Newfoundland in 2007. Its arrival in the region is mostly likely due to vessel traffic.

There are now extremely large concentrations of Green Crabs in northern Placentia Bay and they are spreading rapidly throughout the bay. Populations have also been established in St. George’s Bay on the western side of the island. Accurate population estimates are vital for establishing the levels of response measures, for determining the thresholds at which impacts may occur, and for measuring the success of control efforts. See: Ecological Assessment of the Invasive European Green Crab (Carcinus maenas) in Newfoundland 2007-2009 (CSAS SAR - 2010/033) . 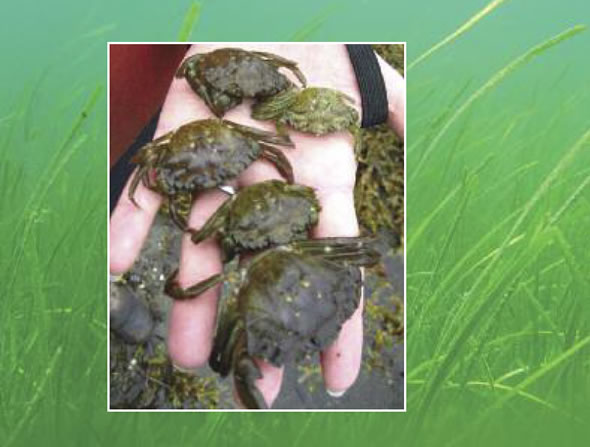 The European green crab (Carcinus maenas),  native to several European coastal areas, recently arrived in Newfoundland waters. It is adapting and expanding rapidly in its new environment. There is concern that green crab may damage eelgrass habitat: when digging for prey in the sediment or making burrows, green crab cut the roots of the eelgrass, which destroys this ecological habitat. Photo: DFO

In general, there are three broad categories of impacts from introduced marine species: ecosystem, economic and human health impacts.

Ecosystem impacts include effects on individuals, genetics, population/community dynamics and ecosystem processes. These impacts can range from localized to larger-scale regional impacts and may occur separately or in combination for any species or group of species. In coastal ecosystems, invasive species have the potential to disrupt food web relationships, reducing the productivity of oysters, eelgrass and other keystone species that play a critical role in maintaining the structure of ecological communities. Since invasive species disturb the ecosystem, an infestation can make it easier for new intruders to become established.

In general, economic impacts of non-native species may include costs associated with management, damages incurred due to fouling of equipment and vessels, aesthetic and/or recreation impacts, and losses related to impacts on fisheries or aquaculture resources. For example, the most commonly reported impacts of tunicates in the Gulf of St. Lawrence are that they dramatically increase the weight on growing mussel socks, farm structures and equipment used in mussel aquaculture, and can result in smothering and killing farmed mussels. In Atlantic Canada, the Vase Tunicate has caused fouling problems on mussel farms and losses to the shellfish industry in Nova Scotia.

Aquatic invasive species also have the potential to affect human health. In some places, disease-causing micro-organisms including harmful phytoplankton have been found in vessels’ ballast water, which could potentially be discharged into local waters. Toxins in these species can become concentrated in shellfish and negatively affect human health.

Green Crabs are aggressive, fast, prolific breeders that can easily out-compete native crabs and have no natural predators in their adopted waters. Virtually all nearshore, bottom-dwelling organisms may be affected by predation or competition from this invader. They can also damage eelgrass beds and other ecologically and biologically significant habitat as they dig for prey or shelter, potentially reducing habitat for shellfish stocks and nurseries for juvenile fish.

In areas of Placentia Bay-Grand Banks where Green Crabs are in high abundance, there has been a substantial impact on the natural environment and commercial and non-commercial species of molluscs and crustaceans. As in other regions, the predominant prey of these crabs in Newfoundland waters is shellfish. They have also been known to prey on juvenile and trapped adult American Lobster (Homarus americanus).

Threats to fisheries from the European Green Crab include, but are not limited to, predation on bivalves, competition with other decapods, and damage to eel fisheries. The levels of impacts on the Scotian Shelf appear to be increasing in recent years based on anecdotal accounts. This increase is likely to continue due to a recent genetic shift in the Green Crab population structure. If populations of the more aggressive northern genotype continue to increase in southern Nova Scotia, it is likely that the impacts of Green Crabs in this area will also increase.

The recent invasion of Green Crabs in the marine protected area of Basin Head, Prince Edward Island, is being investigated as a possible cause of the decline of a unique type of Irish Moss that is not found anywhere else in the world.

Intense trapping can be an effective method of reducing the abundance of Green Crabs to limit their impact on the environment. However, threshold levels of population densities, timelines for action relative to impact, and measures of success will need to be well-defined for specific environments.

The Government of Canada has strategies in place to reduce the risk of invasive species to the environment, economy and society, and to promote environmental values such as biodiversity and sustainability. For more information, see: http://www.invasivespecies.gc.ca/