In Canada, cold-water corals (also known as deep-sea corals) and sponges are known to inhabit the Pacific, Atlantic and eastern Arctic oceans. These organisms are increasingly being recognized as important components of benthic or bottom marine ecosystems. They provide the complex habitat structure that is important to invertebrates, fish and other deep sea life. High-complexity sponge reefs are associated with a greater abundance and diversity of species.

Increasing ocean acidification due to climate change is also a threat.

Due to their ecological importance and vulnerability, corals and sponges are the focus of international conservation and protection efforts and are examples of Vulnerable Marine Ecosystems (VMEs). Countries have a responsibility to implement conservation measures as defined in international conventions and agreements such as the Convention on Biological Diversity and United Nations General Assembly Resolution to protect VMEs.

For general information on corals and sponges, see the website for the Centre of Expertise for Cold-Water Corals and Sponge Reefs. The Department also produced three videos about exploring for cold water corals: Oasis of the Deep: Cold Water Corals of Canada and Revealing a Hidden Realm are online. The third video, Diving into the Deep - Coral and Sponge Conservation in Canada, will be online soon.

Since the early 2000s, scientists have been studying coral and sponges in the Newfoundland and Labrador region including specimens collected as trawl bycatch during multispecies surveys and the At-Sea Observer Program, for which private sector observers are placed aboard fishing vessels to report on activities. Other research projects have explored the biochemistry, habitat and geography of corals, and the importance of deep-sea corals to the structure and function of ecosystems, including their distribution, the relationship between corals and fish species, and trophic (food web) relationships. Results of these studies are available in: The Ecology of Deep-Sea Corals of Newfoundland and Labrador Waters: Biogeography, Life History, Biogeochemistry and Relation to Fishes.

In 2009, the research program was expanded to include ecological and taxonomic studies of deep-water sponges, which are now recognized as components of VMEs along with corals.

In 2007 and 2010, two dedicated deep-water research cruises were carried out to explore and document the biology and geology of the ocean bottom of the Southwest Grand Banks slope and areas adjacent to the Placentia Bay – Grand Banks LOMA (Flemish Cap and Orphan Knoll). Using the remote underwater vehicle, ROPOS (Remotely Operated Platform for Ocean Science), scientists carried out studies of deep-water ecosystems that support corals, including the first study of a seamount in the region.

Researchers analyzed concentrations of coral and sponge taxa (groups) for the Newfoundland-Labrador Shelves Bioregion, which encompasses the Placentia Bay-Grand Banks area, using an approach developed by the Northwest Atlantic Fisheries Organization. The coral database for this bioregion contains 38 coral taxa, of which:

The largest catches of small gorgonian corals were on the Newfoundland and Labrador Shelf with two “significant” locations on the slope of the Grand Banks. Significant concentrations of large gorgonian corals also exist within the LOMA along the continental margins.

Although relationships between deep-sea corals and groundfish have not been extensively studied in the Northwest Atlantic, research indicates:

In 1998, Fisheries and Oceans Canada began collaborating with university, non-governmental organizations and industry partners to collect information on corals in the Scotian Shelf region. The Department initiated a full coral research program in 2000, which included four research surveys on the Scotian Shelf to document the distribution, abundance, preferred habitats and condition of corals and the associated species. For more information see the Department’s web page on Coral Research in the Maritimes.

To date, five major orders of coral are known to inhabit the Scotian Shelf, including: soft corals (Alcyonacea), black/thorny corals (Antipatharia), branching corals (Gorgonacea), sea pens (Pennatulacea), stony corals and cup corals (Scleractinia). The Scotian Shelf is also home to sponges, but the overall biomass is relatively low. Sponge grounds here are typically composed of one or two large, structure-forming species and many smaller but abundant species. Unique populations of the large, barrel-shaped glass sponge Vazella pourtalesi (also known as “Russian Hats”) have been found in the vicinity of Emerald Basin and Sambro Bank as well as parts of the Northeast Channel.

Deep-sea corals and sponges form complex structures on the Scotian Shelf that:

More than 80 species of cold-water corals and some 250 species of sponges inhabit the coastal waters of British Columbia. The Pacific North Coast Integrated Management Area (PNCIMA) is home to many of these, including the rare hexactinellid (glass) sponge reefs. Some of the coral colonies may be more than a century old, while some sponge reef communities may have developed over thousands of years. For example, in Hecate Strait and Queen Charlotte Sound (within the LOMA), sponge reefs that are approximately 9,000 years old live in channels carved by icebergs long ago.

Found in both shallow coastal and deep offshore waters, these organisms provide many ecosystem functions that are not yet fully understood. Cold-water corals and sponges host distinctive communities of fish and other species while sponge reefs provide important nursery habitat for young rockfish.

For more information about corals and sponges in this area, see the CSAS report: Distribution of cold-water coral, sponges and sponge reefs in British Columbia with options for identifying significant encounters. (CSAS ResDocs - 2010/090)

Corals and sponges are vulnerable to anthropogenic disturbance due to their slow growth and sensitivity to physical and chemical changes. Adequate protection is necessary to prevent the loss of these ecologically important species and the valuable habitat they provide for other marine life.

On the Scotian Shelf, for example, evidence of fishing impacts on corals includes broken live corals, tilted corals, scattered skeletons, tracks made by fishing gear where corals occur, and lost longlines entangled in corals. Other types of fishing gear can also disturb and damage bottom habitat and cause entanglement and breakage of bottom features such as corals.

Increasing ocean acidification is a threat to organisms that produce calcite and aragonite shells or structures, including corals, pteropods and shellfish.

In order to deliver this mandate, the Centre has built a strong network within Fisheries and Oceans Canada, Parks Canada and Natural Resources Canada. For more information, see: Status Report on Coral and Sponge Conservation in Canada.

The Department carried out a national science advisory process which was convened in March 2010 to review the available information and provide science advice, concerning the occurrence, sensitivity to fishing, and ecological function of corals, sponges and hydrothermal vents in Canadian waters. Another national science advisory meeting held in March 2011 provided advice for the development of a protocol regarding encountering corals and sponges in Canadian waters. This advice is available through a Science Advisory Report, which is available on the CSAS website.

Corals and sponges are one of the four conservation priorities in the Placentia Bay-Grand Banks area. Priority research areas for deep-sea corals have been identified based on areas of high biodiversity and abundance in the Region. Management measures for their protection are ongoing. Work is also underway to increase regional expertise in the identification of sponges and to learn more about their biology and ecology.

To date, several dedicated areas in the proximity of the Region, including some in the Placentia Bay-Grand Banks area, have been closed to fishing due to the presence of corals and sponges. Closures include:

The Department has also developed a Maritimes Region Coral Conservation Plan, which summarizes the conservation efforts to date, identifies issues that require more work, and prioritizes activities to address coral conservation in the future.

To protect these rare and sensitive components of Canada’s west coast marine ecosystem, the Department developed the Pacific Region Cold-Water Coral and Sponge Conservation Strategy, which: 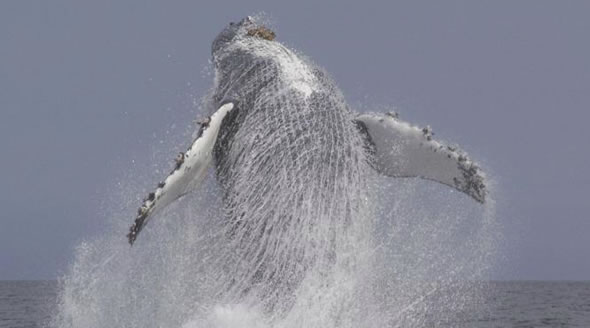 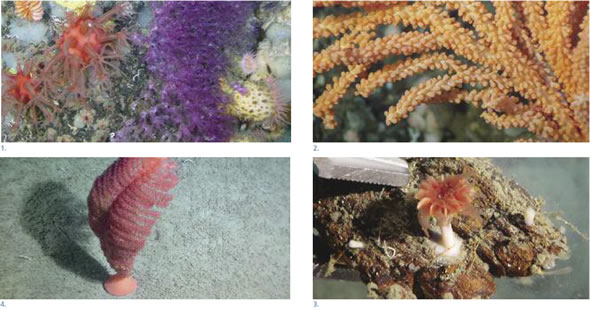 Coldwater corals of Atlantic Canada. Photos: 1. Many different species of coral are captured in this ‘garden’ of coral’ found in the deep waters along the continental slopes below the Stone Fence Lophelia Conservation Area; 2. Seacorn (Primnoa resedaeformis) growing on a cliff face in the Sable Gully Marine Protected Area. This species has been aged to 800 years and is very slow growing. 3. A solitary cup coral (Javania cailleti), off the coast of Nova Scotia 4. A spectacular soft coral “sea pen” so-called for its resemblance to old-fashioned quill pens, (order Pennatulacea) was found in the Sable Gully Marine Protected Area.