The area covered by sea ice grows in the winter and shrinks in the warmer months. Marine life is closely linked to this seasonal cycle. In addition, ice conditions are characterized by inter-annual variability in extent, duration, thickness, condition (i.e., fragility) and mobility, which are influenced by a range of factors or drivers. A decline in the extent of the ice-covered area will increase the amount of energy entering an ecosystem because sea ice reflects 80 percent of sunlight back into space while a dark ocean surface absorbs 90 percent of sunlight.

As global climate change alters this important component of marine ecosystems, there will be inevitable shifts in the marine food web, putting some species at risk while benefitting others. Changing sea ice can also have impacts on traditional subsistence cultures, coastal communities and other infrastructure, and human activities such as subsistence hunting and fishing, marine shipping, and oil and gas exploration and development. Understanding these changes and their potential impacts is critical toward the development of ecosystem approaches for marine resource management and mitigation and adaptation strategies for northern communities and various social and economic activities.

It is important to note that sea ice trends within a particular Large Ocean Management Area (LOMA) or other ocean region may differ from whole Arctic observations.

Even though the Gulf of St. Lawrence has some of the warmest surface water in Atlantic Canada during the summer, the region also has the most southerly seasonal sea ice during winter.

Winter air temperatures over the Gulf are a key factor that drives the formation of sea ice cover, since cold air combined with strong winds extract heat from the ocean surface. The ice begins forming in early to late December and reaches its greatest extent and volume by early March. Since sea ice is more fragile during its early growth period, storms, thaws and other events can prevent the ice from reaching its full thickness and coverage potential for the season. Storm and thaws can also affect the timing of ice breakup in the spring.

In the winter of 2010, the Gulf of St. Lawrence had the least amount of ice coverage (virtually none) since the Canadian Ice Service began gathering data in 1969. The rare conditions were attributed to the warmest air temperatures on record in the Gulf since 1945. Ice-free winters are likely to occur more regularly due to climate change; however interannual variability will likely ensure there will be sea ice present during many winters over the next few decades.

Sea ice extent and duration on the Newfoundland and Labrador Shelf was below normal in 2010 for the 15th consecutive year, with the annual average reaching a 48-year record low. The International Ice Patrol of the U.S. Coast Guard reported that only one iceberg drifted south of 48º north latitude onto the Northern Grand Bank during 2010 compared with 1,204 in 2009.

Sea ice is influenced by the North Atlantic Oscillation (NAO), a large-scale variation in atmospheric pressure over the North Atlantic Ocean and a key indicator of climate conditions in the region. Variations in the NAO can directly or indirectly affect ice flow, ocean temperature, the strength of the Labrador Current, and the distribution and biology of marine species. A high NAO index generally indicates colder water temperatures, stronger northwest winds, cooler air temperatures, and heavy ice sea conditions, which was the pattern for the majority of the 1980s and 1990s. 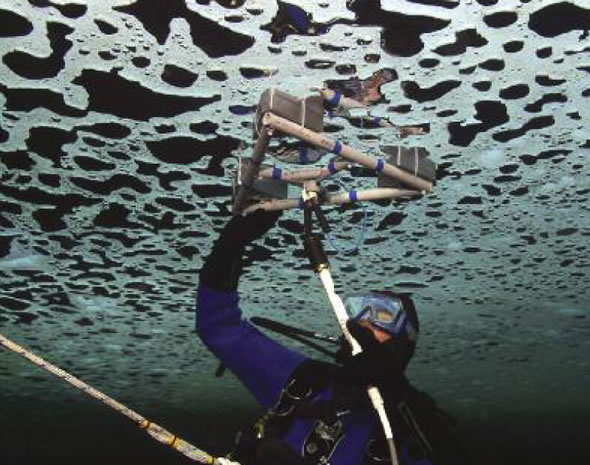 Understanding the role of ice in the marine ecosystem is a major challenge. In Franklin Bay, a large inlet of the Amundsen Gulf, in the southeastern Beaufort Sea (Northwest Territories), a diving specialist positions an ultra-sensitive light meter beneath two metres of Arctic sea ice to learn more about life on the under-side of the sea ice. Photo: Jeremy Stewart, DFO. 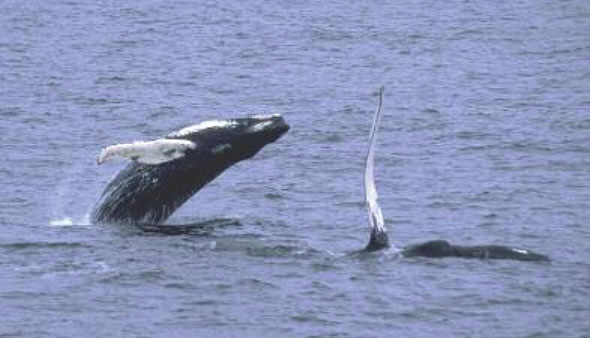 Humpback whales in the Gulf of St. Lawrence. Photo: DFO

Since the late 1990s, there has been a dramatic reduction in the extent and age of multi-year sea ice in the Arctic Ocean including the northwestern portion of the Beaufort Sea LOMA. A reduced expanse of multi-year ice implies a greater expanse of ice-free water in August and September. Summertime ice cover is the most important environmental control in the Beaufort marine ecosystem. Moreover, younger pack ice is thinner and weaker and may be more responsive to wind stress.

Therefore, a thinner arctic ice pack can influence ocean circulation and the distribution of surface salinity, with consequences for the marine food web. Although multi-year ice is clearly less common in the Arctic Ocean than two decades ago, observations reveal no trend in the thickness of first-year ice.

Other characteristics of sea ice conditions in the Beaufort LOMA during the last five years include:

There are 30-year trends towards a reduced presence of sea ice over the Mackenzie Shelf, in Amundsen Gulf and in the Canadian sector of the Canada Basin. However, these trends are small relative to the magnitude of inter-annual variations.

Variations in sea ice can have far-reaching impacts on marine ecosystems, including ocean characteristics (i.e., water layers and mixing), food webs, and the distribution, habitat and survival of marine life. For example, ice could have direct and indirect impacts on the survival of the 16 species of whales (cetaceans) and seven species of seals that inhabit the St. Lawrence Estuary and Gulf either seasonally or throughout the year. Changes in ice cover, freeze-up and melt patterns may affect the availability of zooplankton and other food resources for fish. Ice may limit access to the surface or reduce the available foraging habitat for some marine mammals while providing other species with a platform for breeding and resting. Ice movement could also lead to the entrapment of whales.

It is difficult to predict how marine mammals will respond to changing ice conditions. In the St. Lawrence Estuary and Gulf, a reduction in total ice cover and stability has the potential to:

Since 2002, the Joint Ocean Ice Studies (JOIS) has carried out an annual expedition to the Beaufort Gyre, a clockwise circulation (looking from above the North Pole) in the Beaufort Sea north of Alaska. This circulation is the result of a strong high-pressure system that creates winds over the region.

Since 2003, the surface waters of the Beaufort Gyre have been freshening (becoming less saline), a trend that has been linked to wind-induced convergence of low salinity water at the surface and to the melting of thick, multi-year ice. Reduced ice cover over the gyre means there is more open water. The darker open water surface absorbs more energy from the sun, causing the surface water to warm and reducing sea ice.

Since warmer water is less dense (lighter) than cold water, and fresher water is lighter than salty water, the ocean here is becoming increasingly stratified. Increased stratification reduces water column mixing and the movement of nutrients into the surface layer. It is in this sun-lit, near-surface zone that the foundation of the marine food web, phytoplankton, grows. Greater stratification has led to an increase in the smallest algae (picoplankton) in the Canada Basin, both in total amount and as a percentage of total phytoplankton and a decrease in larger nanoplankton, which has the potential to alter other parts of the food web.