Appendix A: Biology of Corals and Sponges in Eastern Canada 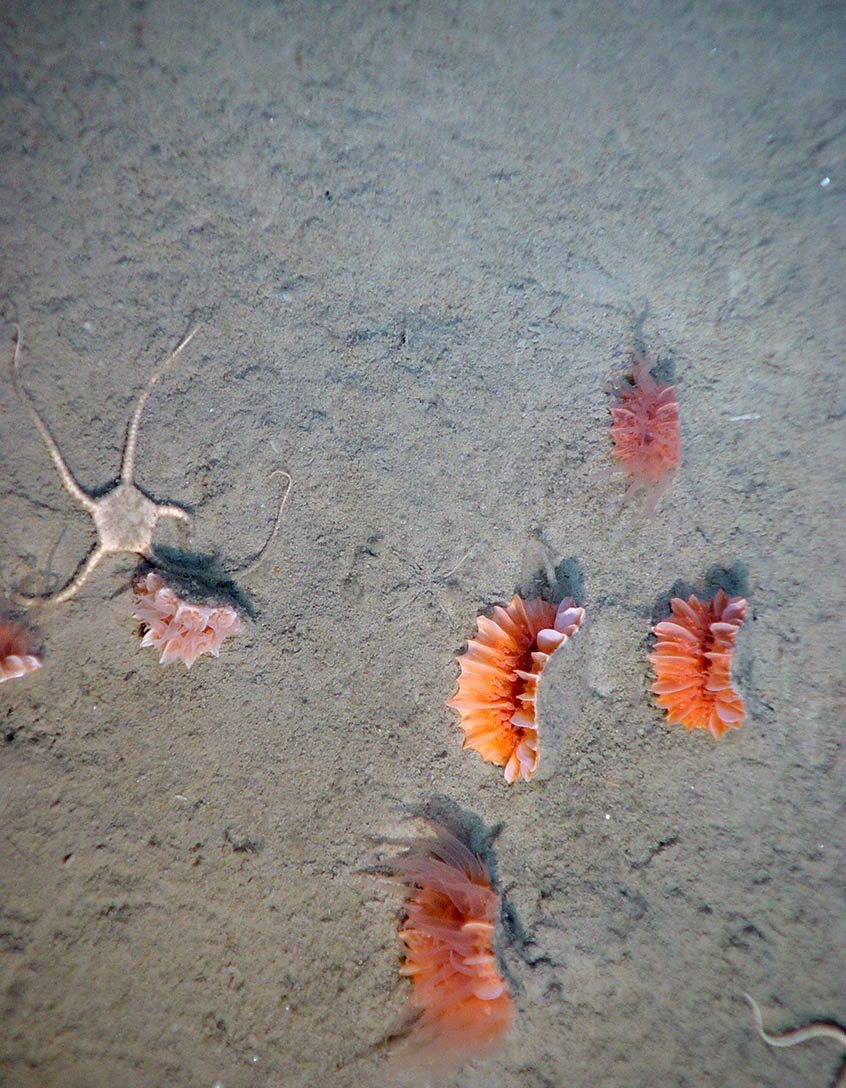 There are many gaps in our understanding of the general biology of cold water corals and sponges including limited information on the distribution, age of maturity, fecundity, reproduction and recruitment, resilience and resistance to damage, as well as rates of recovery (Wareham 2010; Roberts et al. 2009, Hogg et al. 2010).

The term “coral” is generally used to describe a group of marine organisms having marine polyps that produce calcium carbonate secretions that form hard parts or skeletons. Each polyp is composed of a ring(s) of tentacles used to capture food, a mouth to eat, and a tube (actinopharynx or stomadem) leading to a central gastrovascular cavity (coelenteron) to digest food. Corals can be solitary or colonial with many genetically identical polyps (Wareham 2010). With respect to soft corals, sea fans and sea pens, the skeleton lies within the body wall of the polyps. This inner skeleton helps strengthen the coral while maintaining flexibility. The stony corals have employed a different tactic: each polyp secretes a cup-shaped skeleton around itself forming a hard outer covering. Both soft and stony corals can support massive colonies, and the bubblegum coral Paragorgia arborea, has been recognized as the world’s largest marine invertebrate species, with confirmed reports of colonies reaching six metres in height and unconfirmed reports of 10 metres. Coral colonies also provide habitat for many fish and bottom-dwelling creatures, like sea stars, shrimp, and anemones (Baillon et al. 2012).

Corals depend entirely on ocean currents and other oceanographic processes to transport food to them such as zooplankton and detritus, which has been imported from the water column near the water surface (Sherwood et al. 2008). Currents not only carry food but also prevent accumulation of silt, which can smother the polyp (Roberts et al. 2009).

Coral habitats can range from the inter-tidal zone to depths of approximately three km or deeper. Corals are usually established after the settlement of coral larvae on a suitable substrate. Substrate preferences are species-specific, based on availability of hard or soft substrates as well as the physiology of individual species.

For non-reef building corals, species can be fixed to hard substrates by a holdfast or anchored in soft substrates by root-like appendages. The habitats created can range from micro-habitats between the branches of large individual colonies or macro-habitats between colonies when many coral colonies are concentrated within a specific area. For the latter, the type of habitat created can vary in size and scope from monotypic dominated by one or two species (e.g. sea pen fields, Keratoisis thickets), to polytypic with many species represented (e.g. coral gardens, or gorgonian forests).

For reef-building corals like Lophelia pertusa found on the Scotian Shelf, reefs are established as new polyps grow on top of older polyps. As the reef increases in size, the skeleton of the reef becomes vulnerable to bioerosion and breakage. If coral growth keeps pace with sediment infill, localized mound or reef formation is initiated. Corals are usually found in areas with currents, or in areas on the continental slope where internal tidal waves enhance seabed food supply (Roberts et al. 2006).

With respect to growth rates and longevity, studies of some gorgonian (i.e. sea fans) corals suggest a growth rate of 5-26 mm/yr with lifespans of 100 to 200 years for mature colonies while some Lophelia spp. reefs have structures which are estimated to be over 8,000 years old, making them some of the oldest reef complexes on the Earth (Roberts et al. 2006). Sherwood and Edinger (2009) estimated growth rates of corals found off Newfoundland and Labrador at approximately less than two centimeters per year vertically. Recent radiocarbon age studies of some corals collected off Newfoundland and Labrador showed that lifespans ranged from 40 years for one live-collected coral and up to 270 years for another subfossil specimen (Sherwood and Edinger 2009).

Most knowledge of coral reproduction is from tropical species with very little known about deep-sea species (Wareham 2010). Sexual reproduction can be either hermaphroditic with male (spermatocysts) and female (oocytes) gametes located on the same colony, or gonochoristic with male and female gametes located on different colonies (Richmond and Hunter 1990; Waller and Tyler 2005). In the northwest Atlantic, nephtheid soft coral fertilization was found to be internal with the peak breeding season between November and February (Sun et al. 2009). Asexual reproduction in other coral species can occur by division of an existing polyp or by fragmentation, whereby pieces of a parent colony break off and form new colonies.

Information on sponge distribution in eastern Canadian waters is limited, primarily collected from fisheries observers and research trawl surveys (Campbell and Simms 2009, Kenchington et al. 2012). Sponges are aquatic animals with a fossil record that dates back over 580 million years (Hogg et al. 2010). These organisms lack organs but have specialized cells and a collangenous matrix. Their bodies are organized around a simple or complex aquiferous system, making them highly effective filter feeders (ICES 2009, Hogg et al. 2010). This system of canals and chambers allows water to be pumped in and out to supply food and oxygen and remove waste; this system is also used as a mechanism for the transport of reproductive elements (Hogg et al. 2010).

On Canada’s Atlantic coast, at least 34 species of sponge have been identified, although it is expected that this list will be substantially expanded in future years. Recently, 25 species have been identified as habitat-forming and a full list of these species and their distributions are currently being documented (ICES 2009).

Sponge habitats can be found in every ocean from depths ranging from the inter-tidal zone to deeper than eight thousand meters (Hogg et al. 2010). Adult sponges are largely sessile and live in an attached position where a firm substrate is provided, such as rocky ocean bottom. The distribution of sponge grounds broadly conforms to environmental conditions conducive to their growth, such as current strength for food supply and substrata needed for recruitment and growth, such as rocky or biogenic hard substrata. However, sponges may also inhabit sandy or muddy sediments (ICES 2009).

Sponge reefs found in Canadian waters can be up to 9000 years old with individual sponges being up to 100 years of age and older. Sponges can undergo growth, shrinking, division, and fusion (Hogg et al. 2010). The growth rates of sponges vary due to their ability to change in response to environmental factors, therefore relying on body size is not a reliable indicator of age, but age can be determined by carbon and strontium isotopic dating (Hogg et al. 2010).