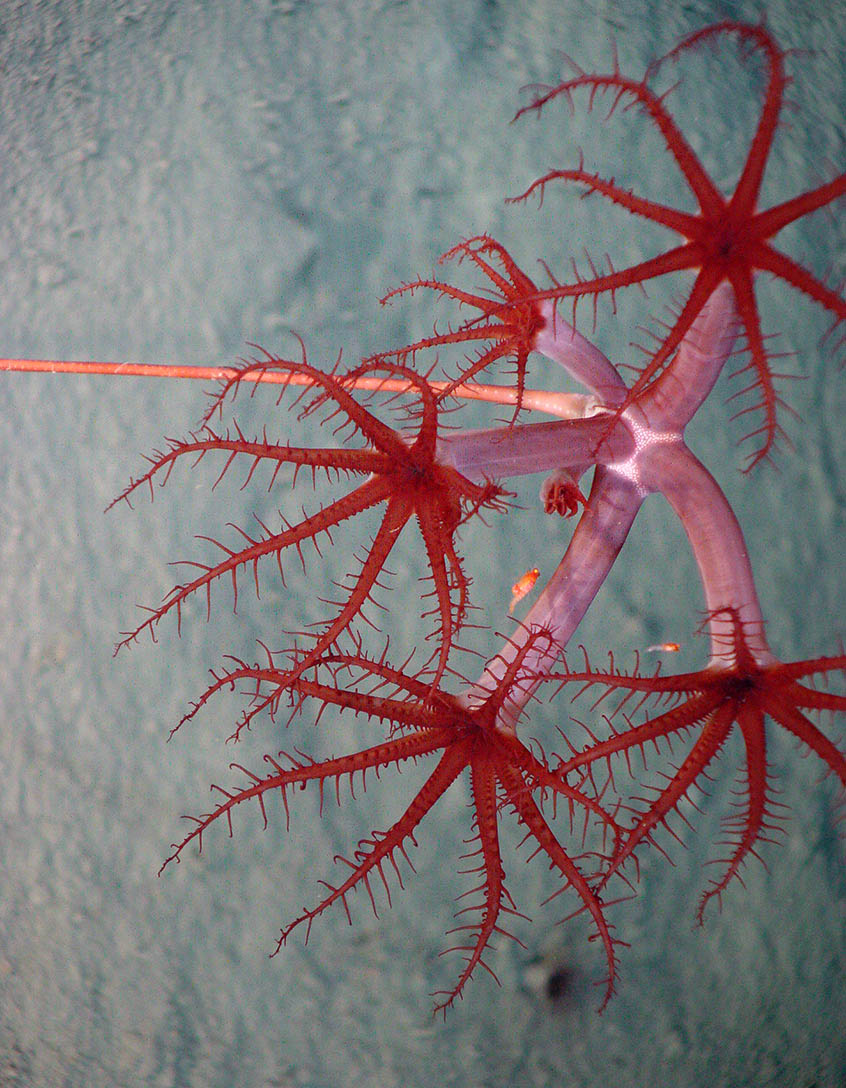 The Government of Canada is committed to conserving and protecting our oceans to preserve healthy and productive ecosystems for the benefit of current and future generations. As such, there are numerous pieces of legislation that apply to the conservation and protection of corals and sponges. Within the Government of Canada, DFO is the lead federal department responsible for research and conservation of coral and sponge species. The national legislative and policy context for the Strategy can be found in the Oceans Act and the Fisheries Act, as well as the Department’s mandate and mission. These Acts set out the powers, duties, and functions of the Minister of DFO that are applicable to the conservation and protection of corals and sponges. There are additional government policies that will influence implementation of the Strategy, such as the Policy to Manage the Impacts of Fishing on Sensitive Benthic Areas (DFO 2009a). Other operational guidance provides further clarity and direction in implementing these legislated responsibilities.

Additional pieces of federal legislation, such as the Species at Risk Act, the Canadian Environmental Assessment Act and the Canada National Marine Conservation Area Act, may also relate to coral and sponge conservation. Unlike the Fisheries Act and Oceans Act though, responsibilities for these Acts are shared with other departments and agencies. Table 2 outlines national legislation and provides a description of some of the ways in which these commitments link to coral ­­­and sponge or benthic conservation.

Within DFO, various programs have responsibilities with respect to corals and sponges, directed by the legislation outlined below. In each of the regions, Oceans, Science, and Fisheries Management work together on complementary programs which further the understanding, conservation, and management of corals and sponges in eastern Canada. While these programs have varying mandates, a major commonality is the principle that conservation, based on an ecosystem approach, is of fundamental importance to maintaining biological diversity and productivity in the marine environment. Ecosystem-based management is the management of human activities to ensure that marine ecosystems, their structure, function and overall environmental quality are not compromised. This principle aligns Oceans, Science, and Fisheries Management together in the Coral and Sponge Conservation Strategy for Eastern Canada.

In 1997, Canada became the first country in the world to adopt comprehensive legislation for oceans management. By passing its Oceans Act, Canada made a legal commitment to conserve, protect and develop the oceans in a sustainable manner. Canada’s Oceans Act is founded on three principles of sustainable development, integrated management, and the precautionary approach.

In 2002, Canada released its Oceans Strategy (DFO 2002) outlining the government’s vision and direction for modern oceans governance. The overarching goal of the strategy is ensuring healthy, safe and prosperous oceans for the benefit of current and future generations of Canadians. On behalf of the federal government, the Minister of Fisheries and Oceans is called upon to fundamentally change the way we use and manage our oceans by providing policy direction for integrated oceans management; calling for coordination of policies and programs within and across governments; and advocating an ecosystem approach to ocean resource management and environmental assessment.

Ecosystem-based management is an integrated or holistic approach to making decisions about ocean-based development and conservation activities. It means considering the environmental impact of an activity on the whole ecosystem, not simply the specific resource targeted. It also means taking into account the cumulative impact of all human activities on the ecosystem within that area. This is different from past management approaches that focused on a single species or single economic activity.

The table is comprised of two columns listing relevant Canadian legislation in column 1 and descriptions of each in column 2.

Building on existing fisheries management practices, Canada’s Sustainable Fisheries Framework (DFO 2009b) forms a foundation for implementing an ecosystem approach in the management of its fisheries. This includes using new policies and tools to implement the precautionary approach to fisheries management decision making, and manage the impacts of these fisheries on sensitive benthic areas, bycatch and forage species. This sector is responsible for a variety of fishing closed areas that have primary benefits for corals and sponges.

Of particular importance is the Policy to Manage the Impacts of Fishing on Sensitive Benthic Areas (DFO 2009a). The purpose of this policy is to help DFO manage fisheries to mitigate impacts of fishing on sensitive benthic areas or avoid impacts of fishing that are likely to cause serious or irreversible harm to sensitive marine habitat, communities, and species. Furthermore, an Ecological Risk Assessment Framework (ERAF) specific to cold water corals and sponges outlines a process for identifying the level of ecological risk of fishing activity and its impacts on sensitive benthic areas in the marine environment (DFO 2013).

Aquatic ecosystems are increasingly affected by human activities. Limiting possible damage and making human activities more sustainable is the complex task of policymakers and managers who, in turn, rely on scientists for advice on which to base their decisions. Ecosystem science is the foundation for the science needed to support the integrated ocean management of diverse human activities, such as fishing, aquaculture, transportation, and oil and gas exploration that are regularly undertaken in the same area.

At its first meeting in October 2005, the Science Management Board confirmed that the highest priority for DFO Science is providing scientific support for ecosystem-based management. In response, the Ecosystem Science Framework in Support of Integrated Management (DFO 2007) was developed to realign its focus to ensure the long-term stability of the monitoring and data management programs, and to maximize flexibility in the area of research and the provision of products, services, and, particularly, scientific advice to respond to changing needs.

The Strategic Program for Ecosystem-Based Research and Advice (SPERA) supports those objectives with research projects and scientific tool development which support national priorities for managing ecosystems in Canada’s domestic waters. Projects address key issues, such as scientific guidance on the avoidance of benthic impacts; science support for mitigating by-catch and tools to help manage biological diversity in Canadian waters. There are three types of SPERA funded projects: assessing ecosystem impacts of human activities; assessing and reporting on ecosystems; and tools for implementing the ecosystem approach.

The International Governance Strategy (IGS) Science program, formerly known as the International Fisheries and Oceans Governance Strategy (IFOGS), is a component of a larger multi-sectoral program which has the objectives to ensure 1) sustainable fisheries and 2) robust marine environmental and ecosystem sustainability. Under the funding theme ‘Science in Support of Protecting High Seas Marine Habitat and Communities’ this program has provided substantial on-going support since 2005 for research on corals and sponges throughout the geographic region covered by the present strategy.

Integrated Management (IM) initiatives align with existing policies outlined by DFO’s Oceans, Science and Fisheries Management programs. Parliament has set out an agenda for sustainable development of our oceans based on a balanced approach to development and conservation of oceans resources through integrated management. Canada’s Oceans Act and Oceans Strategy assign a number of responsibilities to the Minister of Fisheries and Oceans.

In 2005, Canada adopted its Oceans Action Plan (DFO 2005): a government-wide commitment to our oceans. One of the core commitments of Canada’s Oceans Action Plan is to IM. As a means to achieve IM, Canada has defined 13 bioregions which serve as the ecological reference base for ecosystem-based oceans management decisions (DFO 2009c, GOC 2011). These bioregions comprise the spatial planning framework for Canada’s national network of Marine Protected Areas (MPAs), of which coral and sponge areas will be an important component. Federally, the 1997 Oceans Act assigns responsibility to the Minister of Fisheries and Oceans to lead and coordinate development and implementation of a national system (or network) of marine protected areas on behalf of the Government of Canada, within the context of integrated management of estuarine, coastal and marine environments. DFO, PC, and EC are working collaboratively on the national MPA network. Four of these bioregions (plus the NAFO areas 2, 3, and 4) make up the geographic scope of this Strategy (Figure 2): the Eastern Arctic, the Newfoundland-Labrador Shelves, the Scotian Shelf and the Gulf of St. Lawrence bioregions. Coral and sponge conservation will be a main focus in the identification of areas for the network (GOC 2011).

A strategic framework has been released for each LOMA for a variety of stakeholder-based priorities, which include corals and sponges. In addition, the Maritimes Region Coral Conservation Plan (DFO 2006a) was completed in support of the plan objectives for the Scotian Shelf.

Scientific overviews and assessments were completed for each LOMA to serve as the basis for objective setting exercises with affected and interested stakeholders. A key part of the scientific review involved the identification of ecologically and biologically significant areas (EBSAs), and this work continues at the bioregional scale.

EBSAs which are areas of particularly high ecological or biological significance that should receive a greater-than-usual degree of risk aversion in management have been identified in an effort to identify conservation priorities and facilitate action planning. In many cases, EBSAs inform the Area of Interest (AOI) process that identifies potential sites for MPA designation. Examples of current AOI processes include Laurentian Channel in Newfoundland and Labrador DFO Region, and St. Anns Bank in the Maritimes DFO Region. Certain coral and sponge concentrations clearly qualify as EBSAs due to the structure providing role they play in benthic ecosystems and their vulnerability to disturbance (Freiwald et al. 2004; Roberts et al. 2009). The southeast corner of NAFO Division 0A has been identified as the Southern Baffin Bay EBSA (DFO 2011) which supports concentrations of corals (including gorgonian and antipatharian species).

The IM planning units described above are one of the ways in which Canada’s commitments, policies, and legislation are implemented at the regional level. By collaborating with stakeholder committees, the Government of Canada is helping to coordinate oceans and coastal management decisions among government agencies which will ensure healthy coral and sponge ecosystems are maintained through responsible economic development.