The Grand Banks of Newfoundland: Atlas of Human Activities

All rights reserved. No part of this information (publication or product) may be reproduced or transmitted in any form or by any means, electronic, mechanical, photocopying, recording or otherwise, or stored in a retrieval system, without prior written permission of the Minister of Public Works and Government Services Canada, 2007, Ottawa, Ontario, Canada K1A 0S5 or at Copyright.Droitdauteur@communication.gc.ca. 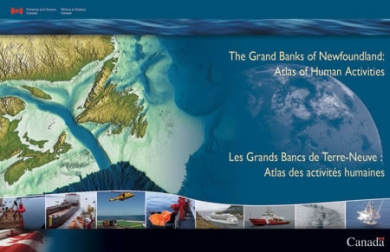 Authors would like to sincerely thank the following individuals who kindly shared their knowledge or provided data on various aspects of the Atlas of Human Activities, as well as those that took part in the review process: Susan Gover, Dave Hawkins and Lewis Manual from the Canada-Newfoundland and Labrador Offshore Petroleum Board; Neil Peet and Brian Stone from the Canadian Coast Guard, Newfoundland and Labrador Region; Kirk Regular from Digeos; Scott Lewis and Rick Wadman from Environment Canada; LCdr R. G. Thwaites and Lt (N) Jay Warwick from National Defence; and Louis Armstrong from Transport Canada.

This atlas was prepared by the Oceans Division of Fisheries and Oceans Canada (DFO), Newfoundland and Labrador Region, to provide oceans planners, managers and users with a visual interpretation on the location and extent of major human activities that occur within the Grand Banks study area (see map entitled, Atlas of Human Activities Study Area). It will serve as a useful tool in the initial planning stages of the offshore component of the Placentia Bay/Grand Banks Large Ocean Management Area (PB/GB LOMA).

Oceans Division began collecting information in fall 2004 on human activities (i.e. fisheries, oil and gas, commercial shipping, etc.), management zones (i.e. NAFO Areas), and ecological features (i.e. bathymetry). In spring 2006 a draft Atlas of Human Activities was prepared, in which various individuals (i.e. individuals that contributed information or have knowledge on a particular activity) had an opportunity to review and comment on the atlas and the data displayed on the maps. This atlas will be a valuable resource for participants in the PB/GB LOMA (i.e. representatives of government departments and agencies, industry groups, non-governmental organizations, municipal governments, etc.), other oceans managers and planners. A similar atlas was published in 2005 entitled, The Scotian Shelf: An Atlas of Human Activities, by Fisheries and Oceans Canada, Maritimes Region.

This atlas was developed to display maps of recent activities, such as fisheries, oil and gas and commercial shipping within the study area on the Grand Banks. The geographic scope of the project is NAFO Divisions 3LNOP, beginning at the 12 nautical mile territorial sea extending beyond the outer limit of the continental shelf; the southern boundary is defined by 42º N latitude. The study area encompasses an area of 533,300 km2. The scale of the maps in this atlas is 1:4,250,000 and the projection is Latitude/Longitude North American Datum (NAD) 1983.

As the purpose of this atlas is to display recent activities, the Oceans Division collected information available since 2000. It is not the intent of this atlas to compare or portray relationships between recent and historical activities; therefore, minimal historical content is involved. When the data was collected, it was examined to determine which time periods had the most accurate and useful data to use in the project. Much of the information, fisheries for example, is taken from 2000 to 2003 because the data sets are recent and complete. Information on resources such as oil and gas is taken from 2000 up to and including August 2005; with the exception of commercial seismic activity which is taken from 1995 – 1999 because it has passed its privileged date. Other information, such as commercial shipping traffic density and vessel surveillance, only uses data pertaining to one representative year (2000 and 2002 respectively) as this gives an overall snapshot of the activities that occur within the study area. As a caution to atlas users, please note the date printed in the legend as this indicates the date or period in which the data was taken.