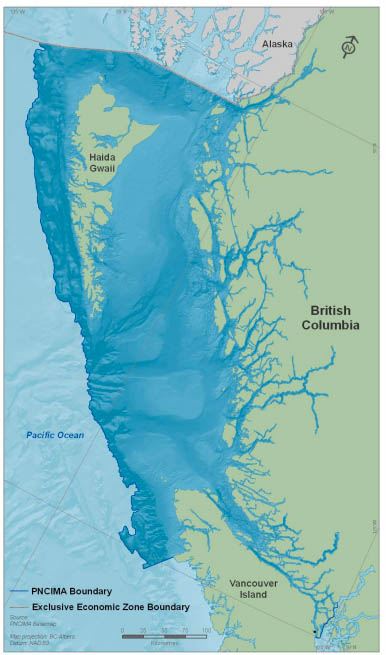 The Pacific North Coast Integrated Management Area (PNCIMA) is one of five priority areas identified for integrated ocean management planning by the Government of Canada and encompasses approximately 102,000 km2. The area extends from the British Columbia-Alaska border south to Bute Inlet on the mainland, across to Campbell River on the east side of Vancouver Island and the Brooks Peninsula on the west side of Vancouver Island and along the edge of the continental shelf.

The Plan provides a joint federal-provincial-First Nation planning framework for conservation and management of human activities on the Pacific North Coast. It is a strategic document that outlines principles, goals, objectives and strategies, and provides the high-level direction on the planning and management of marine activities and resources moving forward. The Plan identifies five priorities for short-term implementation. Of these five priorities, immediate focus will be placed on advancing Marine Protected Area (MPA) Network development and establishing governance arrangements to support Federal, Provincial and Indigenous coordination on the multiple marine activities currently underway and about to be launched on the Pacific Coast, including actions under Canada’s Oceans Protection Plan. MPA Network development will support Canada’s commitment to protect 10% of marine and coastal areas by 2020 in addition to longer team marine conservation goals.

The Plan was developed with federal, provincial, First Nations and local governments and included broad consultation with marine and fishing industry representatives, Indigenous groups and communities. Endorsement of the Plan demonstrates the Government of Canada’s commitment to collaborative oceans management in partnership with provinces, territories, Indigenous Peoples and other stakeholders.