We have archived this page and will not be updating it.

You can use it for research or reference.

We have archived this page and will not be updating it.

You can use it for research or reference.

The goal of the Project is to evaluate the commercial viability of RAS as an alternative to raising Atlantic Salmon to table-size in net-pens. The first smolts will enter the facility in January 2013. The first harvest is planned for early 2014. This project will enable production costs and biological and technical assumptions to be confirmed. The data collected will enable the optimal design and construction of a full-scale (5-module) commercial facility.

Module One will grow-out three cohorts of salmon from smolts (100 g) to market-size salmon (5-6 kg) in commercial scale densities (50 kg/m3); producing a total of 470 MT of salmon annually. Grow-out trials for this pilot project will continue through 2014.

Genetic tools for development of northern Chinook Salmon in culture

Individual year classes of domesticated Yukon fish had reduced genetic diversity but a high level of diversity in founder males indicated that the diversity loss occurred during domestication not as a ‘founder effect.’

We identified eight polymorphic microsatellite markers to enable cost-effective kinship analysis in northern BC and Yukon Chinook Salmon strains. Analysis of the Creative Salmon Yukon strain indicated that although individual year classes had low diversity, the combined live broodstock (all year classes) and domesticated frozen milt inventory was as diverse as other domesticated strains. A sufficient genetic base exists for an effective pedigreed selective breeding program to improve the Creative Salmon Yukon strain.

Reduction of ammonia and solids from Chinook Salmon culture facilities

Metabolic processes in farmed fish, as with all animals, produce wastes. Some of these are nitrogenous, principally ammonia, and they are released into the environment. Increases in nitrogen can occur with a decrease in the efficiency with which feed is utilized by the fish for growth and maintenance. The release of nitrogenous wastes into the environment can have implications for both the ecosystem and for the fish farming facility from which it is being released. Excess nitrogen release represents a potential economic loss in that it is an indication that feed is not being fully utilized by the cultured fish. The excess release can also result in regulatory consequences for culture facilities. Regulators and industry alike are looking for best practices to help reduce the greater levels of these compounds that can be found near farm sites.

This project will explore how feed regimes designed to stimulate compensatory growth* may be used to reduce nitrogen excretion into the environment during Chinook Salmon production. Adequately exploiting compensatory growth using alternating periods of feed deprivation and re-feeding has the potential to reduce the excretion of nitrogenous wastes from the fish in culture facilities into the environment while increasing better feed utilization by the cultured fish.

*Compensatory growth is the increase in growth that occurs when an animal is fed at normal levels following a period of environmentally-induced slow growth (from feed deprivation, low temperature, exposure to light or photoperiod, etc.). The physiological causes underlying compensatory growth in salmon are not fully understood.

The Newfoundland salmonid aquaculture sector, including Northern Harvest Sea Farms NL Ltd., is reliant upon smolt importations. This negatively impacts competitiveness of Newfoundland-based farms and poses a biosecurity risk by requiring farms to often take delivery of smolt at sub-optimal sizes and times of the year due to the constraints imposed by the logistics of long-distance fish transport.

The project consists of the development of a land-based recirculation technology-based hatchery and broodstock facility with full control of production parameters, temperatures and water chemistry.

The proposed effluent handling system and the structure of the site will be different from current recirculation systems by having ground water used in the recirculation systems returned to ground by first separating the waste products from the discharge. The use of denitrification systems will reduce volumes of discharge water requiring treatment, reduce the amount of organics needed to be filtered out stored and disposed of, and reduce energy requirements through reduced heating. While denitrification systems are in use in aquaculture, they are not used for smolt production and not in North America for this purpose. This approach should materially reduce the environmental footprint of the facility. 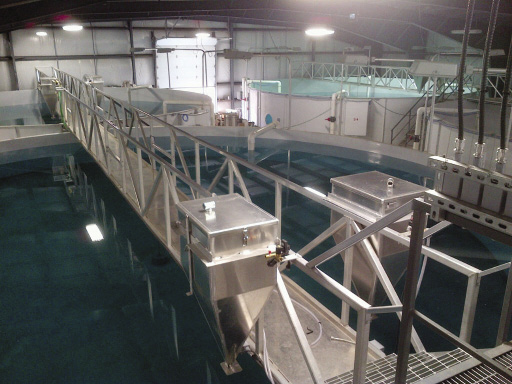 Effects of inshore and within-cage hypoxia on Atlantic Salmon

The goal of this project was to determine how reduced oxygen (natural and culture-induced inshore hypoxia) affects Atlantic Salmon growth and immune system function.

The objectives required to achieve this goal were:

To grow Atlantic Salmon post-smolts and older pre-market salmon in the laboratory under reduced oxygen conditions to quantify the effects of hypoxia on growth and metabolic systems (incl. protein and lipid production and quality) over 90 days, simulating farming conditions by controlling for all remaining environmental parameters, stock density and stress.

The Atlantic Salmon performance selection and broodstock development program is a multi-element, science/industry collaboration whose general objectives are: 1) to examine genetic variability of traits chosen by industry that will improve commercial viability; 2) to select individuals displaying improvement in those traits; and, 3) to establish a pedigreed line of Atlantic Salmon specifically selected for farming within commercial conditions employed by three Atlantic Canadian fish farming companies (Northern Harvest Sea Farms, Gray Aqua Farms, and Admiral Fish Farms). Genetic variation and heritability for bacterial kidney disease, sea lice, growth, fillet yield and deformities will be studied. This will be completed by: tagging individual fish and conducting challenges; tagging individual fish to create two breeding nuclei that will result in the future broodstock for industry partners; and communal rearing of families in commercial sea cages on farms in New Brunswick and Newfoundland & Labrador for harvest assessment of growth, fillet yield, and incidence of deformities (fish will be assigned parentage by using molecular markers). This program will further increase the potential for traceability by allowing identification of salmon from ‘egg to plate’. To date, families have been created for the first two year classes, salmon progeny have been PIT tagged, the initial sea lice challenge completed, the BKD challenge is underway, and various data points have been recorded on each fish over time.

There is a general need for the reproductive confinement of aquaculture populations in order to prevent gene flow to wild populations, undesirable colonization of new habitats, loss of energy to gonad development, and protection of intellectual property and proprietary genetics. Reproductive confinement is also a prerequisite for the application of genetic improvement by transgenesis to aquaculture species. Induction of triploidy (addition of one extra set of chromosomes) has been evaluated as a promising approach to sterility, particularly in salmonids. However, the performance of triploids is generally thought to be inferior to that of diploids, their production is labour intensive, and current procedures cannot guarantee 100% of triploidy. Thus, improvements are needed to fully realize the economic potential of sterility relating to the culture of Atlantic Salmon. The ultimate goal of this project is to generate technology, using traditional and genetic selection techniques, which will facilitate the culture of reproductively sterile Atlantic Salmon with performance equivalent to, or better than, the fertile diploid strains currently used. The results of this project will have application to the reproductive confinement of commercial lines of salmon and rapid-growth AquAdvantage transgenic salmon, and will also inform approaches to reproductive confinement of finfish in general. 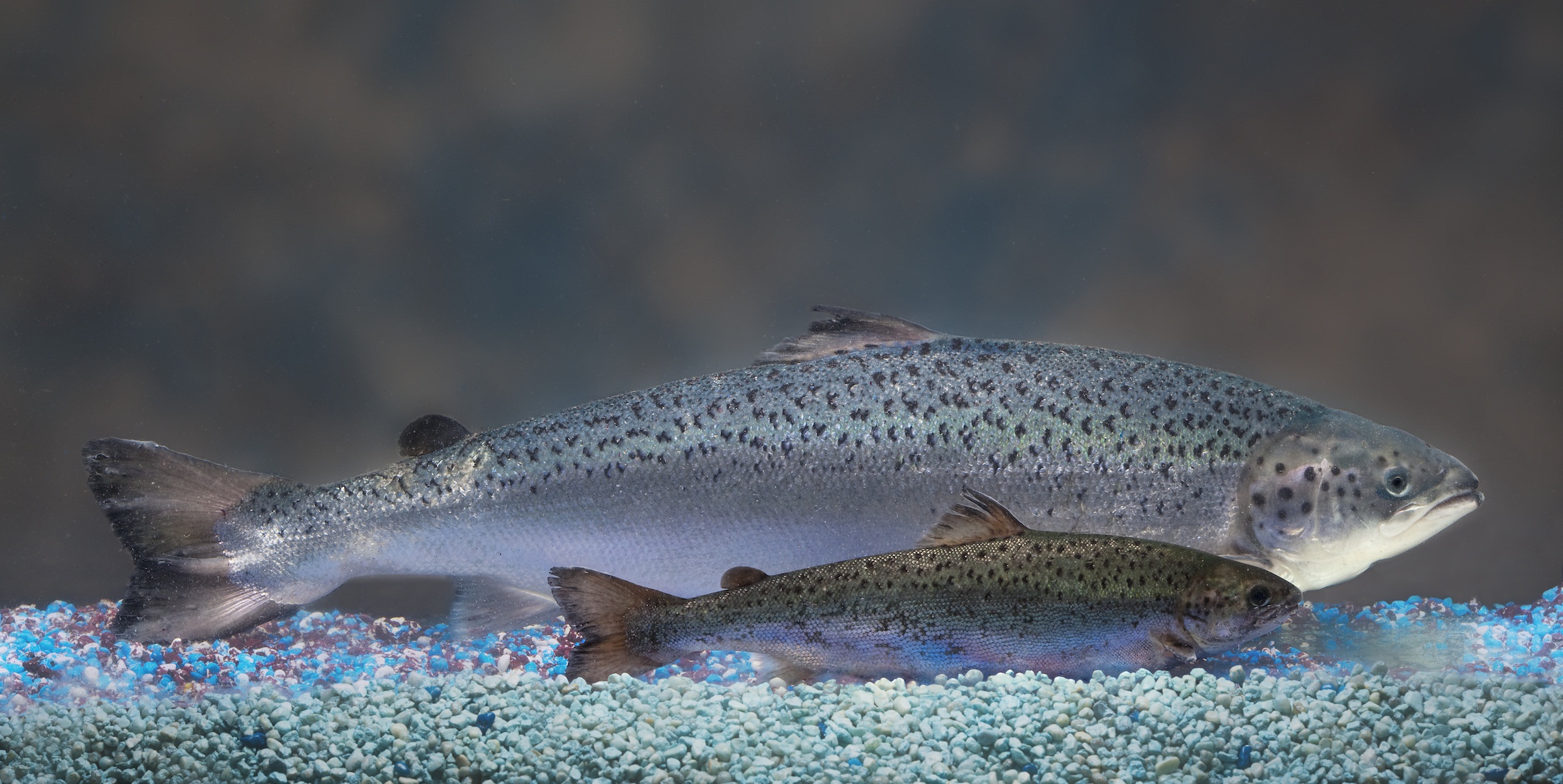 Comparison of saltwater rearing with standard freshwater methods for salmon

This project will evaluate the effect of different smolt-to-adult rearing environments on the physiology and behaviour of adult salmon. Specifically, salmon caught as out-migrating smolt in Fundy National Park, and then reared in a traditional freshwater hatchery environment (Mactaquac Biodiversity Facility) to adulthood, will be compared with juvenile salmon of the same origin reared for the same duration in saltwater facilities (marine net pens). Following rearing in these two different environments, a suite of biological characteristics relevant to the survival and breeding success of Atlantic Salmon in the wild will be measured and analyzed. This information will help inform managers on the advantages and disadvantages of different rearing strategies for inner Bay of Fundy Atlantic Salmon.

Recently, reports have suggested that poor returns of salmon in BC are caused by infections of juvenile salmon with sea lice and other pathogens acquired from salmon farms. There are few data that allow us to understand how and when sea lice infections develop on juvenile salmonids following entry into sea water. In addition, there have been no systematic studies of the overall health of juvenile salmon during their early seawater residency. Without this information it is impossible to predict what, if any, role salmon farms play as a source of sea lice or other pathogens for infection of juvenile wild fish. This project builds upon ongoing collaborative programs between DFO, the aquaculture industry, and the Pacific Salmon Foundation, which are studying several aspects of juvenile salmon health in BC. The overall goals of these programs are to provide the background data necessary to asses what role, if any, salmon farms play as a source of pathogens for wild juvenile salmon. Within the Strait of Georgia and Johnstone Strait, development of sea lice infections on juvenile Pink Salmon, Chum Salmon, and non-salmonid hosts, will be investigated and characterized, yearly for a period of 3 years starting in 2010. Levels of sea lice will be monitored from early seawater entry until the time that the fish enter Queen Charlotte Sound. For Muchalat and Esperanza Inlets increased sampling effort during sea lice surveys will obtain samples of Chum Salmon suitable for histological and microbiological analysis starting in 2011.