The Greenland shark is a large coldwater shark often found at great depths. The teeth on the upper jaw are narrow, pointed, smooth edged and not particularly large, while the teeth on the lower jaw are larger and broader with strongly oblique cusps. The colouration varies slightly; adults can be brown, black, purplish gray or slate gray, while the sides may have a purple tinge, or may have dark bands or white spots. The eye on this shark is small, and there is a spiracle above and behind it. Both dorsal fins are small and of equal size and the caudal fin is asymmetrical. There is no anal fin.

This shark is mainly a cold water animal. It is present in the North Atlantic Ocean in polar latitudes, but may occasionally be found further south in the Gulf of Maine, or rarely, as far south as the Gulf of Mexico. In the Atlantic it can be found from Baffin Island, in the Gulf of St. Lawrence and along the Scotian Shelf. It has sometimes been caught near the mouths of rivers (Saguenay river in Quebec). It is often caught by Canadian fishermen fishing for halibut and other deep-water species.

This shark species inhabits arctic and subarctic waters where the water temperature is between -2 and 7 degrees Celsius. It is the only species found regularly in these cold waters. It is a deep dwelling shark commonly found at depths greater than 200 meters, except when it comes to the surface during the cooler winter months. During the summer the Greenland shark inhabits depths of 180 to 730 meters (600 to 2400 feet). In the winter, it can be found near the surface and near the edge of ice flows.

The largest recorded specimen of this species was 6.4 meters (21 feet) and weighed 1,022 kg (2,250 lbs). However the average size range for adults is usually between 3.5 and 5 meters (11 to 16 feet). This shark is an extremely slow growing animal. Tagging studies have suggested that some of the adults may grow at a rate of only 1 cm (0.4 inches) per year. One Greenland shark captured 16 years after tagging grew from 262 cm to 270 cm. There is no reliable data on their lifespan. Although it feeds upon many fast-swimming fish, it seems to be a relatively sluggish shark, and may capture prey as an ambush predator.

The Greenland shark consumes capelin, char, halibut, herring, lumpfish and salmon among other fishes. It also feeds upon marine mammals such as seals, sea lions and cetaceans.

The Greenland shark is ovoviviparous and can have litters of up to 10 pups. The young are born at a size of 38 cm (15 in). It is unclear at what size males and females become mature. One female 285 cm long which was examined in Nova Scotia was immature.

There is no longer a directed fishery for this shark, although it was fished historically for its liver oil in Norway, Iceland and Greenland. The meat is poisonous when fresh and has to be boiled several times or dried before it can be consumed. It has been noted that this species often gathered in large numbers around whaling and sealing stations to feed on carrion. It is considered to be potentially dangerous due to its size. 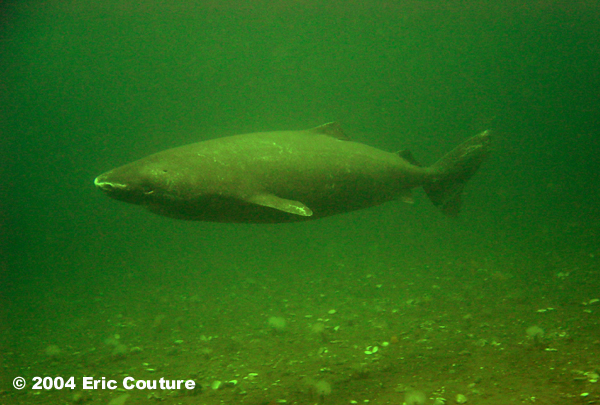