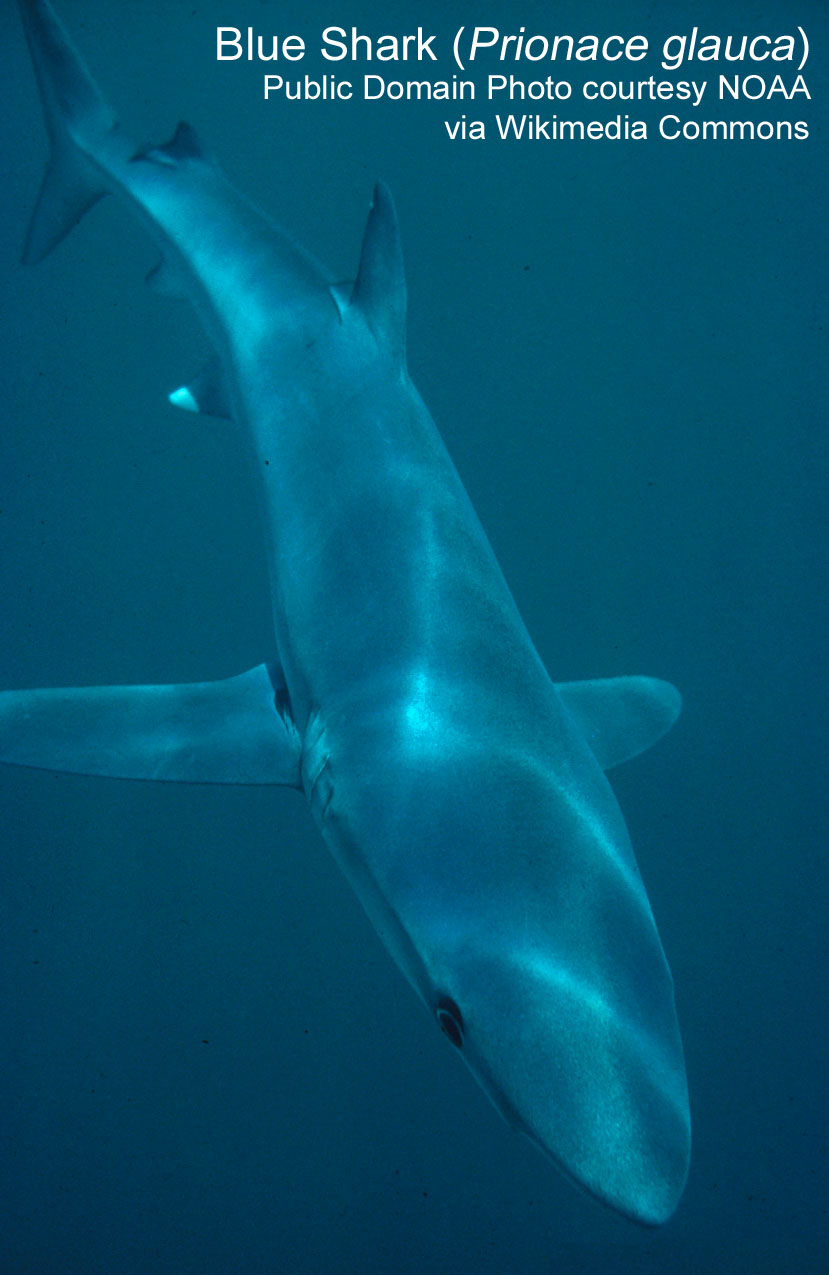 The blue shark is one of the most easily recognized sharks. It has a distinct colouration, a deep indigo blue from above and a vibrant blue on its sides, changing to white underneath. The large pectoral fins are also easy to spot as they are as long as the distance between the tip of the snout to the last gill slit. The blue shark is a long slender shark, reaching 3.8 meters (13 feet) in length. It is likely the most prolific of the large shark species as it is abundant throughout its range. The blue shark has a weak keel on the caudal peduncle and the upper lobe of the caudal fin is larger than the lower. The teeth on both the lower and upper jaw have triangular cusps with smooth or finely serrated edges.

Blue sharks are recognizable for their exceptionally slender body and bright blue coloration. They are dark blue on the back, bright blue on the sides, and white on the underside. The colour quickly changes to a uniform dark grey if the shark is removed from the water. They have a long snout, large eyes, and narrow pointed pectoral fins. Adults range in size from about 2 – 3 m (6 – 10 feet). Blue sharks feed primarily on squid and pelagic schooling fishes such as herring, as well as on carcasses of whales and turtles. Blue sharks are equipped with gill rakers, generally characteristic of filter-feeding sharks, which allow them to feed on smaller pelagic invertebrates such as shrimp.

On the Pacific coast of Canada, researchers from the Pacific Biological Station have recently participated in an international tagging program for blue sharks with scientists from the United States National Marine Fisheries Service (NMFS).

The blue shark occurs in the Atlantic, Pacific and Indian Oceans in both inshore and offshore waters. This wide ranging species is found from 50º N latitude to 50ºS latitude. In the western Atlantic it can be found from Newfoundland and the Gulf of St. Lawrence to Argentina. In Canadian waters the blue shark has been found in southeastern Newfoundland, the Grand Banks, the Gulf of St. Lawrence, the Scotian Shelf and the Bay of Fundy. It is probably the most common large shark seen in Canadian waters.

Blue sharks are a wide ranging species, distributed globally in both temperate and tropical waters. They are present off both the Pacific and Atlantic coasts of Canada. They are a highly migratory species, and are considered one of the widest ranging sharks. In the summer, as warmer water moves northwards, blue sharks can be found off the west coast of Vancouver Island, Canada, within 40 nautical miles (70 km) of shore.

In temperate waters the blue shark is a wide ranging pelagic species occurring near the surface where water depths are greater than 200 m. It prefers temperatures between 10 and 20 degrees Celsius. Blue sharks are commonly seen near the surface over deep waters off the coast of Nova Scotia and Newfoundland during the summer and fall.

The blue shark can grow to lengths of 383 cm but average size is usually around 180 to 240 cm and 30 to 52 kg in weight. Maximum lifespan is unknown at this time but they are thought to at least live to 20 years of age. Seasonal migrations of blue sharks are typically associated with changes in water temperature. As waters warm, blue sharks migrate northward and inshore with large females preceding smaller males and females. Larger males are found further offshore. The blue shark is highly migratory and has been known to make trans-Atlantic crossings.

The diet of this shark includes many types of fish and squid, and may sometimes eat seals. Although flatfishes make up part of the diet, blue sharks predominantly eat pelagic fishes such as herring, silver hake, white hake, red hake, cod, haddock, pollock, mackerel, butterfish , sea raven, tuna and swordfish. Fish caught on longlines during fishing are often attacked and consumed by blue sharks, who in turn often become ensnared in the fishing gear. They are opportunistic and have been known to feed on dead whales and porpoises as well.

The blue shark is a viviparous species, nourishing the young in the uterus and giving birth to live pups. The new-born pups measure 40 to 51 cm (16 to 20 inches) in length and litters usually consist of between 25 to 50 individuals. Litters of up to 135 pups have been reported. Females reach sexual maturity at a size of 2.2 to 3.2 meters (7 to 11 feet), while for males it is achieved at lengths of 1.8 to 2.8 meters (6 to 9 feet), about 6 years old. After copulation the females may retain and nourish the spermatozoa in the oviducal gland for months or even years while she awaits ovulation. Once the eggs have been fertilized there is a gestation period of between 9 and 12 months.

The blue shark has been the subject of considerable research in our laboratory. This shark is sometimes seen by open water divers and is an active gamefish for recreational fishermen. It is considered a nuisance in the commercial fishery because it has low commercial value and it destroys fishing gear and catches. The blue shark has also been implicated in attacks on victims of air and sea disasters. Once plentiful, they are now fewer in numbers as a result of bycatch and overfishing. Mortality due to discarding from pelagic longlines can be substantial (Campana et al. 2009; Campana et al. 2009c). A recent stock assessment for blue sharks in Canadian waters (CSAS resdocs - 2004/069) is now available. ICCAT (the agency responsible for management of large pelagic fishes in the Atlantic Ocean) has completed a preliminary stock assessment (ICCAT report) for blue sharks in the entire North Atlantic, but the findings were equivocal. COSEWIC reviewed the status of blue shark in Canada in 2006, noting them to be of Special Concern, but otherwise not requiring special protection.

Off the west coast of Canada, there is currently no targeted commercial or sports fishery for blue sharks. They may be caught incidentally in longline or trawl fisheries. Off the east coast of Canada blue sharks are the target of sports fishing, mainly through annual derbies. Worldwide, they are usually caught with pelagic longlines but also by hook and lines, pelagic trawls, and even bottom trawls near coasts. Blue sharks are a very common bycatch in high-seas longline and driftnet fisheries. They are not a very valuable shark, so unreported discard rates are likely high, and generally only the fins are taken. However, there are some countries that readily consume blue sharks such as Spain, Brazil, Italy, and France. Blue sharks are utilized fresh, smoked, and dried salted for human consumption; the hides are used for leather; fins for shark-fin soup base; and also for fishmeal and liver oil.

There are no reliable statistics for the catches (directed or incidental) of blue sharks around the world and this makes difficult to understand the impact of fisheries on the stocks. Catches have been estimated at around six million pieces annually. The high abundance and worldwide distribution of this species offers a relative buffer against extinction. However, some discrete stocks might become threatened in the future if bycatch in high seas fisheries does not come under strict monitoring and control. The IUCN Red List classifies blue shark as a Lower Risk/Near Threatened species at the world level.