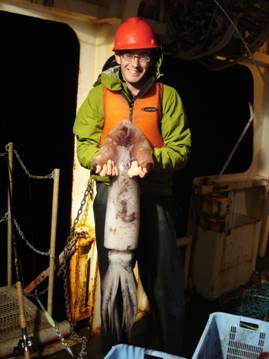 In 2007, DFO committed to develop ecosystem-based approaches to managing human interactions with marine systems. This commitment resulted from Canada’s Oceans Act and recommendations from international bodies such as the Food and Agriculture Organization of the United Nations. To develop such approaches, seven Ecosystem Research Initiatives (ERIs) were established by DFO Science as pilot projects to enhance the capacity to provide scientific advice in support of ecosystem-based management.

The seven initiatives, defined in the Department's Five Year Research Plan are as follows:

Climatic change impacts fish distribution. Due to warming waters along the B.C. coast and in the Strait of Georgia, large numbers of Humboldt Squid have moved north from California waters. Graduate student Kent Tebbut holds one of the large predators captured during a routine DFO survey. Humboldt Squid prey on several of B.C.'s commercial fish species. Photo DFO

Humboldt Squid came to the British Columbia coast in the 2000s, perhaps due to warmer waters or changes in deep water oxygen concentration. They disappeared in 2010 for reasons that are still not clear; although ocean temperatures and oxygen concentrations might have been factors, proof has eluded scientists so far. In general, warming waters due to climate change are expected to impact fish distribution, with potential influence on ecosystems and commercial fish species. Advancing technologies to track ocean climate, which is impacted by prevailing wind events like El Niño/La Niña as well as the Pacific Decadal Oscillation and climate change, is essential to understand long term change. Photo: DFO