APX (Apicomplexan Protozoan Unknown) were observed in the connective tissues of the labial palps and muscular mantle as well as in the gills of geoduck clams. They are oval shaped apicomplexan spores (Nematopsis-like) that resemble gregarine oocysts (Fig. 1). Infected geoduck clams were detected in all Fisheries Management Areas sampled but APX always occurred at very low prevalence and intensity of infection. Also, there was no evidence of associated pathology. 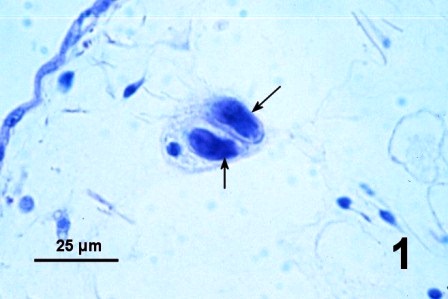 Parasitism by Apicomplexa (gregarines) has been well documented in clams throughout the world. For example, several species of the family Porosporidae (class Conoidasida, order Eugregarinorida, suborder Septatorina) including Nematopsis veneris, Nematopsis ostrearum and Nematopsis schneideri have been reported from various species of clams (Cerastoderma (=Cardium) edule, Cardium lamarcki, Saxicava rugosa, Tellina spp., Venerupis (=Tapes) philippinarum and Protothaca staminea) as well as other marine bivalves including oysters, mussels and scallops. The gymnospores and oocysts (gregarine spores containing one or more uninucleate vermiform sporozoites), or naked sporozoites (depending on the species involved) usually occur within a phagocyte that can move within the connective tissue to most organs but are most frequently observed in the gills. Infection is usually associated with a focal, benign inflammatory response, without significant health effects. These gregarines usually have very limited if any multiplication in bivalves. Multiplication and completion of the life cycle usually occurs in the lumen of the intestinal tract of marine arthropods.

In British Columbia, Apicomplexa are commonly observed in the gills of clams (Venerupis (=Tapes) philippinarum and Protothaca staminea) including geoduck clams and other bivalves but with no evidence of associated disease. To date, the specific identity of the parasites involved and the identity of arthropod hosts remains unknown.