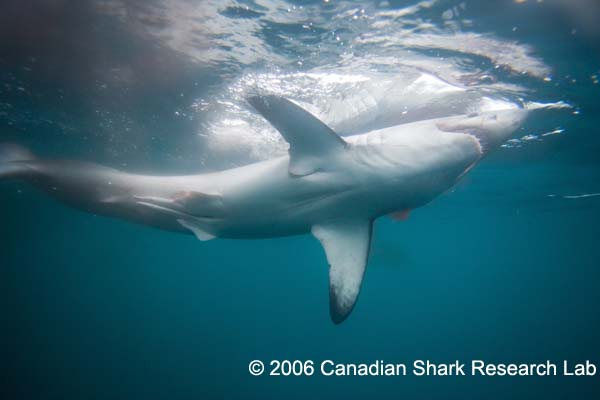 Our laboratory has conducted extensive research on the biology and population dynamics of porbeagle sharks. The support and funding of the Canadian porbeagle shark fishing industry also played a significant role in the success of this research program. Indeed, the support for this program by the Canadian shark fishing industry has been extensive, despite the fact that it was independent of any present or future fishing quotas.

Determination of Age and Growth Rate

Several hundred vertebrae have been sectioned, revealing growth bands or annuli. The recent effort has been to determine if these bands are formed yearly, and can therefore be used to determine growth rate and longevity in support of an age-structured stock assessment. Age validation has proceeded along several fronts: analysis of length frequency data, analysis of tag-recapture data, examination of vertebrae from tag recaptures tagged as young of the year, examination of vertebrae from recaptures tagged with oxytetracycline injections (OTC), and bomb radiocarbon assays. Our results clearly indicate that the vertebrae provide an accurate measure of porbeagle age, at least until age 26. The oldest shark aged so far was 26 years old, and calculations suggest that porbeagle may grow as old as 40 years. This work has been published (Campana et al. 2002; Natanson et al. 2002).

The photos below show some examples of prepared porbeagle vertebrae as seen using the image analysis system. Yearly growth bands appear as paired light and dark bands. Figure 1 shows vertebrae collected from porbeagle tag recaptures tagged as young of the year (YOY). These samples are important as they provide examples of sharks of known age. Growth bands on the vertebral sample in figure 2 indicate a shark of about 15 years of age. This number is not validated but the annuli are presumed to be correctly interpreted based on the similar appearance of annuli in validated vertebrae, such as those in figure 1.

Click on the photos below to see the image full size (Note: these are high resolution images, so the images will take somewhat longer to display).

Below are some images of other known aged and OTC marked porbeagle vertebrae (Note: these are high resolution images, so the images will take somewhat longer to display).

The porbeagle population in the NW Atlantic has been fished for more than 40 years, leaving the size of the current population at about 10% of the level that was present originally. Has this level of fishing affected growth rate and the size/age of sexual maturity? Research has now been completed to answer this question (Cassoff et al. 2007).

We tested for density-dependent changes in growth and maturation of northwest Atlantic porbeagle shark (Lamna nasus) after the population declined by 75-80% from fishing. Vertebrae and reproductive data collected from the virgin (1961-1966) and exploited (1993-2004) populations were analysed in order to test for differences in growth rate and age/length at maturity between the time periods. We detected significant differences between reparameterized von Bertalanffy growth models for each period, using likelihood ratio tests. Beyond an age of 7 years, mean length-at-age was greater during 1993-2004 than during 1961-1966. Between 1961-1963 and 1999-2001, length at maturity decreased in males (from 179 to 174 cm CFL) and was invariant in females (216 cm CFL), while age at maturity declined in both males (from 8 to 7 years) and females (from 19 to 14 years). An analysis of porbeagle temperature associations indicated that sharks occupied comparable temperature conditions during the mid-1960s and 1990s, ruling out the possibility of temperature-induced growth changes. The observed increase in growth rate and decrease in age at maturity following exploitation support the hypothesis of a compensatory density-dependent growth response.

A comparison of porbeagle size and maturity characteristics throughout the world is available in Francis et al. (2008).

Intensive sampling on board commercial fishing vessels was used to document the seasonal and length-based development of all of the reproductive tissues. In addition to measurements of the size of some internal organs (oviduct, shell gland, ovary, uterus, eggs, and embryos in females; claspers, siphon sac, testes, epididymis, ampulla and sperm packets in males) many of the above were also examined histologically. Size and age at sexual maturity were determined for each sex. Initial results indicate that 50% of male porbeagles are mature at a fork length of 174 cm (age 8), while females do not mature until a fork length of 217 cm (age 13). This work has now been published (Jensen et al. 2002).

Click on the images below to compare the internal differences of immature and mature porbeagles (Note: these are high resolution images, so the images will take somewhat longer to display).

Porbeagle in relation to temperature

The fishing industry has kindly made available hundreds of detailed records of fishing location which include both sea surface temperature and temperature profiles. These have been analyzed to determine distribution patterns in relation to water temperature, depth and time of year. Our results indicated that porbeagle are most often caught at depths of 35-100 metres at water temperatures of -2 to 15 deg C. The average temperature at the depth of the fishing gear was consistently 7-8 deg C at all times of the year. Water depth was not associated with catch rate, although porbeagle tended to be in shallower water in the fall than in the spring. Since porbeagle are among the most cold-tolerant of the pelagic shark species, they appear to have evolved to seek out coldwater prey by taking advantage of their thermoregulating capability. This work has been published (Campana and Joyce 2004).

Until recently, the location of the porbeagle pupping ground has been completely unknown. In order to identify the migratory pathways and pupping grounds, a project was initiated in which sexually mature porbeagles were tagged with archival satellite popup tags while on their mating grounds in early fall. In early spring (which is when the females give birth), the popup tags released from the sharks and transmitted their data. The results were startling - all of the mature females migrated south to the Sargasso Sea (between Bermuda and Cuba) to give birth to their pups. The migration required the sharks to traverse the Gulf Stream, whose water temperatures are too warm for the cold-water porbeagle. Therefore, the porbeagles literally dove underneath the Gulf Stream to depths of 1360 metres to avoid the warm water. While in the Sargasso Sea, the porbeagles maintained an average depth of almost half a kilometre, which probably explains why they have remained undetected over the years. This research has been published (Campana et al. 2010).

This information will allow Canada and/or ICCAT to decide if international fisheries management and/or designation of protected pupping areas is required.

Commercial catch rates, length frequencies, tag recaptures and estimates of the age composition of the population have been integrated and used to reconstruct a perspective on the population dynamics and sustainable harvesting level of porbeagle off the eastern coast of Canada. A first product of this investigation was a detailed stock assessment for porbeagle tabled late in 1999. An updated and improved stock assessment was tabled in the spring of 2001, and was used as the basis for a new management plan. An overview of some of the results has been published (Campana et al. 2002; Campana et al. 2008).

In 2004, by the Committee on the Status of Endangered Wildlife in Canada (COSEWIC) recommended that porbeagle sharks be designated as Endangered, based on the stock information summarized in Campana et al. (2003) (CSAS resdocs - 2003/007). If listed as an endangered species, all commercial fishing for porbeagle would be prohibited. The Canadian government decided against listing porbeagle under the Species At Risk Act (SARA), due to rigorous conservation measures in the new shark management plan.

To update and improve the available information on porbeagle, a comprehensive stock assessment was carried out in 2005, concluding that the 2005 female spawner abundance was about 12% to 15% of its 1961 level, although population numbers had remained relatively stable since the reduction of catch quotas in 2002 (Stock Assessment Report 2005). All analyses indicated that the population could recover, but that human-induced mortality needed to be kept below about 4% of vulnerable biomass (about 185 t per year) (Recovery Assessment Report 2005). The most recent stock assessment indicates that population recovery has already begun (Stock Assessment 2010) (Stock Assessment 2012).

As part of the detailed sampling being carried out on board commercial vessels, stomach contents of 1022 porbeagles have been examined and weighed to determine the diet of these large predators.

Our results indicate that the porbeagle shark is an active and opportunistic predator feeding on a diverse group of fish and invertebrates throughout the water column. For the first half of the year the porbeagle's diet consists mainly of pelagic fish (especially mackerel, herring, longnose lancetfish) and squid. Cod, flounder, lumpfish and other groundfish are commonly seen in stomachs taken in the fall, when many porbeagle are in shallower water. Other examples of less common prey include wolffish, spiny dogfish, sandlance, redfish, small crabs and the odd shellfish or gastropod. Overall, 91% of the weight of the stomach contents was fish. As well as living organisms, porbeagles have been known to take small bits of garbage and debris floating in the water column. Pieces of fishing line and rope, shiny packaging, wrappers, and plastic have all been found in their stomach contents. This work has now been published (Joyce et al. 2002).

Click on the photos below to see some examples of common and less common prey (Note: these are high resolution images, so the images will take somewhat longer to display).

The 2005 Recovery Potential Assessment (RPA) for porbeagle shark stated that a shark-directed survey would be required if the directed fishery for porbeagle was to be resumed. The primary objective of a time series of shark surveys would be to monitor the status of the porbeagle population in response to recovery efforts, by providing a fishery-independent estimate of relative abundance and size composition. Survey estimates of abundance would be free of the constraints of using commercial catch rate as an index of abundance during periods of a spatially-contracted fishery, such as was documented in the fishery after 2000. Since the detailed population model described in the RPA provides an estimate of population abundance to 2005, a shark survey conducted in 2006 or 2007 could be calibrated against the most recent abundance estimate from the population model. Once that relationship is defined, subsequent surveys would be used to monitor changes in porbeagle population abundance, and thus track the population recovery. A secondary objective of the survey would be to monitor the population abundance and size composition of other shark populations, particularly blue shark and mako.

A dedicated shark survey using shark longline gear would have to be conducted each year for at least 2 years to provide a reasonable estimate of shark distribution and abundance. Subsequent surveys could be conducted at broader intervals, if desired. Longline gear would be fished throughout the water column, from surface to bottom and back to surface. The survey area would consist of about 50 stations distributed in a grid pattern across the Scotian Shelf, in the Gulf of St. Lawrence and off of southern Newfoundland.

The first shark survey was completed in June 2007, and the second survey was completed in July 2009. The array of survey stations is shown below. The results indicated that the relative abundance in the two surveys was very similar, as was predicted by the population model. The shark survey may be repeated again in the future to confirm that population recovery is continuing.