In April 2006, the Committee on the Status of Endangered Wildlife in Canada designated the American eel as Special Concern (Reassessment planned for April 2012).

This species has been identified as Special Concern by the Committee on the Status of Endangered Wildlife in Canada. It is currently being considered for listing under the federal Species at Risk Act.

The American eel (Anguilla rostrata) belongs to the family Anguillidae. At different life phases it is referred to as glass, yellow or silver eel. It has the following characteristics: 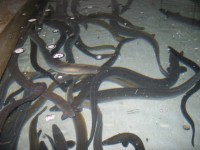 The perception of eels varies widely across cultures and countries. For some, eels are considered sacred, while others consider them unappealing. Some may use eels for food or ceremonial purposes, while others may fish them for sale. The American Eel has a significant value for Aboriginal people, as the eel is considered a spiritual being and is still an important food source with medicinal properties; mainly with the characteristics of its skin, which is used to wrap sprains and provide relief from cramps and other ailments. For the Mi'kmaq of Newfoundland, the eel represents an important food source that could be procured in both winter and summer.

American Eels have a fascinating and complicated life cycle. American eels spawn only once during their life span, and the entire population spawns together in the Sargasso Sea located south of Bermuda. The leaf-shaped eel larvae (called leptocephali) drift on North Atlantic currents for up to one year before reaching coastal waters. They then metamorphose into a life stage where they are transparent and are called glass eels. Leaving the open ocean, they enter sheltered salt-water bays, brackish estuaries or freshwater rivers and begin taking on colour. At this life stage, they are called elvers. Once settled into their rearing habitats, fully pigmented elvers become yellow eels. When eels prepare for their spawning migration, they metamorphose into silver eels.

American eels tolerate a wide range of temperatures and salinities, and can reside in a variety of habitats including the open ocean, brackish estuaries, and freshwater rivers and lakes. Their range extends from Greenland to northern South America. American eels are opportunistic feeders, and their diet includes aquatic insects, fish, crustaceans and worms depending on their habitat. At the silver eel stage, they no longer have functional digestive systems and do not eat.

Male and female American eels differ in their size, life expectancy and distribution. Male eels are more common in the southern half of the habitat range and are found primarily in rivers and estuarine habitats. Males mature and migrate to the Sargasso Sea at a smaller size (40 centimetres) and at a younger age (5 to10 years). Females are more likely to be found in the northern habitat range in freshwater and brackish water, and can be over 100 centimetres in length and as estimated 20 years older before maturing and migrating to the spawning grounds. The oldest recorded American eel was a captive eel which lived to be 88 years old.

The American eel has only one single breeding population. If they are declining in one area, even if declines are not evident elsewhere, the population overall will be in decline. It is of concern that the recruitment of eels in the Upper St. Lawrence River and Great Lakes in Canada has declined by over 99 percent.

Scientists suspect the largest threats to the American eel relate to habitat quality, fishing and obstacles to their migration. This includes changes made by humans to their habitats, dams, over fishing, changes in ocean conditions, as well as acid rain and contaminants. Still, much needs to be learned about this species to help reverse the effects of such threats.

The decline of the American eel population may affect a variety of birds, fishes and mammals, as it plays an important role in Canada’s aquatic biodiversity and our culture.

For more information, visit the Species at Risk Act registry website and the Fisheries and Oceans Canada Aquatic Species at Risk website, email the department at info@dfo-mpo.gc.ca, or call 1-866-266-6603.