The Beluga Whale: A species in need of your help in Newfoundland and Labrador

The Beluga Whale: A species in need of your help in Newfoundland and Labrador (PDF, 595 KB)

All of the beluga whale populations have been assessed by the Committee on the Status of Endangered Wildlife in Canada (COSEWIC) as Threatened, Endangered or Special Concern. The St. Lawrence River beluga Whale population has also been listed as Threatened under Schedule 1 of the national Species at Risk Act (SARA) and other populations are under consideration for listing.

Regulations respecting the beluga whales can be found in the federal Marine Mammal Regulations made pursuant to the Fisheries Act. Aside from the already-listed St. Lawrence population, if other populations of the beluga whale are listed under SARA, they will be given additional protection. Under SARA, recovery strategies followed by action plans are required for species listed as extirpated, endangered and threatened, and management plans are required for species listed as special concern.

The beluga whale (Delphinapterus leucas) is a toothed whale and belongs to the family Monodontidae. It derives its name from the Russian word “blukha” which means “white.” This whale is also known as the “white whale” in English, “qilalgaq” in Inuktitut, Invuialuktan and Inuinactun dialects and “siqsuaq” in the Inupiat dialect.

Belugas have the following characteristics and distinguishing features:

Beluga whales have a circumpolar distribution and are found in the Arctic as far as 82°N latitude, in the Pacific sub-Arctic south to 60°N (Alaska) and in the St. Lawrence Estuary as far south as 47°N latitude. A total of 22 populations have recently been identified, seven of which are present in Canadian waters during at least part of the year.

Beluga whales have been sighted in the waters around Newfoundland and Labrador; these sightings have usually been lone animals (often juveniles), but also rarely groups of hundreds. Genetics testing for some of these beluga whales have shown them to belong to several populations; although to date none have been from the nearby Gulf of St. Lawrence population. 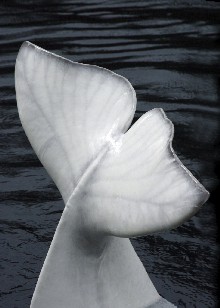 The beluga whale frequents different habitats depending on the season and progression of ice breakup and freeze. Typically, in the late spring, they congregate along ice edges, penetrate leads and may appear in river estuaries. During the summer, they are found along the coastline and in shallow waters. They also frequent specific river estuaries, which may serve as molting sites or as shelter from predators such as killer whales. In late summer or early fall, they leave the estuarine areas for deeper waters, possibly to feed intensively. From there, beluga whales migrate to offshore winter areas, sometimes over long distances. In late winter to early spring, mating occurs, although very little is known about the breeding behaviour of beluga whales. Females become sexually mature between six and seven years. Gestation takes about 13 to 14.5 months. The lactation period is estimated to be 20 to 32 months. The lifespan of the beluga whale can reach 35 to 40 years.

Beluga whales are vulnerable to predation by polar bears (Ursus maritimus) when they are near ice and killer whales (Orcinus orca). Their propensity to return to the same estuaries year after year makes them vulnerable to human hunting, disturbance and pollution from agricultural and industrial runoff. Other threats or potential threats that may affect beluga whales include noise and disturbance resulting from increased vessel traffic and competition with commercial fisheries.

“no person shall kill, harm, harass, capture or take an individual of a wildlife species that is listed as an extirpated species, an endangered species or a threatened species.”

For more information about aquatic species at risk: 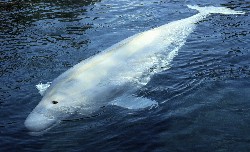