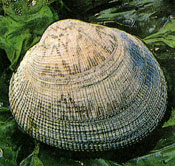 Littleneck clams (Protothaca staminea) range from the Aleutian Islands to Baja California, though they are only abundant north of Oregon. Commonly found in bays and estuaries along the coast of British Columbia, littleneck clams live at low- to mid-intertidal depths, burrowing up to 15 centimetres into the beach. Although occasionally recorded to 10 metres depth, there are no significant subtidal populations of littleneck clams in B.C.

Littleneck clams are round in profile, with concentric rings (which can be used to determine age) and radial ribs on the surface of the shell. Their colouration varies from white, off-white or cream, mottled with brown, to grey. Littleneck clams have separate sexes and a re broadcast spawners. Littleneck clams grow to a maximum size of 70 millimetres shell length and live to a maximum age of approximately 14 years.

Littleneck clams have separate sexes. They mature at between 22 and 35 mm in length, or approximately 2 to 3 years of age. In B.C., they spawn from April to October. Larvae are planktonic for 3 to 4 weeks before settling in suitable habitat. Adult populations, once settled on one beach, cannot move to another. Although there may be some movement of clams on a beach, distinct growth rates on upper and lower portions of a beach indicate that these movements are relatively limited.

Age is estimated from counts of annual rings on the shell surface. Maximum age in B.C. is 14 years. Growth varies considerably from beach to beach, and between tide levels on a given beach. Growth is rapid to five years of age, and then slows. Littleneck clams can reach legal size (38 mm) in the Strait of Georgia in 3 years. Maximum size (70 mm) is reached in 10 years. 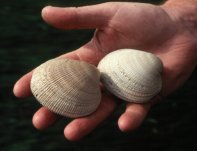 Clam harvesters fish during low tides, using rakes or scrapers to turn littleneck clams out of the substrate and collect them by hand.

Intertidal clam landings have been recorded since the turn of the century, and clams such as the native littleneck were important to First Nations people long before contact. The littleneck clam resource currently supports commercial, depuration and recreational harvests, and First Nations food and ceremonial requirements. These fisheries also exploit stocks of Manila clams (Venerupis philippinarum) and to a lesser extent, butter clams (Saxidomus gigantea).