Manila clams are native to Japan, accidentally introduced to Canadian waters during the 1920s or 1930s. They now range from the central coast of British Columbia (particularly beaches in the bays and estuaries in Georgia Strait and the west coast of Vancouver Island) to California. They make shallow burrows in the sand, gravel or mud in the mid-intertidal zone. However, because they do not migrate after they have settled in a beach and they do not burrow deeply, they can experience increased mortality during the winter when they are exposed to frost and cold winds.

Manila clams (Venerupis philippinarum) are oval in profile, narrower at the anterior end. Colouration ranges from off-white to yellow, brown or grey; they often display strips of red, blue or black when small. The inside of the shells is white or yellow with a purple stain on the posterior margin. They have concentric rings (which can be used to determine age) and radial lines on the surface of the shells. Manila clams have separate sexes, and are broadcast spawners. They can grow to 75 centimetres and live up to 14 years.

Manila clams were introduced in BC during the 1930s in oyster seed from Japan. They quickly spread throughout the Strait of Georgia and were accidentally introduced on the west coast of Vancouver Island. Manila clams that exist around Bella Bella are believed to have been carried into the area as pelagic larvae from Quatsino Sound.

Manila clams are found from the central coast of BC to California. They are found in the upper half of the intertidal zone in BC in mixed substrates of mud, sand and gravel. These clams live in shallow transitory burrows in the substrate. No significant subtidal populations of Manila clams have been found in BC.

Manila clams have separate sexes and are broadcast spawners, synchronously releasing gametes into the water column, where fertilization occurs. Maturation occurs between 20-25 mm in length, or approximately 1-3 years of age and spawning occurs from June to September in the Strait of Georgia. Temperatures of 12-13°C are required for gonadal development, and temperatures of 15°C are required for spawning.

Fecundity increases with size, with estimates ranging from 188,000 eggs/female at first maturity to 2,350,000 eggs/female at 40 mm TL (Total Length). Larvae are planktonic for 3 or 4 weeks before settling in suitable habitat. Adult populations are closed: once settled on one beach, these clams cannot move to another.

Although there may be some movement of Manilas on a beach, distinct growth rates on upper and lower portions of a beach indicate that these movements are relatively limited. Recruitment, the introduction of adults into a population, is highly variable due primarily to environmental conditions. Recruitment is sporadic in the Central Coast.

Interpretation and counts of annual rings on the shell surface are used to estimate age. Maximum size of 75 mm TL (Total Length) is achieved after 8-10 years, and maximum age in B.C. is 16 years. Age at recruitment to legal size (38 mm TL) varies from beach to beach and between areas on a single beach. Growth is greatly affected by tidal elevation and substrate characteristics, and growth can vary as much between different areas of the same beach as between different beaches. Under optimal conditions, Manila clams can reach legal size (38 mm total length) in approximately 3-4 years in the Georgia Strait, 4 years on the west coast of Vancouver Island, and 3-4.5 years in the Central Coast.

Manila clams are filter feeders, and thus can accumulate fecal contaminants (bacteria and viruses that can cause disease) which originate in fecal materials from human, wildlife or agricultural sources. Water quality in shellfish growing areas is monitored by Environment Canada, and beaches suffering elevated levels of fecal contamination are restricted from both commercial and recreational harvests. 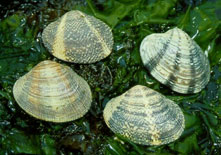 Commercial clam landings since the 1950's were dominated by butter clams until a shift in market preference in the 1980's increased demand for steamer clams (Manila and native littleneck clams). The market shift was primarily driven by demand for Manila clams, which are an attractive clam that separates easily from the shell after cooking. Most Manila clams are sold as live product to restaurants in the States.

Clam harvesters fish during low tides, using rakes or scrapers to turn Manila clams out of the substrate and collect them by hand.Landings of Manila clams are primarily from the South Coast of British Columbia, because there are few Manila populations in the North Coast and water quality monitoring programs were discontinued in most northern areas in the 1960's.

Landings of Manila clams and mixed steamers (which are presumed to be primarily Manila clams) increased dramatically in the early 1980's, averaging 1,654 t between 1980 and 2000, as opposed to 189 t from 1951 to 1979. Manila clam landings decreased after 1988, primarily as a result of more restrictive management measures. In recent years, openings have been reduced in most areas to only a few days per year. Regardless of reduced opportunity, landings increased to 1,327 t in 1994, and have fluctuated between approximately 1,100 and 1,500 t since then. However, these statistics include depuration landings since 1994, representing the revival of operations on some beaches that had been lost to contamination, and landings from the Central Coast since 1992.

Licensed commercial clam diggers are required to designate one of six clam areas they wish to fish each year and then compete for available clams during short intense openings. In 1998, the intertidal clam fishery underwent licence limitations, resulting in a reduction from approximately 2,500 licensed diggers in 1988 to 1,160 eligible participants.

Several collaborative pilot projects that provide First Nations with communal commercial harvest opportunities on beaches fronting reserves are underway in the Strait of Georgia and on the west coast of Vancouver Island.

Intertidal clam fisheries have been closed in the north coast region since 1963. These closures are the result of concerns regarding water quality and paralytic shellfish poison (PSP), which, in the absence of monitoring programs, create potential human health risks. A pilot commercial communal fishery occurs near Bella Bella, with special water quality and product monitoring programs.

Exploratory surveys in the early 1980's first found Manila clams in the area around Bella Bella, and a pilot communal commercial fishery was established in Area 7 in 1992, with special water and product quality monitoring programs.

The eiltsuk Tribal Council administers 50 Aboriginal Commercial Licences for the Area 7 fishery. The fishery is co-managed by DFO and the Heiltsuk Fisheries Program. The Heiltsuk conduct annual assessment surveys on index beaches in each of the Subareas fished, and Subarea catch ceilings are developed pre-season to insure that fishing effort is not concentrated in a few Subareas close to Waglisla. Logbooks and a dockside validation program track landings in-season.

The Area 7 fishery is conducted in the winter, usually between November and April. Clams are harvested during low tides, using rakes or scrapers to turn Manila clams out of the substrate and collect them by hand. Clams are wet stored on beaches in designated areas, and delivered to Waglisla on pre-determined dates. The clams are purchased and transported to processing facilities in the South Coast.

The fishery was managed under a Total Allowable Catch (TAC) of 113.6 t until 1999, when the TAC was reduced to 68.2 t after a review of the fishery. Littleneck and butter clams, which had also been under 114.1 t TACs, were removed from the commercial fishery due to low interest from the diggers (mainly concerns regarding price) and to set these species aside for food, social and ceremonial use.