Anatomy of the Geoduck Clam

The general anatomy of geoduck clams was established from cultured juveniles and both normal and abnormal wild adults. The cultured geoduck clams (6 - 25 mm in shell length) were collected from ocean nursery sites in Georgia Strait, B.C. Adult clams were gathered from the east and west coast of Vancouver Island and the central coast of British Columbia during the course of the 1997/1998 fishery (supplied by Underwater Harvesters Association and Fan Seafoods).

The shell of Panopea generosa is generally rectangular with a rounded anterior edge. Both valves are equally proportioned and are unable to enclose the muscular mantle and enormous, fused siphon.

The valves are attached to each other dorsally by an elastic hinge ligament. The shell consists of three layers, the periostracum, prismatic, and nacreous layers. The periostracum, a horny organic material (conchiolin), is continuous over the whole surface of the geoduck and forms an acellular layer on the outermost surface of the siphon and muscular mantle. The hinge ligament joins the two valves and is composed of the same material as the periostracum and is continuous with it (Simkiss 1988). The margins of the left and right mantle are fused together to form a muscular organ on the anterior and ventral surfaces (commonly called the belly). The mantle is continuous with the ventral surface of the siphon and extends to the anterior dorsal edges of the valves. The pedal aperture, a dorsi-ventral slit through the muscular mantle is located medially in the anterior surface of the mantle and is a passageway for the foot. This aperture is the only opening from the mantle cavity to the outside, other than the openings through the siphons. The incurrent and excurrent siphons are fused together along their entire length (commonly called the neck). The siphons project from and fill the space between the posterior surface of the valves. 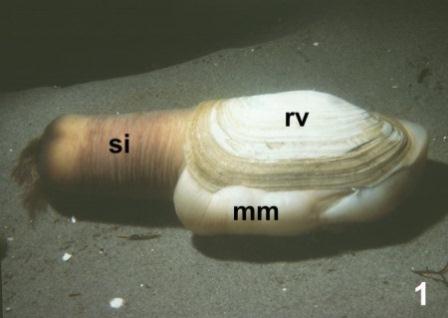 Figure 1. Adult geoduck clam with a valve length of 15.5 cm. The siphon (si), at the posterior end, and the muscular mantle (mm) at the ventral surface could not be contained within the valves (rv – right valve).

Thanks to Rick Harbo for donation of this image. 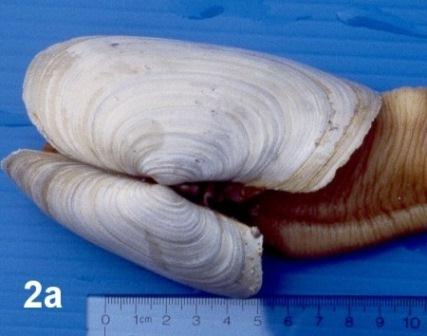 Figure 2a Valves of fresh adult geoduck clams. Illustration of the irregular growth ridges that occur in a direction corresponding to the shell margin. 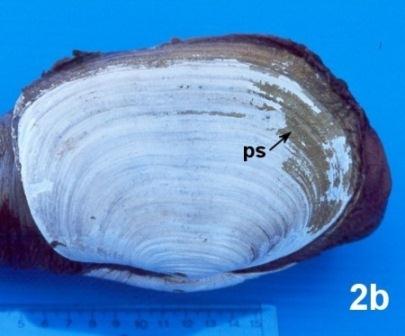 Figure 2b Valves of fresh adult geoduck clams. Patches of tan periostracum (ps) located on the anterior end of the left valve.

The inner surface of the valves (shell) is usually rough with a deeply impressed, continuous pallial line (where the mantle was sealed to the shell) and triangular pallial sinus (Fig. 3). At the dorsal surface, the hinge ligament joins the two valves and each valve has a cardinal tooth at the hinge. 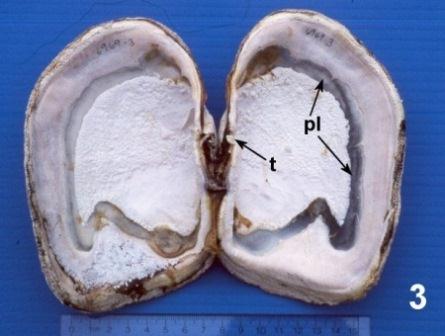 Figure 3 Internal surface of the valves of the geoduck clam showing the pallial line (pl) and a tooth (t). The anterior shell edges are at the top of the image.

The general location of the major organs is depicted in the following drawing.

Figure 4. Sketch of the internal organisation of the major organs of the geoduck clam. The right valve and right side of the muscular mantle and siphon have been dissected away to reveal the fused siphons and the arrangement of the internal organs. The thin mantle (tm) that lines the inner surface of the right valve to the pallial line has been turned over the dorsal edge of the left valve (lv). Other labels on the sketch are: am - anterior adductor muscle, bg - brown gland, cmm- cut surface of muscular mantle, cs - cut surface of siphon, cse - cut surface of septum, emm - external surface of muscular mantle, ex - excurrent channel, f - foot, g - gills, h - heart, ib - infrabranchial chamber, in - incurrent channel, k - kidney, lp - labial palps, lv - left valve, pa - pedal aperture, pm - posterior adductor muscle, sb - suprabranchial chamber, tm - thin mantle, vm - visceral mass.

The siphons are located at the posterior end of the geoduck and in life, the geoduck clam is orientated with the siphons directed towards the surface of the substrate. The siphons are completely fused with an internal septum between the incurrent siphon and the excurrent siphon. The gills extend from the anterior end of the septum over the visceral mass to the labial palps effectively dividing the mantle cavity into suprabranchial and infrabranchial chambers. Water is drawn through the incurrent siphon into the infrabranchial chamber, filtered through the gills into the suprabranchial chamber and is expelled through the excurrent siphon. The apparent double set of gills on each side of the body is actually derived by the folding of a single gill. In addition to the function of gas exchange during respiration, the gills also trap food particles and transport them to the labial palps which lead to the esophagus. The globular visceral mass contains the stomach, style sac, intestine, digestive gland and gonad. The foot extends from the visceral mass through the pedal aperture. Cut surfaces of the anterior and posterior adductor muscles are indicated in Fig. 4 above. The histology of the various organs is described and illustrated by following the links from the histology overview page.