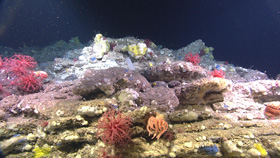 The ecosystem reported on in the Placentia Bay Grand Banks Large Ocean Management Area Report is the designated integrated management area for the Newfoundland and Labrador Region. Geographically, the area encompasses approximately 550,000 km² , starting at Cape Ray on the island portion of the south coast (near Port aux Basques), continuing eastward along the south coast and extending northward along the east coast, as far north as Cape Freels at the tip of Bonavista Bay. The seaward boundaries correspond with the Northwest Atlantic Fisheries Organization's (NAFO) fisheries management divisions 3LNO and subdivisions 3Ps and 3Pn. The southern boundary of the integrated management area extends beyond the 200 nm limit of Canada's exclusive economic zone to the edge of the continental shelf, defined as 42° N latitude.

Several areas for priority conservation action have been identified within the LOMA to date: Atlantic Cod, aquatic invasive species (AIS), habitat and corals and sponges. All three of the Atlantic Cod (Gadus morhua) stocks within the LOMA declined significantly in the late 1980s and early 1990s.

The green crab threatens to displace native species in the area. Photo: DFO

The aquatic invasive species, Green crab (Carcinus maenas), was first observed in Placentia Bay in 2007, and in areas of high abundance have had a substantial impact on commercial and non-commercial mollusc and crustacean species and the natural environment. Mitigation by removal through intense trapping can be an effective method of reducing the abundance of green crab and limiting the impact the species has on the environment while other methods continue to be researched and tested.

The identification of ecologically significant species that provide structural habitats (e.g., corals and eelgrass), areas considered ecologically and biologically significant, as well as habitat characterization remain a priority to enhancing knowledge and protection of areas within the LOMA that are important to the ecosystem structure and function. 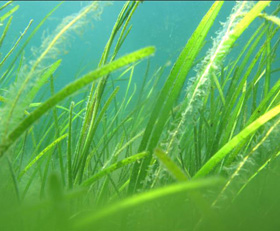 Deep-sea corals have been identified as ecologically significant species within LOMA ecosystems as they provide unique structural habitat. At the same time, cold water sponges are increasingly being recognized as similarly important components of marine ecosystems through their provision of benthic habitat. Priority research areas for deep-sea corals based on areas of high biodiversity and abundance have been identified in the region and management measures targeting their protection are ongoing.

In regards to new sources of information addressing knowledge gaps within the Large Ocean Management Area, a 2007 aerial survey was conducted to accurately estimate the abundance and distribution of marine mammals, sea turtles and other surface megafauna with significant impacts for our understanding from a management and Species at Risk perspective.

2020 Biodiversity Goals and Targets for Canada, Summary for marine ecozones (CSAS SAR - 2010/030) , and the Placentia Bay Grand Banks LOMA ecosystem (CSAS resdocs - 2010/026) . This science-based technical report corresponds to the Newfoundland and Labrador Shelves Ecozone and is a compilation of available scientific and technical information on the condition, trends, drivers, and stressors of the ecozone.

Atlantic Zonal Monitoring Program (AZMP) Data collected include biological, chemical, and physical field data that will allow for a better understanding and prediction of changes in ocean state, for example in relation to climate change or environment-fisheries interactions.