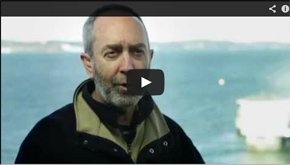 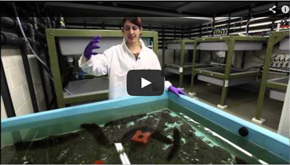 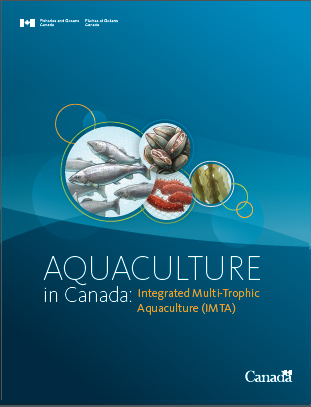 Scientists are looking at innovative ways to improve the productivity and environmental sustainability of marine aquaculture practices. Integrated Multi-Trophic Aquaculture (IMTA) is a concept for culturing multiple species on one aquaculture site that has the potential to provide economic and environmental benefits. Fisheries and Oceans Canada (DFO) researchers are working with partners to explore this potential and to provide a sound scientific foundation for future responsible development and expansion of IMTA in Canada.

Between 2001 and 2006, a team of scientists in New Brunswick ran an industrial-scale pilot IMTA system by co-cultivating salmon, kelp, and blue mussel at several aquaculture sites in the Bay of Fundy. After five years of research, findings support the establishment of IMTA systems for environmental sustainability (bioremediation), economic diversification (from fish filets to bioactive compounds), and social acceptability (better management practices). With the proper monitoring and depuration management, researchers found mussels and seaweeds from the IMTA operations could be safely harvested for human consumption.

Researchers evaluated the feasibility of using polychaete worms grown in cages on salmon IMTA sites with first and second year fish. The lab study showed that the worms could be grown successfully on a diet composed of salmon food/faeces; but field trials indicated that production was lower than expected.

Newfoundland researchers investigated the feasibility of culturing mussels as a component in a cod IMTA system. Experiments were undertaken over a 10-week timeframe to measure changes in the biochemical composition of mussels fed cod effluent compared to starved mussels, and mussels fed algae. Preliminary results revealed that the bulk of effluent leaving cod tanks was too large for mussels to ingest.

Researchers characterized the effect of various diets on the biophysical properties of mussel faeces in order to inform modeling nutrient dynamics of IMTA systems. Results indicated that, regardless of diet, small mussels produced biodeposits that dispersed over larger areas than those produced by larger mussels as a function of sinking velocity.

In order to successfully implement mussels as a full commercial crop in IMTA system, a consistent collection source for mussel spat must be identified. An IMTA group thus examined the potential for reusing old salmon nets previously treated with cuprous oxide for mussel spat collection in the Bay of Fundy.

To better understand the pathways of effects within IMTA farms in New Brunswick, researchers studied the flow of nutrients from salmon farms and their effects on the growth and reproductive physiology of various filter-feeding molluscs within the localized farm ecosystem.

Researchers investigated the feasibility of incorporating the Green Sea Urchin in an IMTA system because of its relatively high economic value and ability to ingest larger organic particles descending from finfish cages. In addition, this urchin is often found around salmon aquaculture sites. The project was part of a larger initiative looking at the degree to which aquaculture sites impact the relative growth rates of organisms away from the site.

Between 2007 and 2009, researchers at Kyuquot SEAfoods Ltd investigated the feasibility of a full-scale Sablefish, sea cucumber, sea urchin, shellfish, and kelp operation. The study was focused on three main areas: determining whether sea cucumbers effectively used the settled waste below net pens; whether modification could be made to steel cages to accommodate more range of depth for shellfish than is possible with traditional wooden rafts; and whether kelp seed could be set throughout the year to ensure consistent, adequate interception of dissolved nutrients and continuous, commercially viable production. Preliminary results strongly indicated that sea cucumbers would utilize waste deposits below fish pens as a food source and did not appear to accumulate heavy metals or other trace contaminants. Sea cage modifications developed during the study also facilitated simultaneous culture of more than one type of shellfish, such as mussels near the surface and scallops at depths of up to 15 meters. Timing of kelp seedling development could also be controlled to allow year-round seeding and harvest. This is the first IMTA site to be approved in British Columbia.

Results from a 12-month study suggest the feasibility of a commercial-scale polyculture system of Pacific Oysters and sea cucumbers in reducing the amount of organic deposition underneath the British Columbia oyster farm while producing a secondary cash crop.

Researchers set out to determine the effectiveness of a pilot wasabi grass system in reducing total phosphorus and nitrogen levels in effluent water from a freshwater salmon farm. The study also investigated food safety issues regarding effluent and commercial hydroponic crops.

Emerging studies suggest mussels may have the ability to destroy the infectious salmon anemia (ISA) virus. IMTA researchers are determining the ability of mussels to affect the occurrence and titer levels of various fish pathogens in their environment. The results from an experiment conducted in 2007-08 suggest that mussels are effective at depleting ISA and infectious pancreatic necrosis viral types. However, they are not as effective on Nodavirus; nor do mussels seem to deplete bacteria kidney disease or furunculosis bacteria in the water column in the same fashion as viruses.