Atlantic Salmon aquaculture operations require a method of controlling infestations of the parasitic sea lice (Lepeophtheirus salmonis). One means of controlling sea lice infestation is SLICE® (emamectin benzoate (EMB)), a synthetically derived compound delivered orally in feed and absorbed from the gut into tissues. Health Canada (HC) and the Canadian Food Inspection Agency (CFIA) have set guidelines for the use of this product including a Maximum Residue Limit (MRL) and a withdrawal period. However, these guidelines were considered stringent in comparison to other national jurisdictions and placed restrictions on planned and emergency harvesting operations for producers that resulted in unnecessary marketing barriers. To study the depletion rate of EMB in comparison to set withdrawal times, this project investigated the rate of depletion of SLICE® residues in the tissues of Atlantic Salmon (Salmo salar) in both controlled laboratory and commercial settings. Laboratory and field operations monitored an administration of SLICE® at a dose rate of 50 micrograms per kilogram (μg / kg) body weight per day for 7 consecutive days. The depletion of the compound from tissues was monitored at intervals from 1 to 45 days post treatment. Mean EMB residues in laboratory samples ranged from 7.3 to 60.5 nanograms per gram (ng / g) in muscle tissue and 28.1 to 199.7 ng / g in skin tissue. MRL levels allowed by HC and CFIA were 100 and 1000 ng / g, in muscle and skin tissue respectively at the time of this study. MRLs at this level were not detected in the field or laboratory results indicating that actual residue levels of EMB did not exceed the set limits. Results from this project were fundamental to the 2009 full approval and registration of SLICE® by HC, which included amending the withdrawal period to 0 days.

The Aquaculture Collaborative Research and Development Program (ACRDP) is a Fisheries and Oceans Canada (DFO) initiative to increase the level of collaborative research and development activity between the aquaculture industry and DFO. Projects under ACRDP seek to improve aquaculture environmental performance and support optimal fish health.

SLICE® (emamectin benzoate; EMB) is a semi-synthetic compound used for the control of the sea lice (Lepeophtheirus salmonis) in farmed salmon. When fed to fish orally it is absorbed from the gut into tissues where it is metabolized and excreted into the skin and mucus resulting in sustained efficacy for up to 10 weeks against sea lice infestations. The manufacturer-recommended dosage for EMB is 50 micrograms per kilogram (μg / kg) per day for a duration of 7 consecutive days. The compound acts as a neuroblocker in sea lice, which results in paralysis and ultimately the death of the parasite. The control of sea lice is crucial for farming operations as sea lice populations can increase rapidly and cause significant economic consequences for the farm.

SLICE® was submitted for approval of use to Health Canada in 1999, receiving full Canadian registration in late 2009. During the registration period, emergency use of the product was on a case-by-case basis and approved through the Veterinary Drugs Directorate (VDD) of Health Canada's (HC) - Emergency Drug Release Program (EDR). Guidelines for Maximum Residue Limit (MRL) were set at 42 micrograms per gram (μg / g) and salmon were not allowed to be harvested for the food chain for 68 days following the last SLICE® treatment, at water temperatures of 5°C or greater. Most international aquaculture jurisdictions that have similar restrictions have developed higher MRLs (e.g., 100 ng / g) and shorter withdrawal periods (e.g., 0 days in U.K. / Chile; 7 days in Norway). The extensive withdrawal period in Canada had placed a constraint on the flexibility in marketing salmon which had been treated with SLICE® within the past 68 days.

HC and the Canadian Food Inspection Agency (CFIA) had agreed to revisit the guidelines regarding MRL and withdrawal periods if solid data could be provided regarding EMB residue times to better guide decision-making.

The current study used laboratory and field-based projects to aid in filling knowledge gaps concerning depuration of EMB residues in tissues of Atlantic Salmon (Salmo salar) (Figure 1). The project utilized water temperatures more comparable to sea water temperatures when sea lice infestations and industrial use of SLICE® occurs. The main objective of the study was to produce a residue depletion curve for EMB in farmed Atlantic Salmon to provide guidance in HC and CFIA decision-making regarding changes to the MRL and withdrawal time limits. 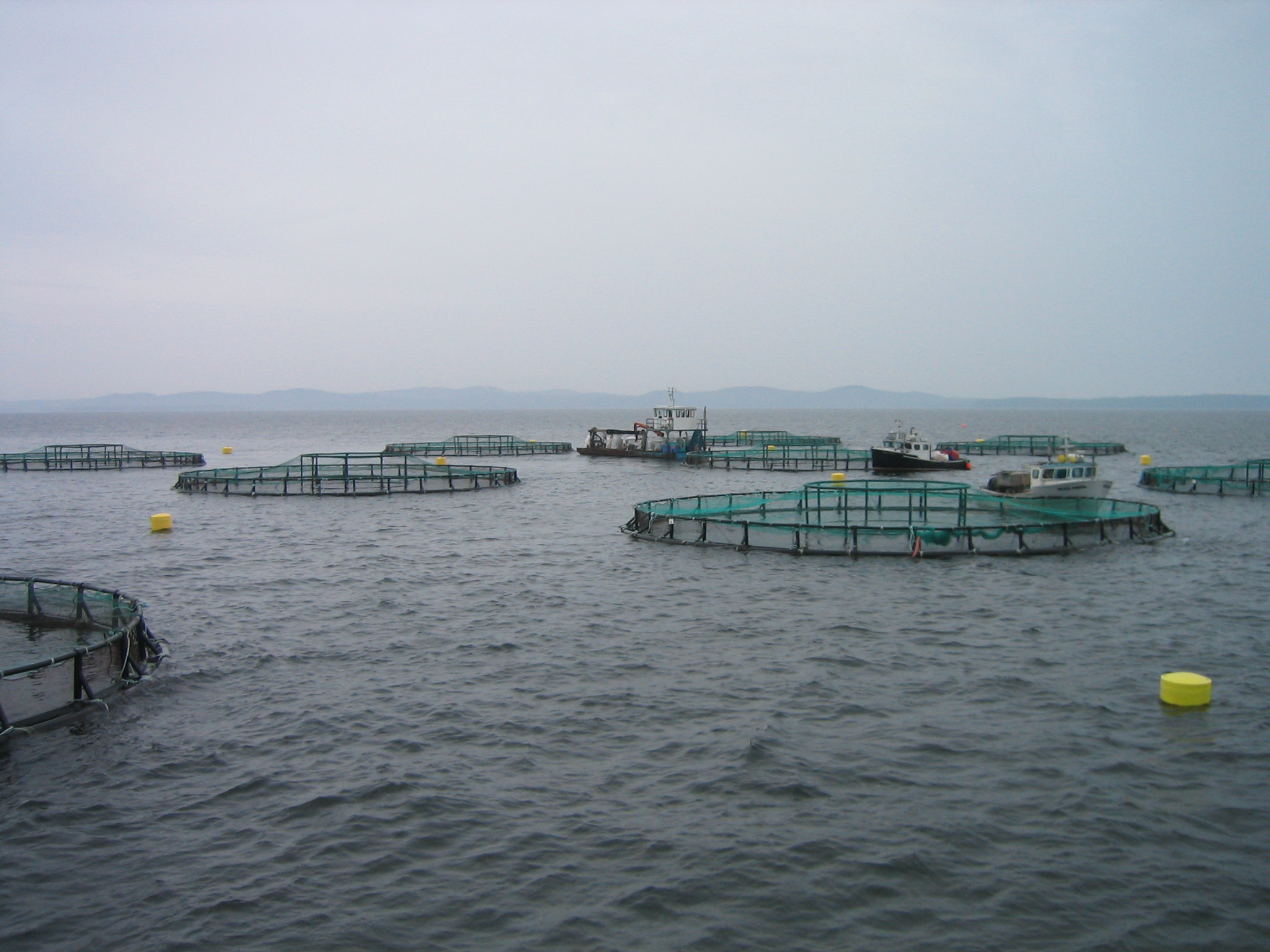 The laboratory portion of the study used animal holding facilities at the Marine Research Station, Sandy Cove, Nova Scotia. Experimental tanks were supplied with temperature-controlled sea water within a flow-through culture system during the treatment and post treatment periods, with the following parameters: temperature (10.08 ± 0.26 °C); salinity (32-35 grams per litre (g / L)); dissolved oxygen (10.7 ± 1.2 mg / L); and water inflow rate (37 L / min). The field portion of the study was based on sample collection from commercial marine cage sites that had been treated with SLICE®. Unlike the laboratory trials, field samples involved collecting salmon that were exposed to ambient water conditions (temperature, salinity, etc.).

Feed for salmon used in the laboratory trials came from several feed suppliers, depending on the trial; all salmon involved in the single dose challenge were fed Signature Salmon Ration (Northeast Nutrition Inc.). EMB pre-mix and quality control instructions were provided directly to the feed mills by Intervet Schering Plough. Nominal concentration of EMB in the medicated feed was confirmed by Cantest Ltd. (B.C.) and used to determine the daily feeding rate required to achieve the target dose of 50 μg / kg for 7 feeding days. The EMB concentrations were also tested by two other laboratories for dose confirmation purposes.

Several laboratory-based trials were performed during the course of this project. The single dose trial involved feeding Atlantic Salmon the manufacturer’s recommended dose of EMB and then collecting tissues at various times following the cessation of medicated feeding in order to ascertain tissue residue levels of EMB. A more complete synopsis of this study can be found in Whyte et al. (2011).

Based on weight, fish were randomly assigned into 7 groups of 28 fish to obtain uniform group biomass. An additional 21 fish were used as a control. Prior to initiation of the experiment the fish were marked using external colour-coded tags placed immediately ventral to the dorsal fin to indicate treatment group and sampling interval (Days 1, 3, 5, 10, 15, 30 and 45). Furthermore, 4 fish were randomly assigned as baseline fish from the experimental groups and sacrificed for tissue collection prior to treatment with medicated feed. The experimental study fish were held separately from the internal control group until post treatment – defined as the point at which all medicated feed was flushed from tanks. Fish were fed at a rate of 0.78 % per kg body weight per day with the ration split between two feeding periods: morning (AM) and late afternoon (PM). Non-medicated feed was supplemented to achieve an overall feeding ration of 1 % body weight per day.

Upon completion of the medicated feed regime (Day 7), fish were randomly selected from each pre-assigned group and sampled at each of the designated sampling periods post treatment. After day 1 post treatment, supplementary samples of two fish from sampling days 3 and 5, and three fish from sampling days 10, 15, 30 and 45, were randomly selected to provide an estimate of the distribution of EMB in the study population.

Participating cage sites were selected from candidate commercial sites engaged in, or planning near future EMB treatments. Selection of sites and sampling was arranged through the New Brunswick Department of Agriculture, Aquaculture and Fisheries (NBDAAF).

Sampled fish were euthanized by anesthetic overdose, weighed and allowed to bleed out in an ice-seawater bath to mimic the aquaculture industry salmon processing procedures. Fish were rinsed with saltwater, individually bagged and transported on ice to the laboratory. Samples taken consisted of the fillet with skin from both sides of the fish. All samples were frozen at -10°C until analysis.

Feeding behaviour declined following administration of the medicated diet in the laboratory, to the extent that fish on day 2 were observed to stop feeding. In response, a freeze dried krill top coating (2% by weight) was applied to increase palatability. Although little or no palatability issues have been reported by prescribing veterinarians in the Atlantic Canada aquaculture industry (pers. comm. Dr. Mark Moore, MVS, Upper Letang, NB), feeding behaviour did return to normal for the medicated period, following the addition of the krill product. No considerable rejection of feed was reported in the field trials by site workers, and on-site feeding was reported to be within the expected daily feed ration.

Results obtained from the three confirmatory laboratories testing the inclusion rate of EMB in the medicated diet produced three unique quantities (Table 1). A desired inclusion rate of 10 mg / kg resulted in values ranging from 6.6 mg / kg to 8.8 mg / kg (or 54 to 88% of target concentration). The nominal dose of EMB in feed as measured by Cantest Ltd. was marginally statistically lower than what was measured by two other laboratories (p = 0.0513).

Average weight gain at day 45 was 5.8 g per day and all fish were significantly heavier than they were at the start of the trial (p = 0.0001). There was no significant effect of sex or maturity on depletion of EMB in either muscle or skin of fish fed the medicated diet (p = 0.321). All fish were observed to be healthy on examination and no abnormalities or deformities were evident in any sampled fish. 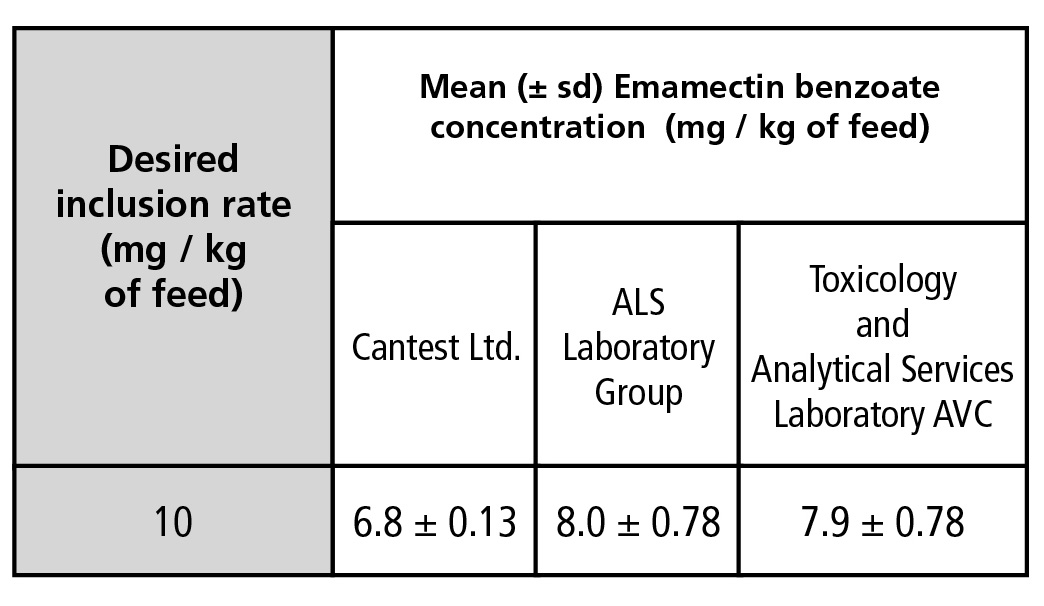 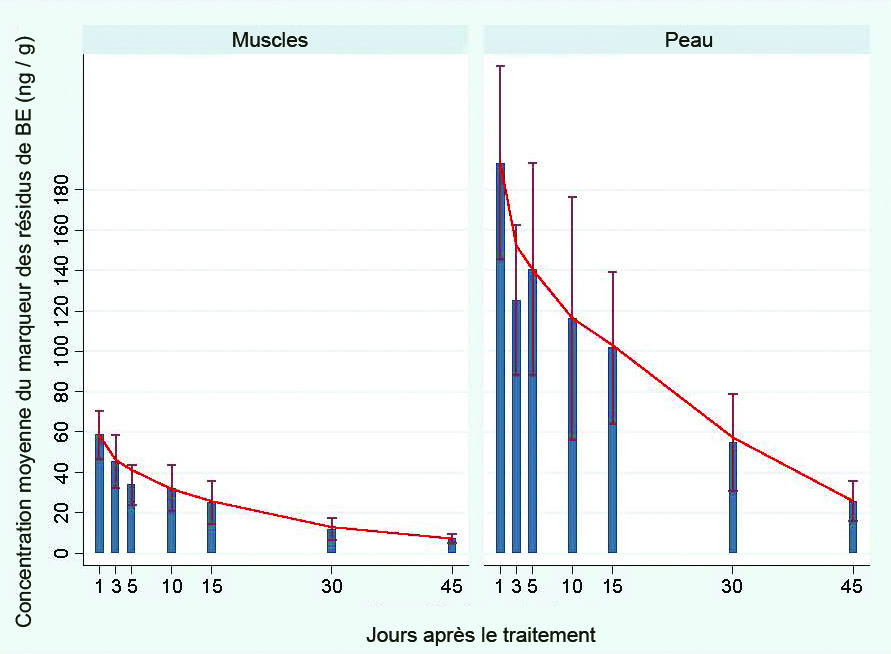 Concentrations of EMB in tissues never attained the maximum allowable residue levels of 100 and 1000 ng / g for skin and muscle that were set by HC and CFIA. EMB residues in tissues from field-based trials supported the findings of laboratory experiments, in that immediately following the 7-day treatment regimen of SLICE®, the tissue concentrations never exceeded the imposed levels. Residue concentrations in field tissue samples varied between sampled fish. The depuration range of EMB from muscle tissues quickly fell to negligible levels within 3 to 7 days post-treatment.

At the time of this study the maximum residue level for fish destined for human consumption established by the VDD of HC, and CFIA, was 100 ng / g for the target tissue, muscle, and 1000 ng / g for skin. In this study levels of EMB residue near these limits were not recorded in the skin and muscle at the recommended dosage of 50 μg EMB per kg. The results of this project were fundamental in the 2009 full approval from the Veterinary Drugs Directorate (VDD) of SLICE® and the amendment of the withdrawal period to 0 days. The monetary value of the findings of this project cannot be accurately stated, however, access to this product is worth millions to the industry with respect to sea lice control and salmon market access.

This ACRDP project (MG-06-04-004) was a collaborative effort between Fisheries and Oceans Canada (DFO) and the Atlantic Canada Fish Farmer’s Association. The lead scientist on this project, Dr. Phil Byrne, can be contacted at Philip.Byrne@dfo-mpo.gc.ca.

For further information on this and other ACRDP projects, visit: Aquaculture Collaborative Research and Development Program (ACRDP)

©Her Majesty the Queen in Right of Canada 2013