The mechanization of the British Columbia (BC) shellfish aquaculture industry is one means of increasing its competitiveness within the global shellfish market. Currently, the traditional hand rake is the primary method of harvesting shellfish. This is a labour-intensive activity yielding medium production levels. A mechanical harvester has the potential to greatly reduce harvesting costs and increase production output. To determine the feasibility and potential benthic impacts of using a mechanical harvester, a comparative environmental assessment and operational performance of both mechanical and manual (i.e. hand rake) harvesting techniques were undertaken. In July 2008, assessments were conducted at three study sites in Baynes Sound, BC. Each of the three sites contained a mechanical and manual harvest plot. Sampling stations were at fixed positions at varying distances (0, 1, 25, 50, and 75 m) from each plot along transects following the dominant current direction. Surveys were conducted both pre- and post-harvest. Parameters measured included in situ sediment sulphide concentrations, redox (or reduction-oxidation) potential, sediment grain size, visual condition of substrate through digital imagery, sedimentation (silt flux) and sediment macro-faunal composition. Generally, no major differences were observed between the effects of both harvest methods. Sulphide, redox potential and sedimentation sampling showed high variability within treatment plots and transects, within all samples for each beach, and between mean samples for each beach. Due to high levels of variance observed in all parameters measured, definite conclusions cannot be made about significant differences in environmental effects between the harvesting methods. Despite the variability in results, it was observed that sedimentation from both mechanical and manual harvesting was negligible in comparison to the massive sediment flux occurring during natural processes (e.g., storm events).

Shellfish farmers in British Columbia (BC) have been finding it difficult to compete in the international shellfish marketplace, owing to certain economic and societal variables. In particular, the strength of the Canadian dollar and difficulties in finding and maintaining farm labour are presenting challenges. To increase their competitiveness, BC shellfish farmers must find ways to increase their productivity while, at the same time, reducing harvesting costs. For certain species, the use of a mechanical harvester has the potential to greatly reduce harvesting costs, therefore leading to increased profitability. 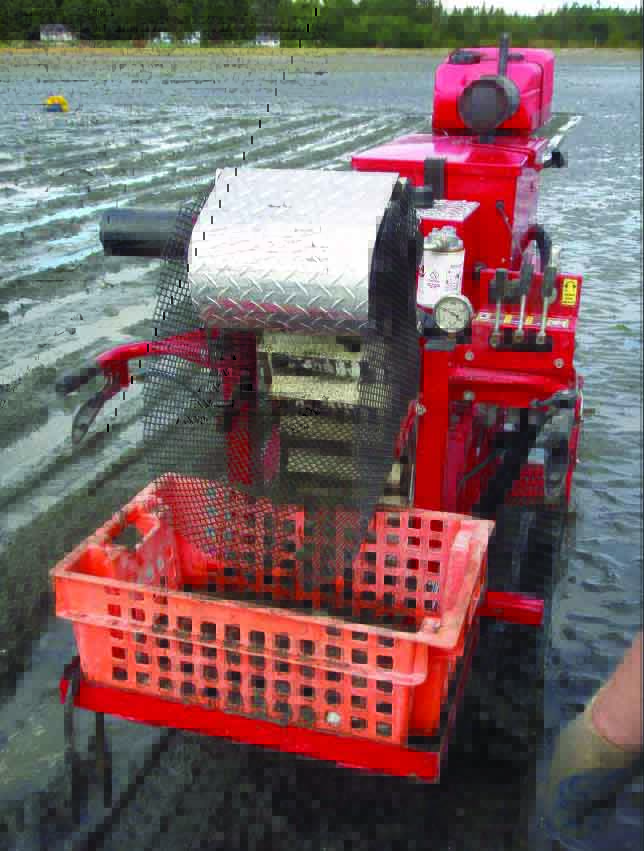 The Manila Clam (Tapes philippinarum) has been harvested on the coast of BC since the 1970s. Almost all clam harvesting in BC is done by hand, using rakes with precisely spaced long tines and shortened handles that allow harvesters to quickly move through the substrate and hand pick the clams. Despite the speed at which some skilled harvesters are able to work, it is still expensive and physically demanding labour. A shellfish farmer in Samish Bay, Washington, USA, modified a mechanical tulip bulb harvester (Figure 1), designed for the greenhouse industry, to successfully automate Manila Clam harvesting. Shellfish farmers in BC have expressed interest in this technology for use in Canada, however, there are concerns about the impact that this harvesting technique may have on the local environment. In 2008, the British Columbia Shellfish Growers Association (BCSGA) in collaboration with Fisheries and Oceans Canada (DFO) began a project to assess the potential environmental impact of mechanical shellfish harvesting compared to the traditional method of hand raking.

The main objective of this project was to assess and compare the potential near-field effects of mechanical and hand harvesting of Manila Clams. The information collected will inform the regulatory approval process for this new activity should shellfish farmers choose to pursue this technology.

Three intertidal beaches (Comox, Royston, and Ship's Point) located in Baynes Sound, Vancouver Island, BC were selected to be representative of the anticipated varying physical conditions that might be encountered during routine use of the mechanized clam harvester. All sampling sites were comprised of a mix of gravel/sand which is considered ideal for clam culture.

A comprehensive sampling and survey program was designed for each of the three study sites. Each site consisted of a mechanical harvest plot and a manual harvest plot (both 15 m x 30 m). Sampling stations were established within the plots and downstream from each plot at fixed positions of 1, 10, 25, 50, and 75 metres along a transect. Three replicate samples were taken at each sampling location and the following variables were measured: in situ sediment sulphides, redox (or reduction) potential (Eh, redox), sediment grain size (SGS), visual condition (colour, texture through digital imagery), sedimentation accumulation (silt flux) and sediment macro-faunal composition. Both pre-harvest and post-harvest sampling was conducted.

In January 2009 and 2010 sediment canisters were deployed in triplicate at each of the baseline sampling sites to determine the sediment flux occurring during a natural disturbance event.

The pre-harvest assessments for the study sites were completed in July 2008. The residual flow information from these data established the orientation of the sampling transects for the other components of this study.

Sulphide and Eh data showed high variability within treatment plots and transects, within all samples for each beach, and between mean samples for each beach. Sulphide concentrations ranged from 11.2 μmol at the Royston mechanical-harvester plot to 944 μmol at the Ship's Point mechanical-harvester, 10 m station, being within a normal oxic range. Redox potential varied from positive to negative values. The variance seen in the redox measurements and sulphide concentrations was typical for the operational limitations. Visually, none of the experimental sulphide / redox samples indicated any differences compared to those collected from the reference areas. No statistical analyses were performed on the physical-chemical data; however, no obvious differences in sulphides or redox potentials were observed between harvesting methods. The temperature range of the samples fell between 14.6 and 25.7°C, depending on how quickly the sample was collected and analyzed. 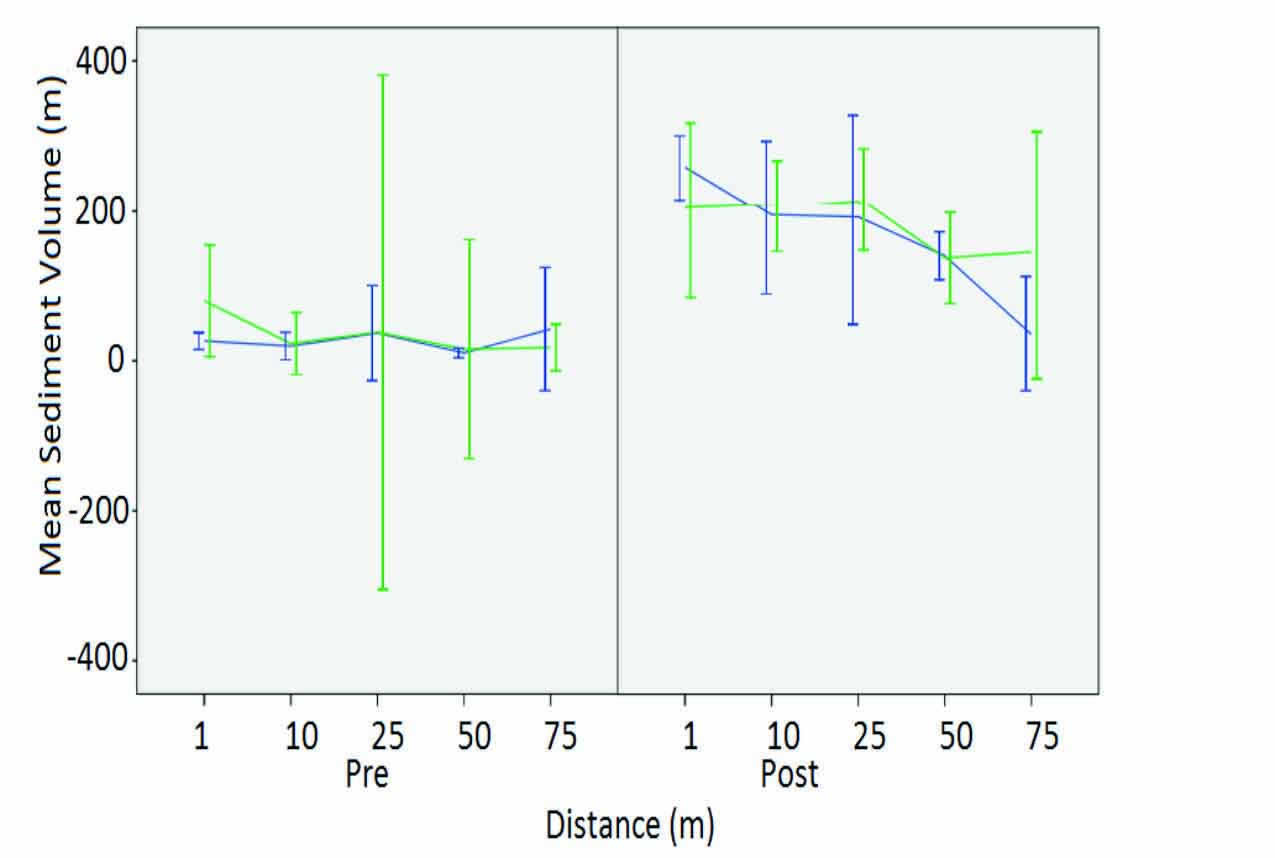 All sedimentation sampling parameters displayed high amounts of variability. Only one beach (Royston) showed a significant difference in sedimentation between mechanical and hand harvest sampling for individual stations. However, this difference was observed in both the pre-harvest (50 m, p=0.026) and post-harvest (10 m, p=0.032; 25 m, p=0.026; 50 m, p=0.015) samples. Since pre-harvest data were considered to be baseline, the observed difference post-harvest could not be directly attributed to differences in harvest methods.

Further tests showed that only the post-harvest transect at Royston beach (p<0.0001) displayed a significant difference in sedimentation between mechanical and manual harvesting. All other transects (pre- and post-harvest; mechanical and manual; all beaches) showed no significant difference in sedimentation.

The sediment grain size analyses indicated that there was a significant correlation (p<0.0001) between sedimentation and percent mud (small grain size) for the Royston beach post-harvest.

Canister samples that were collected during winter storm events for each sampling beach were uniformly and completely filled with sediment. The high levels of sedimentation flux observed during storms were far greater than any that had been seen during the pre- and post-harvest sampling events for both mechanical and manual harvest.

Biological samples were highly variable with respect to species composition and abundance and did not provide information that was considered to be a useful addition to those data generated through the sedimentation and physical-chemical components of the program. The purpose of the biological data was to measure the potential effect on macro-fauna composition should a significant siltation event occur, however, since no major siltation effect was observed these data were not analyzed for significance.

Only one study beach (Royston) showed a significant difference in post-harvest sedimentation between mechanical and manual harvesting methods. Most likely this can be attributed to the observed differences in percent mud in the sediment grain size analysis between manual and mechanical plots at this site. Small and light particles (such as mud) are more susceptible to transport by external forces, such as waves and tides, than are larger particles like sand and gravel. This could have attributed to the observed differences in sediment volumes between the treatment plots at Royston beach, suggesting that there is no difference in operational impacts between the mechanical and manual harvest methods applied to sand and gravel beach substrates.

Generally no major differences were observed between the effects of harvest methods; however, based on the variability in field data collected in this study, definite conclusions could not be made on whether environmental effects are significantly different between manual and mechanical harvesting methods. Despite this inherent variability, this study has demonstrated that the natural disruptive processes that occur in any wind-induced turbulence event produce far greater environmental impacts than with either sampling method. As such, it is considered unlikely that mechanized harvesting would be more environmentally disruptive than would naturally occurring events. However, further studies would be needed to conclude whether or not this harvesting method is more disruptive than traditional hand harvesting methods.

This ACRDP project (P-08-03-005) is a collaborative effort between the Department of Fisheries and Oceans (DFO Science) and the British Columbia Shellfish Growers Association. The research was conducted by David Stirling (graduate student) under the supervision of Dr. Stephen Cross. Dr. Cross can be contacted at sfcross@office.geog.uvic.ca (or sfcross@SEAvisiongroup.ca).

For further information on this and other ACRDP projects, visit: Aquaculture Collaborative Research and Development Program (ACRDP)

©Her Majesty the Queen in Right of Canada 2013