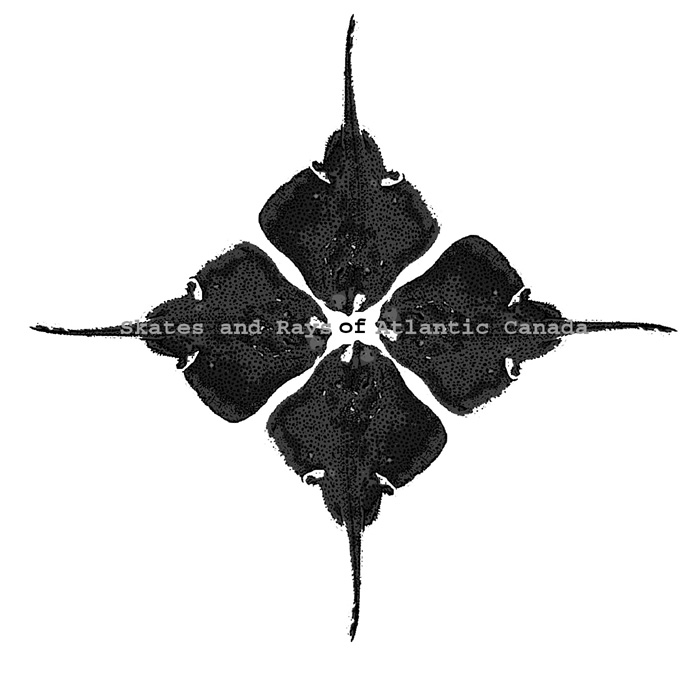 There are over 500 species of skates and rays in the world, with 16-17 species residing either as year-round residents or occasional visitors in Atlantic Canada waters. Skates and rays are easily distinguished from other fish by their disc-shaped, dorso-ventrally (i.e. from top to bottom) flattened bodies and expanded pectoral fins which attach to the sides of the head. This basic body shape allows them to live on or very close to the bottom of the ocean, where they bury themselves in mud or sand to ambush prey and avoid predators. However, a number of species, such as members of the family Myliobatidae, have become nektonic, using their enlarged pectoral fins to literally "fly" through the water.

Despite this diversity, however, skates and rays - collectively known as batoids - are a little-known group. Even the most basic life history information is lacking for most species, including those residing in Atlantic Canada waters. For example, we know little about how old skates and rays get, when they mature, whether they have nursery grounds, how far they migrate, and how vulnerable they are to over-exploitation. And unfortunately, with species-specific data on batoids being virtually non-existent in most cases, many species are declining in abundance as their importance in directed and bycatch fisheries increases.

This website was created in the hopes of increasing public awareness about these fascinating and underappreciated marine fishes. Many questions concerning basic batoid biology can be answered using this website, along with more detailed questions concerning northwest Atlantic species. Also covered are some of the research initiatives being undertaken by scientists at the Canadian Shark Research Lab at the Bedford Institute of Oceanography and at the Marine Fish Species at Risk Section at the Northwest Atlantic Fisheries Center to better understand the biology, abundance, and population health of skates and rays in Atlantic Canada waters, so that these enigmatic fishes remain a vital part of our ocean ecosystem.