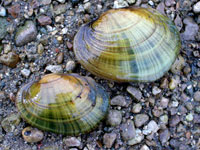 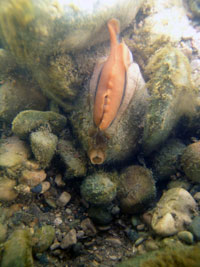 Wavy-rayed Lampmussels, once considered an endangered species under the Species at Risk Act, have been found in such promising numbers that their status was reassessed in 2010 to be considered for downlisting.

“This is definitely a good sign,” noted Todd Morris, Research Scientist at Fisheries and Oceans Canada. “It is a direct indication of water quality improvement.”

Wavy-rayed Lampmussels are bottom-dwellers found in Ontario’s lakes and rivers. They can live up to 33 years and initially survive by attaching to bass gills and feeding on their nutrients for the first few weeks – with no ill effects to the bass. The Lampmussel uses a visual lure to attract bass, so clear water is essential to its survival. And their survival has benefits to the aquatic ecosystem as a whole.

Lampmussels have an important impact on the ecosystem in a number of ways. To begin with, they are biological filters that help to clean the water. A single mussel can filter up to 40 litres of water per day. “Multiply that by the thousands of individual mussels, and it has a pretty big impact,” noted Dr. Morris. They also ensure the physical stability of the river bottom, prevent erosion, and provide important habitat for other species. Lampmusssels are also great indicators of aquatic health, because, as particularly sensitive creatures, they are usually one of the first to disappear from an unhealthy ecosystem. So their increased number is definitely something to be happy about.

Buoyed by greater funding thanks to the original species at risk designation, researchers were able to further investigate and understand Wavy-rayed Lampmussel populations, and were thrilled to find greater numbers. DFO researchers in Ontario’s Grand River partnered with a local bass tournament in 2006 and were amazed to find that as many as 45 percent of Smallmouth Bass brought in by anglers were carrying immature mussels.

“These numbers are an indicator of better things to come,” said Dr. Morris. “It is an overall good sign for the ecosystem.”