Torrent River, located in Hawke's Bay, Ingornachoix Bay on the island's Great Northern Peninsula, is the site of one of the region's most successful salmon enhancement projects in Newfoundland and Labrador.

Since salmon return to their river of birth, the answer to this challenge was an Adult Salmon-Stocking Program in the upper tributaries of the Torrent River. After extensive evaluation, Western Arm Brook, a healthy salmon river 80 km north of the Torrent River, was chosen as the donor stream.

From 1972-1976, DFO annually transferred 50 to 300 adult salmon by helicopter from Western Arm Brook into a good spawning habitat upstream from the fishway. As well, the recreational salmon fishery was closed on Torrent River from 1976 to 1977, and in 1980 and 1984.

The Adult Salmon-Stocking Program was a success. Salmon born above the falls in Torrent River returned to the upper reaches of the river to spawn and a healthy, viable salmon population was created. The salmon count at the fishway increased from 58 fish in 1971 to a high of 7,000 in 1996 and has remained at approximately 4,000 salmon in the years since.

Atlantic salmon spawn in shallow gravel-bottomed streams during the fall. The female first makes a nest using her tail to force water to displace the gravel. The female deposits her eggs as the male fertilizes them. The female covers the fertilized eggs with gravel, forming a mound known as a 'redd'. Over the winter months the eggs slowly develop, hatching in the spring. Once the yolk sac is depleted, young salmon emerge from the gravel and begin to feed.

After 3-4 years in the river, the young salmon, now called 'smolt', move downstream to salt water.

It is important to continue to protect and conserve the habitat of Atlantic salmon and other fish species found within Torrent River. The Fisheries Act prohibits the harmful alteration, disruption or destruction of fish habitat without authorization from Fisheries and Oceans Canada. The Habitat Management Division of Fisheries and Oceans Canada has developed a series of fact sheets describing habitat protection measures and procedures to follow when proposing developments in or near streams such as Torrent River and its many tributaries, for Newfoundland and Labrador. By following these guidelines, developers and the public can help ensure the continued protection of fish habitat.

Before 1965 only a small population of Atlantic salmon lived in the Torrent River and was confined to the lower section. A 10-m-high waterfall, located about 2 km from the mouth of the river, prevented salmon migration into the much larger spawning and rearing areas upstream.

Research indicated that giving salmon access above the falls would boost the population and improve the recreational fishery on the river. In 1965, Fisheries and Oceans Canada (DFO) developed an enhancement program which included the design and construction of a fishway past the falls. Resembling a series of stairs, the fishway enabled adult salmon to swim up and over the falls through a series of 34 gradually elevated pools.

At first, most salmon did not use the fishway. Creating a new enlarged viable spawning stock with so few salmon straying to the fishway did not seem promising. Fisheries and Oceans realized it would take five-year cycles, or generations, to fully populate the area. 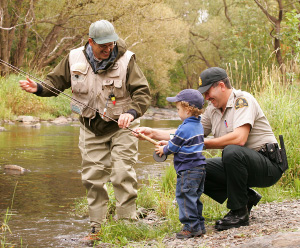 The success of the Torrent River Enhancement Project continues today through community and government partnership. In 2006, a new modern structure, complete with underwater-viewing windows replaced the fishway that provided passage to spawning grounds for more than 35 years (seven generations of salmon). The new fishway is a real-life laboratory for Fisheries and Oceans' scientists and students. Fisheries and Oceans maintains the fishway and works with community groups to monitor salmon passing through the structure. Through the observation window, each salmon is counted as it leaves the trap at the upstream end of the fishway. With the co-operation of anglers, salmon catches downstream from the fishway are also monitored, providing important biological information on the Torrent River salmon stock.

Fisheries and Oceans Canada continues to work with the town of Hawke's Bay Interpretation Centre Committee that includes community development organizations and other federal and provincial agencies, to provide tours to provide people with information about the history and success of the Fishway and Stocking program.

Today more than ever before, communities and other interested parties are playing a role in the sustainable use of all coastal and ocean resources through stewardship and participation in scientific and environmental education initiatives. The salmon success story on Torrent River continues to be an example of how communities and government can work together to make resource management decisions that will ensure the social, economic and environmental sustainability of the salmon resource.