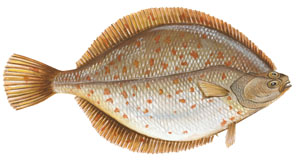 Yellowtail flounders are found along the east coast of North America. Their range begins in Newfoundland and Labrador and stretches south to Chesapeake Bay. In Canada, yellowtails occur mostly along the continental shelf in the Grand Banks and the Georges Bank. They are usually found at depths of about 40-70 metres, rarely at more than 100 metres.

Yellowtail flounder is a species of Atlantic flatfish. They are flat and ovate in shape, with a small, upturned mouth and eyes on the upper side of their body. They have a lateral line running across their body that arches after their gill opening. Their tail fin is rounded and, like their name implies, yellow. Yellowtails are good at camouflaging themselves, and their body coloration varies according to that of the ocean bottom. They are usually olive-brown mottled with reddish blotches on their upper side and yellowish-white on their lower side. They grow to 38-40 centimetres and 0.5-0.6 kilograms. In Canadian waters, some yellowtail flounders as old as 12 have been caught, but they rarely make it past 10 years.

We suspect Yellowtail Flounder might constitute a subpopulation for every discrete bank on the Scotian Shelf, with some undetermined degree of mixing between banks. For stock assessment purposes we just separate Yellowtail by the NAFO divisions that encompass the largest concentrations of Yellowatil. Division 4X contains the southern portion of Browns Bank just across the Fundian Channel from Georges Bank, Division 4W contains Sable Island Bank, and [Sub]Division 4Vs contains Banquereau. We used to have a continuum in Yellowtail distribution across the intervening area between Banquereau and Sable Island Bank, but this emptied out as the population declined. Now 4Vs and 4W Yellowtail are very discrete, even the pre-recruits showing a distinct break in distribution.

The Browns Bank fish (4X), besides being so distant from other concentrations of Yellowtail, also demonstrate much lesser magnitudes and different trends in abundance and biomass compared to the Eastern Shelf banks (4VW). The Eastern banks exhibited large declines in abundance since the mid-1970's. This trend appears to have bottomed out by the mid-1990's, and may have begun increasing in recent years (recent years are confounded by inconsistency in survey vessels, which can have different catchabilities for particular fish).

Whereas the fished component of the population declined from the 1980's to mostly record lows since 1993, the pre-recruits have been generally increasing in abundance over the same time period. There has not been a serious fishery in 4VW since 1996 (and 4W has been closed to the fishery since 1987). Even allowing for a negative influence of cold water infusions impeding recovery of the 4W component in the absence of fishing, we would still expect to see stronger signs of recovery of fishable sizes since the mid-1990's. The consistency of the opposing fishable and pre-recruited trends might reflect a decline in the age and size at which Yellowtail reach maturity.This could produce a stable population structure with fish of sizes previously considered immature. Unfortunately we haven't conducted detailed sampling of Scotian Shelf Yellowtail since 1983, and to test the hypothesis we would need to sample the age, size and maturity of the current population.