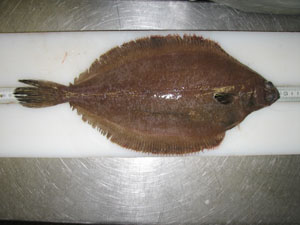 Witch flounders are a species of flatfish found in the north Atlantic Ocean. In the western Atlantic, their range begins in Newfoundland and Labrador and ends in North Carolina. In Canada, they are found in the Gulf of Maine, the Scotian Shelf, the Gulf of St. Lawrence, and the Grand Banks. Witch flounders typically live at depths of 100 to 400 metres, though individuals have been found as deep as 1,600 metres. They prefer soft substrates such as sand, clay or mud.

Witch flounders are strongly, dorsally compressed and oval in shape. Their head and mouth are very small and, like other flounders, they have both eyes on their upper side. A straight lateral line runs across their body length. Witch flounders are a dark greyish-brown on top and greyish-white on their underside, and have dark rims around their fins. They can grow to a maximum length of about 75 centimetres and a weight of about four kilograms.

Witch Flounder occur in the Northwest Atlantic from southern Labrador to Cape Hatteras, usually at 50-300m in water of 2 t 6°C. They occur most commonly in deep holes and channels and along the shelf slope on muddy bottom. There is no evidence that Witch undertake extensive migrations, but there are seasonal changes in concentration associated with spawning, and they may wander appreciable distances over the years by random dispersal. The spawning period is protracted, and on the Scotian Shelf is thought to occur from May to October with a peak in July-August. The post-larval, pelagic phase is unusually long, lasting up to one year, and it is thought that the first few years of demersal life are spent in much deeper water than the adults. Food consists primarily of worms supplemented by other benthic invertebrates such as small crustaceans and bivalve molluscs. Witch is a long-lived, slow-growing species; a maximum age of about 30 yrs and a maximum size of 78cm (weight of about 5 kg) have been recorded.

Trends in abundance over the years appear similar across 4X and 4VW management areas. The abundance of fish over 32cm declined from the 1970's until 1992, but have been increasing since 1992. The increase is likely due to record-breaking recruitment pulses in both the mid-1990's and mid-2000's.

Declining weight at length between the 1970's and 1990's is a cause for concern. The same trend was observed with American Plaice, and was associated with declines in age and length at maturity. We do not have adequate data for Witch Flounder to determine if the same phenomenon holds true. A trend of increasing weight at length since the mid-1990's is promising.