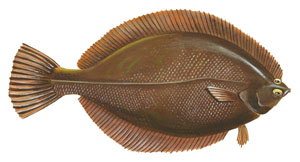 Winter flounder are distributed from the coast of Newfoundland and Labrador in the north to Georgia in the south. Their range is limited to the western Atlantic. Winter flounder live on a variety of substrates: muddy, sandy or pebbled bottoms at fairly shallow depths (usually less than 100 metres). They have been known to venture into the brackish waters near rivers or estuaries.

Winter flounder are oval-shaped fish, strongly compressed and with a fairly straight lateral line leading to a rounded tail. They have a small mouth with few teeth (sometimes none at all). Their body colour varies according to that of the ocean floor. Usually winter flounders are brown, reddish-brown or olive green-nearly black in some cases-with a pale white underside. Sometimes they are mottled or speckled. On the eyed side, their scales are rough. They can grow to a length of 50 cm or more. They have an average lifespan of 11 years for males and 12 years for females.

Concentrated in coastal bays and inlets around the Bay of Fundy, Winter Flounder have a wide salinity tolerance, and occur in waters ranging from typically oceanic to brackish estuaries. Sight feeders, they are usually dormant at night and active by day, except when spawning, which is conducted mostly at night.

Winter Flounder has an interesting history in Canada. Being concentrated in coastal areas of the Bay of Fundy, inside the 12-mile limit in effect prior to 1977, these fish were largely 'off the map' to the foreign fisheries that dominated the industry before World War II. A Canadian commercial fishery for Winter Flounder did not exist until 1948, when exploratory surveys by the Fisheries Research Board (FRB) revealed large concentrations of Winter Flounder in certain parts of the Bay of Fundy. The development is described on an annual basis in the FRB series Report of the Atlantic Biological Station (known today as the St Andrews Biological Station), and was accompanied by extensive tagging studies.

The Canadian Winter Flounder fishery began in St Mary's Bay in 1948, as did the tagging studies. The FRB exploratory surveys, continuing throughout the late 1940's and early 1950's, also found Winter Flounder concentrations in Minas Basin and Annapolis Basin, and fisheries initiated in these Basins in 1949. It became obvious from high tag recapture rates and rapidly declining commercial catch rates from 1948-1950 that St Mary's Bay could not sustain the fishing pressure directed on it. And results of the tagging studies made a clear argument for a discrete St Mary's Bay population. Seasonal movements of short distances were apparent, associated with adjustments to depth. In 1952 32 boats took a million lbs of Winter Flounder, but about half of this came from a new fishing area discovered by the FRB off Cape St Mary, which tagging indicated was another population discrete from that in St Mary's Bay. By this time the FRB had formed the opinion that Winter Flounder contracted in range with declining population (limited preferred habitat), such that densities (and thus catch rates) could be maintained if a long enough break occurred between fishing periods.

The FRB surveys indicated that Winter Flounder in the Bay of Fundy spawned inshore in the spring (May). Tagging studies conducted during these surveys, concentrated in the Annapolis Basin and Passamaquoddy Bay, gave very few recoveries to the east of the respective tagging locations. Although no Winter Flounder from Minas Basin itself were tagged, it appeared unlikely that much interchange occurred with the other concentrations.

By 1963 it had been determined that Winter Flounder moved offshore when the water got above 15°C and returned to the shallows when the water cooled. Usually this would result in a winter/deeper/offshore and summer/shoaler/inshore pattern. However the inshore summer water temperature does not always reach beyond 15°C, in which case the Winter Flounder would remain inshore. The preferred temperature range was determined to be a very narrow 12-15°C, across several populations throughout the NW Atlantic. This means a narrow depth range, accounting for the all-or-nothing nature of Winter Flounder catches, and confounding interpretation of catch rate (catch per unit effort, or CPUE) trends once the distributional range was known to the fishing industry. Thus CPUE declined drastically in the early years of the fishery, but by later years the fish locations could be predicted accurately enough to compensate for population decline. The narrow temperature preference was later (1988) disputed, it being argued that the offshore movement in summer was for the purpose of feeding. In the end both temperature and feeding appear relevant.

Since 1970 we have depended on summer surveys of the Bay of Fundy to monitor trends in Winter Flounder abundance. These surveys are timed for optimal sampling of groundfish species in general. Unfortunately Winter Flounder favour inshore areas during the summer, and these waters are too shallow for the survey vessels to fish. Thus we are sampling the outer margins of the population distribution of this species. As a relative index of abundance this may be fine, just so long as the population remains large enough to exhibit an outer margin. But it is very uncertain how representative any associated biological sampling (i.e. length, weight, maturity, sex, age, diet) of these fish would be of the population. The survey abundance time series shows a decline in larger sizes of Winter Flounder since the 1990's, but an increase in abundance of pre-fishery sizes in the last decade. It will be interesting to see if the spike in abundance of small fish in 2009 translates into increased abundance of fishable Winter Flounder in the next few years.

Unlike most species of flatfish, Winter Flounder populations throughout the North Atlantic often demonstrate strong spawner:recruit relationships wherever the appropriate data is processed. In the Bay of Fundy we don't have enough data on Winter Flounder size at maturity to properly separate spawners and recruits.