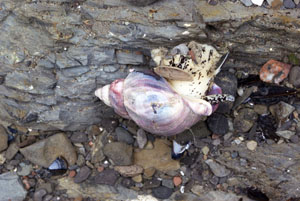 Whelk are a species of marine snail native to the North Atlantic. They have a distribution that starts in Newfoundland and Labrador and extends south to New Jersey, including populations in the Gulf of St. Lawrence. Whelk are abundant within their range. They are found at varying depths, from the intertidal zone to about 40 metres below. They do not move around very much over their lifetimes, and are usually found partially buried in the ocean bottom. A small fishery for whelk exists on Canada's east coast.

Whelk have a heavy, spiral-shaped shell with a pointed tip. Their shell is covered with wavy lateral lines, and their operculum (or shell opening) is somewhat ovate in shape. Their shell colour varies considerably, and can be anything from grey to a yellow or tan, while their foot is white with a mottling of black. Whelk can grow to a maximum diametre of about 10 centimetres.