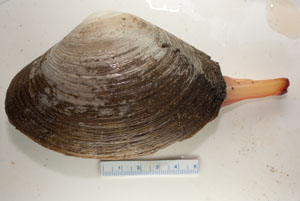 Stimpson's surfclams are found in the Atlantic, Pacific and Arctic oceans, as well as in the Gulf of St. Lawrence. In the western Atlantic, their range begins near Baffin Island and extends south to Rhode Island. In the Pacific, they are distributed from Puget Sound, Washington, north to Alaska and across the Bering Sea to Asia, where they range from Siberia to Japan. Stimpson's surfclams live in ocean areas with sandy bottoms in which they can burrow, at depths from the intertidal zone to about 100 metres.

Stimpson's surfclams are bivalve clams with an oval or sometimes triangular shell. Their shell is rough and has concentric lines running across it. Stimpson's surfclams are white or off-white and covered with yellow or yellowish-brown periostracum, which is the hard, outer shell. They grow to a maximum length of about 150 millimetres, but typically are between 75 and 130 millimetres. They are long-lived-it is believed that some unharvested populations regularly reach 40 years of age.