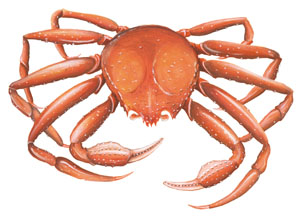 The Atlantic variety of snow crab occurs in the northeastern Atlantic, near the west coast of Greenland and south to the Gulf of Maine. Snow crabs prefer cold water temperatures and occur at a wide range of depths, from 20 to 2000 metres, most often on sandy or muddy bottoms.

Snow crabs are spider-like in shape, with a flat, round carapace (shell) and long, slender legs. Their colour changes as they age. Soon after they moult, snow crabs will be reddish on top and white on the bottom. As they get older, this red will fade to a duller olive shade and their underside will become yellowish. Snow crabs can grow to a maximum carapace width of about 15 centimetres, with males growing more than twice as large as females (females are not harvested commercially for this reason). They have a maximum life span of 12-13 years.

Snow crab (Chionoecetes opilio) is a subarctic species found in the northern hemisphere. They are found in the Sea of Japan to the Bering Sea (Alaska and British Columbia). They also extend from west Greenland down the Canadian Atlantic coast to Nova Scotia. Recently, they have been observed and/or introduced into the North and Barents Seas.

Habitat preferences are soft mud bottoms. Smaller crabs are found in more complex habitats with shelter. Larger crab are found at depths from 50 to 300 m and temperatures from -1 to 11 °C on the Scotian Shelf. Extended exposure to temperatures greater than 7 °C are thought to be detrimental to snow crab. Their primary food include: shrimp, fish (capelin and lumpfish), starfish, sea urchins, worms, detritus, large zooplankton, other crabs, ocean quahaug, molluscs, sea snails and sea anemones. Predators of snow crab are halibut, skates (especially thorny skate), cod, seals, American plaice, squids, and other crabs. Crab in the size range of 3 to 30 mm carapace width (CW) are particularly vulnerable to predation as are soft-shelled crab in the spring moulting season.

A female snow crab produces from 16,000 to 160,000 eggs in the spring which are brooded by the mothers for up to 2 years, depending upon ambient temperatures, food availability. Eggs are hatched from late spring to early summer when they become pelagic (zoea stages 1 and 2 and the intermediate megalopea stage) feeding upon plankton. After 3 to 5 months in the pelagic stage, they settle to the bottom in late autumn and winter. Bottom dwelling postlarval stages (instars) moult approximately twice a year until they reach instar 5 after which they generally moult once a year, up to a terminal moult which occurs somewhere between instars 9 to 14 for males, and 9 to 11 for females. Snow crab can become sexually mature by the 9th instar. Prior to the terminal moult, male crab may skip a moult in one year to moult in the next. Male snow crab reach legal size by the 12th instar, representing an age of approximately 9 years since settlement to the bottom. Some males of instar 11 will also be within legal size.

Females begin to moult to maturity at an average size of approximately 55 mm CW and mate between winter/spring while the carapace is still soft. Complex behavioural patterns have been observed: the male helps the female remove her shell during her moult, protects her from other males and predators and even feeds her (indirectly). Pair formations (mating embrace where the male holds the female) have been seen to occur up to 3 weeks prior to mating. Upon larval release, males have been seen to wave the females about to help disperse the larvae. Females are selective in their mate choice and may die in the process of resisting mating attempts from unsolicited males. Males compete heavily for females and often injure themselves or the females (losing appendages) while contesting over a female. Once terminally moulted, snow crab can live up to 6 more years, under optimal conditions. This means that females can reproduce two or more times, depending upon environmental conditions. The carapace condition rapidly deteriorates in the last year of its life, a stage that is generally associated with a mossy and decalcified carapace.

Between molts, the crab builds more organic tissues and prepares a new shell under the old one. When this process is completed and the conditions are suitable, the body shell splits at the back and the crab molts by backing slowly out of the old shell. Large crabs may take up to 10 hours to emerge from the old shell. Immediately after molting, the wrinkled, soft crab takes up water and swells to its new size in a few hours. The soft shell, covering all the body and the legs, gradually hardens and again, more muscles and other tissues grow inside, replacing the water that was absorbed at molting. It may take two months or more depending upon temperatures and food availability for a large mature crab to lose its soft-shell condition before it is at its best for harvesting.

Snow crab are sexually dimorphic with mature males having proportionally longer legs and larger claws than females. The abdomen, which is relatively small and folded under the body, is quadrilateral in males but circular in females. When sexually mature, the claws of males become proportionally larger than those of females or immature males. In mature females, the abdomen increases proportionally in size and the small appendages under the abdomen become large and branched with many fine hairs upon which the eggs are eventually deposited. Size at maturity for females is near 50 mm carapace width while males mature at a carapace width of 95 mm. At each molt, mature males grow about 20 percent in width and 60 percent in weight. Less is known of the growth rates of females.

The snow crab fishery in eastern Canada began in 1960 with incidental by-catches by groundfish draggers near Gaspé, Quebec. Its development was slow until the 1980s when it began expanding rapidly to become one of the largest fisheries in Canada, in terms of landings and landed value. On the Scotian Shelf, the fishery has been in existence since the early 1970s with landings at levels of 1,000 t. By 1979, this rose to 1,500 t subsequent to which the fishery declined substantially in the mid-1980s. A large pulse of recruitment to the fishery was observed in 1986. Total landings increased to record-levels of approximately 10,000 t each year in the early 2000s. The spatial distribution of total landings has shifted from being mostly derived from inshore areas in the past (2000-2002) to mostly from the offshore areas. Females have no commercial value due to their smaller size. This serves to protect their reproductive capacity from harm from human exploitation.

On the Scotian Shelf, the snow crab fishery is managed as three main areas: N-ENS, S-ENS and CFA 4X. There is no biological basis for these spatial divisions. They represent ad-hoc divisions based upon political, social, economic and historical convenience. In 2005, many areas and subareas were merged, except for Crab Fishing Areas (CFAs) 23A, 23 and 24. Similarly, fishing seasons have evolved for economic, safety and conservation considerations: severe weather conditions; catch of soft-shell and white crab; disruption of mating periods; and overlap with other fisheries, especially lobster. In particular, the CFA 4X season was set to run from the beginning of November to the end of May, completely disjoint from the ENS fishing period of June to September. The rationale for this choice was that better quality snow crab were caught during this period for the commercial market with the least amount of overlap with the lobster season.

From 1982 to 1993, the management of the N- and S-ENS fisheries was based on effort controls (size, sex, shell-hardness, season, license, trap limits). Additional management measures were introduced from 1994 to 1999: individual boat quotas (IBQs), total allowable catches (TACs), 100% dockside monitoring, mandatory logbooks and at-sea monitoring by certified observers (currently, 5%, 10%, and 10% in N-ENS, S-ENS, and CFA 4X, respectively). Vessel monitoring systems (VMS) have been gradually implemented in this fishery. Voluntary management measures requested by fishermen were also introduced in some areas, such as a shortened fishing season and reduced numbers of traps. The designation of a temporary licence holder was dropped in 2005.

In 2006, an updated soft shell protocol was adopted in S-ENS due to the expectation of an increased incidence of soft-shelled snow crab and the potential harm associated with handling mortality. The relative abundance of soft-shelled crab observed by at-sea-observers was relayed within 24 hours of landing to DFO, which was subsequently plotted on a 2-minute grid and broadcast to all members of industry. Fishers were requested to voluntarily avoid fishing within 1.5 nautical miles of the locations that had greater than 20% soft crab in the observed catch. This voluntary adaptive fishing protocol allowed fishers to rapidly move fishing gear away from or altogether avoid potentially problematic areas (helping also to save their time and fuel). This approach was not adopted in CFA 4X, where very low incidence of soft crab due to timing of season has traditionally been observed. In N-ENS, extremely high soft crab landings in 2007 required more substantial management measures: an experimental early fishing season which was largely successful, in addition to the standard summer season; and closure of sub-areas based on observer reports of high soft crab incidence. Finally, the voluntary return to the sea of immature, legal sized crab ("pencil-clawed" crab) was implemented in 2006 for all areas on the Scotian Shelf to allow these crab to moult to maturity and so maximise the total yield per crab captured and simultaneously the total lifetime reproductive success of these large-sized males.

A trawl survey of snow crab on the Scotian Shelf was developed by the Gulf Fisheries Centre, Moncton, New Brunswick (GFC) as a fisheries-independent assessment approach in 1996 and accepted in 1999. These surveys demonstrated the presence of previously unexploited crab in the southeastern shelf area, which subsequently led to large increases in TACs (Tables 2-4), catch rates and fishing effort (Figures 2, 4). Trawl surveys were formally extended to CFA 4X in 2004 and are now the basis for all assessments.

The research conducted on the Scotian Shelf focus upon the following major themes:

The research results are incorporated directly into our assessments of the snow crab and can be found in our research documents. The most recent can be obtained from:
http://www.dfo-mpo.gc.ca/csas-sccs/Publications/ResDocs-DocRech/2008/2008_003_e.htm (CSAS ResDocs - 2008/003)

Information on other research projects can be obtained from:
https://sites.google.com/site/autocatalysis/