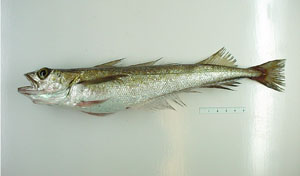 Silver hake are bottom dwellers found in the warmer waters of the Atlantic, with a range that extends from Newfoundland and Labrador to South Carolina's Cape Hatteras. They live at variable depths, about 50-400 metres, but occasionally as deep as 900 metres. Silver hake tend to migrate inshore during the warmer months and into deeper waters in winter. They are abundant on the Scotian Shelf and the Georges Bank.

Silver hakes resemble other fish in the cod family. A few features distinguish them, such as their lean, elongated body and two dorsal fins (instead of three). Silver hake also have a protruding lower jaw that lacks the chin barbell many of their relatives have. Covered with large scales, their body is silver-grey on its sides, becoming darker on their dorsal region and lighter on their underside. Their shiny colour fades quickly once they are removed from the water, however. Silver hake grow to about 75 cm, weighing on average about 750 grams. Males live to about 10 years and females live to about 12 years.