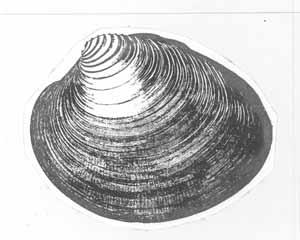 Quahaugs are a species of clam native to the Atlantic Ocean. In the western Atlantic they are distributed from the Arctic to the coast of North Carolina, while in the east, they occur from the Arctic to as far south as Spain. Quahaugs are also found around the British Isles and near Iceland. They live at depths from only a few metres to about 250 metres, occasionally deeper. They burrow just under the ocean bottom, preferring sandy or muddy beds.

Quahaugs are fairly oval and have a heavy shell. Their colour varies from yellowish-brown to black (it is thought that they become darker as they age). They can grow quite large, to a shell diameter of 13 centimetres. Quahaugs are also very long-lived, some specimens reaching ages of more than 200 years. They are among the slowest-growing clams that are harvested commercially.