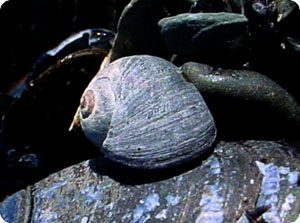 Periwinkles are marine snails found in the North Atlantic. They occur along the northeastern coast of North America, with a range that begins in Newfoundland and Labrador and ends in New Jersey. Periwinkles are abundant within their range, found at depths ranging from the intertidal zone to 40 metres below. They live near the shore on various ocean bed materials, usually rock, and less often, on sand or mud. Periwinkles tolerate low levels of salinity quite well and can be found living in the brackish waters of coastal estuaries.

Periwinkles grow to a maximum shell diameter of 4 centimetres. Their shells are rounded or globular with an opening relatively flat and a uniform edge. They are a mixture of brown, grey, black and olive shades, and have a dark operculum (shell hatch or "door"). Periwinkles may live from three years to five years.