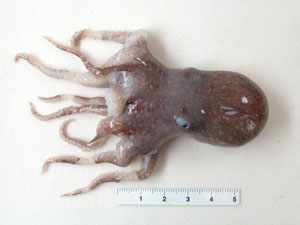 In Canada, octopuses are found in both the Atlantic and Pacific oceans. The giant Pacific octopus ranges from California through the Bering Sea to Japan and from the intertidal zone to at least 100 m depth. They can be found on most bottom types, particularly when foraging for food, and generally occupy rocky dens, which can be indicated by the presence of a midden of numerous shells from prey items. They are opportunistic predators with a wide range of reported prey; they feed primarily on crabs, bivalve and gastropod mollusks, shrimp and marine fish.

Octopuses are marine invertebrates with eight arms (sometimes mistakenly called tentacles). They are highly evolved and intelligent, if a bit reclusive, creatures that feed primarily on fish and shellfish. Octopuses seize their prey with their tentacles and can crush even the hardest of shells with their powerful beaks. In Canada, octopuses are found in both the Atlantic and Pacific oceans. Many of them do not live very long (the giant Pacific octopus lives for only three to five years). Their short life-cycles, coupled with their notorious shyness, make them difficult to study. Much remains to be learned about these fascinating creatures.