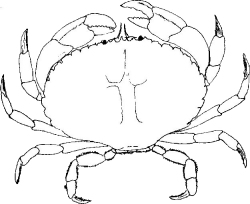 Jonah crabs are found along the Atlantic coast of North America. Their range begins near Nova Scotia and extends southward, at least as far as South Carolina and possibly Bermuda. Jonah crabs are found from the intertidal zone to about 640 metres, although they usually found in depths of 50-300 metres and at temperatures of 8-14° Celsius. They live in a variety of ocean beds, including rocks, clay, sand and mud.

Jonah crabs have an oval-shaped carapace with a rough texture. They have two large, powerful pincers and eight short, thick legs. Their colour is usually red on top and yellowish on their underside, sometimes with a mottling of yellow and red on their legs. Jonah crabs can grow to a maximum carapace width of about 180 mm, with males growing larger than females.

Jonah crab (Cancer borealis) are found from Newfoundland to Florida, and in the Bermudas, from the intertidal to depths of 800m (Haefner 1977, Stehlik et al. 1991; Wenner et al. 1992). Off Nova Scotia, they are found primarily at depths of 50-300m. Their preferred habitat varies from rocky substrates in coast areas, to silt and clay bottom on the continental slope. (Jeffries 1966; Krouse 1980; Musick and McEachran 1972; Wenner et al. 1992).

Little biological information exists for Jonah crab in waters off Nova Scotia with information on its life history drawn from studies off New England and Chesapeake Bay (Carpenter 1978; Wenner et al. 1992). On the Scotian Shelf the size at 50% maturity for males occurred at 128mm carapace width (CW). (Moriyasu et al. 2002). For females it is estimated to be at 92mm CW (Mikio Moriyasu, unpublished data).

Males can reach a maximum CW of 222mm (Robichaud et al. 2000) while females usually do not exceed 150mm CW. Egg bearing females as small as 65mm CW have been reported on the Scotian Shelf.

Jonah crabs have traditionally been fished as a by-catch to inshore and offshore lobster fisheries and since the 1960s, in intermittent directed fisheries. (Robichaud et al. 2000; Robichaud and Frail 2006). The fisheries are male only with a minimum legal size of 121mm CW (Lobster Fishing Areas (LFA) 36-38) and 130mm CW (LFA 33-35, 41).

Due to favourable market conditions during the late 1980s and early 1990s, several Jonah crab exploratory fisheries were started in southwest New Brunswick (LFA 36 and 38) in 1995 and in southwest Nova Scotia (LFAs 34 and 35) in 1996. The offshore Jonah crab fishery began in 1995 when a total allowable catch (TAC) of 720 metric tons was established for Jonah crab in the LFA 41 fishery (Pezzack et al 2009). In 2004, all of the exploratory crab permits became permanent commercial crab fishing licenses.

As of 2010, there was little commercial activity in most areas due to lower catch rates and low market demands. The exception is in LFA 38 (Grand Manan) with good catch rates and landing during 2008-2010 averaging 450mt. Jonah crabs continued to be caught as a bycatch in the inshore lobster fishery (LFA 34-38) and are either sold or used as bait.