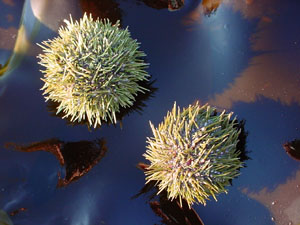 Green sea urchins have a circumpolar distribution, ranging into the Arctic regions of both the Atlantic and Pacific Oceans. It is found on the east coast of North America as far south as Cape Cod and in deeper waters to New Jersey, while its distribution ranges southwards to Puget Sound, Washington on the west coast. They live mostly in shallow waters, with a preference for rocky bottom in areas that are not subject to extreme wave action, but they have been found at depths of more than 1,000 metres. They tend to move around more frequently than their relative, the red sea urchin, and it is believed they may migrate on a seasonal basis. Green sea urchins are fished commercially for their roe, the majority of which is exported to Asia.

Green sea urchins are covered in short, sharp, movable spines that are shorter than the red urchin's and more delicate than the purple urchin's. This species can be pale green, or greenish tinged with purple or brown on their spines. They move using their spines and hundreds of miniature tube 'feet' located under their body, which have tiny suction cups to grip surfaces. Their circular mouth, also located on its underside, has five teeth. As they crawl along the ocean floor, they scrape fine algae off of hard substrate with their teeth, and also feed on kelp and other seaweeds. On the Pacific coast, green sea urchin shells (called tests) can grow to a diameter of about 100 millimetres, although the average size is 50 to 60 millimetres. Aging techniques for B.C. green urchins are currently being developed by the Pacific Biological Station, but green urchins on the Atlantic Coast have been known to live from 20 to 25 years of age.

Overview of the Fishery