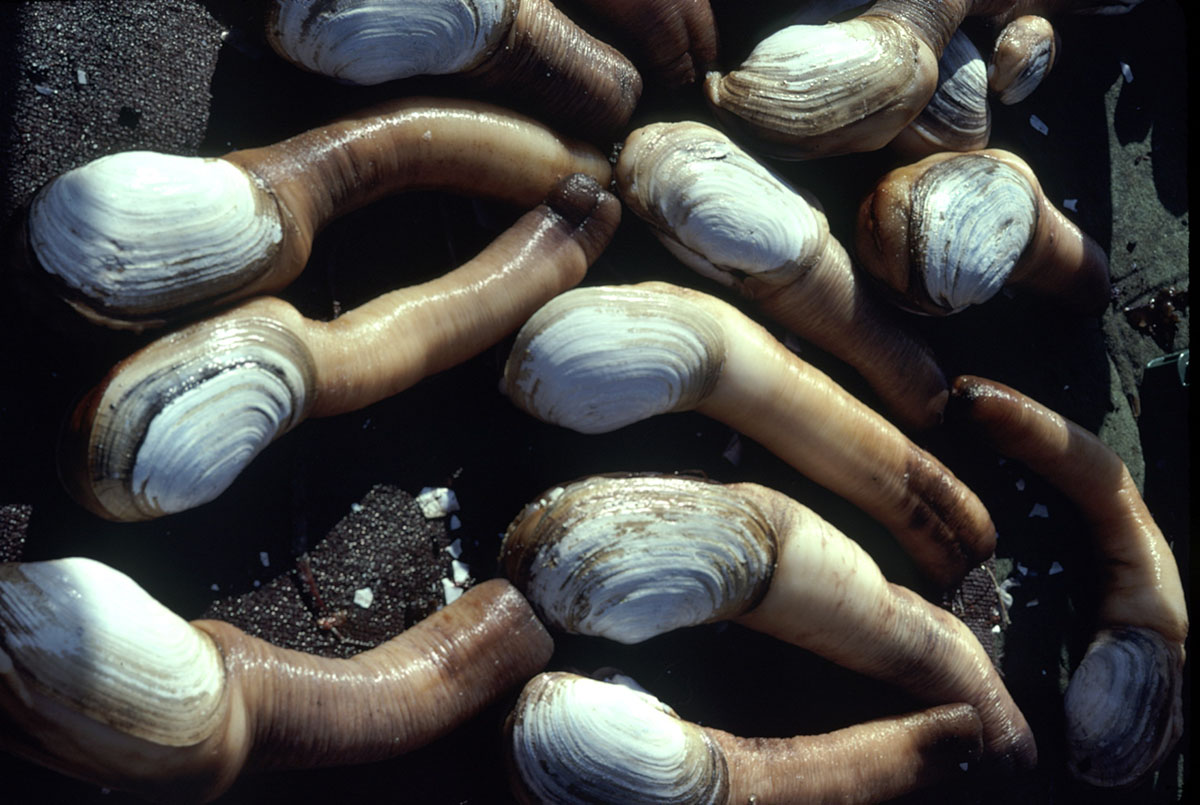 Pacific geoduck clams (Panopea generosa) are found in the waters of the northeast Pacific from Alaska to Baja California, Mexico (Quayle 1970). Fisheries for Pacific geoducks occur in Alaska, British Columbia, Washington state and Baja California, Mexico. Geoducks live at depths from the low intertidal zone to more than 100 metres (Jamison et al. 1984). They are found in beds of soft substrates (sand, mud, gravel and crushed shell) where they burrow into the ocean floor. A developing geoduck digs about a third of a metre per year. After reaching about a metre depth into the substrate, the adult geoduck settles in for a long uneventful life.

Geoduck clams are bivalves, and have two shells that are white and somewhat rectangular in shape. Their equal-sized valves do not conceal their enormous siphon (neck), which is white to reddish-brown in colour. Geoduck clams are the largest burrowing clams in the world, with a shell length that can exceed 20 centimetres. They generally weigh between 0.5 and 1.5 kilograms, but, occasionally, grow as large as 3 kilograms. Geoducks are long-lived, with maximum ages of at least 168 years (Bureau et al. 2002).

Geoducks are large burrowing clams found between the intertidal and approximately 110 m depth (Jamison et al. 1984), with an average landed weight of approximately one kilogram. Individuals can be aged from growth rings using a validated procedure (Shaul and Goodwin 1982). They are among the longest lived animals in the world, often reaching ages in excess of 100 years. Geoducks grow rapidly in the initial 10 to 15 years, after which time the growth in shell length ceases while total weight increases at a slow rate through a thickening of the shell and an increase in meat weight (Harbo et al. 1983, Goodwin and Shaul 1984, Sloan and Robinson 1984, Bureau et al. 2002, 2003). Estimates of natural mortality rate in British Columbia populations range from 0.01 to < 0.05 (Breen and Shields 1983, Harbo et al. 1983, Sloan and Robinson 1984, Noakes and Campbell 1992). Geoducks begin to recruit to the fishery at age 4 and are fully recruited at 12 years (Harbo et al. 1983).

Adult geoducks have separate sexes. Ripe gonads are found in clams ranging from 2 to 107 years old, suggesting that individuals may be capable of reproducing over a century. Spawning occurs annually, mostly from May to July in association with increases in seawater temperatures (Sloan and Robinson 1984). Geoducks are broadcast spawners, females release from 7 to 10 million eggs which are fertilized in the water column, followed by a 40 to 50 day pelagic larval period after which settlement on the bottom occurs (Goodwin et al. 1979, Goodwin and Shaul 1984). The settled post-larvae are active crawlers and can travel along the bottom aided by a byssal thread parachute. At a shell length of approximately 2 mm, they begin to burrow into the substrate; the depth occupied is related to the shell length and siphon length. At settlement and for the first two years, juvenile geoducks are vulnerable to a number of predators, including snails, sea stars, crabs (Cancer spp), shrimp and fishes (Goodwin and Pease 1989). Fast growing clams can bury to a refuge depth in the substrate of 60 cm or more in two years. Despite the large reproductive output of P. generosa over a long life, recruitment appears to be sporadic. Age-frequency distributions show peaks of juvenile abundance which suggests that populations may be supported by recruitment pulses. Laboratory experiments indicate that geoduck embryos have relatively narrow salinity and temperature tolerance limits (Goodwin 1973).

Much of the scientific research that is conducted on geoducks is aimed at estimating the biomass of populations in commercially-harvested areas. Geoduck density dive surveys provide the data to estimate the average density; mean individual geoduck weight is obtained from commercial harvest logbook data; and geoduck bed area is estimated from harvest locations and from dive and hydro-acoustic surveys. Biomass for each geoduck sub-bed is estimated as the product of the sub-bed area, geoduck density and mean geoduck weight on the bed. Regional annual harvest rates of 1.2 to 1.8% were determined through age-structured modelling (Zhang and Hand 2007). Harvest options are estimated for each sub-bed by applying the regional annual harvest rate to estimated sub-bed biomass.

Biomass and harvest options for each geoduck sub-bed are updated annually to include the latest density, mean weight and bed area data. The stock index, defined as the ratio of current biomass to unfished biomass for a sub-bed is also estimated yearly. Methods for estimating the stock index were updated in 2017 (Bureau 2017, DFO 2017). The Limit Reference Point (LRP) for the geoduck fishery has been set at 40% of unfished biomass and is applied on a by-sub-bed basis. Sub-beds where the stock index falls below 0.4 are closed to harvest.

As of 2018, over 74% of the geoduck bed area open to harvest has been surveyed by either SCUBA or remote-sensing acoustic surveys, or both. Thus, the recommended harvest options are increasingly based on information derived from data and less on conservative extrapolation. Geoduck population declines due to sea otter (Enhydra lutris) predation have been impacting geoduck quotas. Marine spatial planning initiatives may impact access to portions of the geoduck stocks in the future.

Current objectives in science are to characterize the geoduck beds to allow for spatial analysis and a better understanding of the metapopulation dynamics.

Geoduck research at the Pacific Biological Station is co-funded by the Underwater Harvesters Association (UHA).

Geoduck density dive surveys have been conducted in collaboration with the UHA and First Nations since 1992 in most areas of the BC coast. As of 2018, over 185 individual dive surveys (10 to 15 days each) have been conducted, covering over 62% of the beds and over 74% of the total bed area that is available for commercial harvest. Dive surveys provide the density data required to estimate biomass, from which harvest options are estimated.

The method used to survey involves laying lead-core transects, perpendicular to the shore, in random locations within known commercial geoduck beds. SCUBA divers swim on either side of the transect line with a 1-metre bar and count the number of geoducks and record associated habitat data between the transect line and the edge of the bar. The divers stop at the end of 5-metre marked sections to record their observations. For wide beds, every 2nd, 3rd or 4th quadrat is sampled, depending on the width. This allows more transects to be completed in a bed which reduces the variability in the data.

The geoducks are harvested with no bias for size, tagged with unique numbers and shipped to a licensed processing plant where they are measured, weighed and shucked. The shells are sent to the Pacific Biological Station where the shells are further processed to determine the animal ages. Geoduck ages are obtained by counting the rings on a cross section of the shell in the area of the hinge. The biological sample provides information of age and size distribution of populations, recruitment trends and growth rates.

Since the geoduck clam is harvested from subtidal fine-grain sediment, this makes them a perfect candidate for hydro-acoustic substrate classification. Hydro-acoustic surveys are used to determine the sediment composition of the top layer of the seabed in order to map the distribution of substrates suitable for harvestable geoduck populations. As of 2018, over 37% of geoduck beds, and over 52% of geoduck bed area open to commercial harvest, have been hydro-acoustically surveyed.

Remote hydro-acoustic sensing is also useful for the design of biological field surveys.

The commercial fishery for geoducks in British Columbia started in 1976. The geoduck fishery occurs throughout coastal British Columbia and is conducted by divers using HOOKA (surface-supply air) dive gear. In the commercial fishery, geoducks are harvested by hand, by divers who use a water jet (known as a "stinger") that loosens the substrate around the clam, allowing the diver to lift the clams out live. Geoducks are quickly shipped to processing plants where they are packed and usually delivered live to Asian markets.

The recreational fishery is limited to hand digging methods. Commercial gear ("stingers") and methods are not allowed when harvesting geoduck for sport.

The commercial fishery is managed by limiting harvest with a combination of a total allowable catch, sub-bed quotas, individual licence quotas, area openings and a catch verification program. Fishery managers set the total allowable catch (TAC) based on the science advice and discussions with the fishing industry. Deductions from the TAC are made for clams harvested in scientific surveys, for geoduck broodstock for aquaculture purposes and for biotoxin monitoring programs. The remaining TAC is divided into 550 equal quota blocks, and distributed among 55 licences. In-season, the fishery is managed on a fine spatial scale (at the by-sub-bed spatial scale), allowing qualitative information to be collected for most beds harvested, including density estimates and indicators of productivity.

A three-year area rotation is in effect in many areas of the coast. The north coast and inside waters regions are divided into three sub-units with roughly equal geoduck harvest areas. Some of these sub-units are fished at three times the annual exploitation rate (up to a maximum harvest rate of 5.4%) once every three years. The main exception to rotational fisheries is on the west coast of Vancouver Island which is fished annually to increase flexibility in harvest management due to the impacts of sea otter predation on geoducks. Rotational fisheries concentrate the fishing fleet to make it easier to monitor quotas and reduce the annual number of landing ports for validation of landings. This also allows for a more thorough examination of fishery areas, since data from only one third of the coast needs to be processed each year.

For more information about ongoing research on the geoduck at the Pacific Biological Station, please contact: