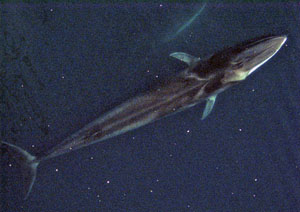 Fin whales are found in all oceans of the world, but are more abundant in temperate to polar latitudes. They generally make seasonal migrations from low-latitude wintering areas to high-latitude summer feeding grounds. In Canada, fin whale populations occur in both the North Atlantic and North Pacific. The fin whale was once quite common in Canadian Pacific waters, but commercial whaling activity has greatly reduced their numbers. Fin whales generally travel alone or in small groups far offshore.

The fin whale is the second largest whale in the world, after the blue whale. Fin whales are characterized by fast swimming speeds and streamlined bodies. Adult fin whales reach physical maturity at 25 years of age, and range in size from 20-27 metres, and 60-80 tonnes, with northern hemisphere populations tending to be slightly smaller than their southern counterparts. They can live for up to 100 years, and females reproduce at two to three year intervals. The species is often confused with blue, sei and Bryde's whales due to similar sizes and characteristics, though fin whales can be distinguished by the asymmetrical pigmentation on their lower jaws, which is dark on the left and light on the right.