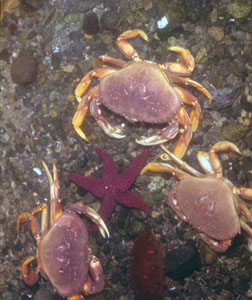 Dungeness crab are a west coast species ranging from the Aleutian Islands to southern California. They thrive in colder water, making the ocean off British Columbia a prime fishing area, where they live in bays, inlets and estuaries and on the open coast. Dungeness crab prefer sandy areas and live at variable depths from the intertidal zone to at least 250 metres; however, they are most abundant above 50-metre depths. They feed primarily on live prey including fish, crustaceans, clams and worms but will also scavenge.

Dungeness crab have an oval-shaped carapace that is yellow-brown to purplish. They have four pairs of walking legs and a pair of claws. The claws have light-coloured tips, sharp serated teeth and a pronounced hook at the tips, distinguishing it from similar species. Dungeness crab can weigh up to two kilograms and have a shell diameter exceeding 200 millimetres, but crabs of this size are uncommon because of the intensity with which they are fished.

Dungeness crabs are the most important crab species harvested in British Columbia and the second most valuable invertebrate fishery on the west coast of Canada, reported landings exceeded $21 million in 1998. These crabs are exploited by commercial, aboriginal, and recreational fishers coast-wide. Major crab fishing areas in British Columbia include the Fraser River delta, the Gulf Islands, inside waters of the Strait of Georgia and the west coast of Vancouver Island off Tofino.

Dungeness Crab stocks are managed by a minimum size limit and male only harvest which conserves the reproductive potential of crab stocks. As a result, population assessments are not required prior to fishing as with many other species and quotas are not set.

Dungeness Crab stock assessment focuses on the collection of biological data from crab stocks coastwide which are used to ensure that fishing practices do not inadvertently kill or injure female and undersize crabs that the minimum size of harvest is designed to protect. Activities include; determining when crabs moult in different areas in order to avoid fishing them when they are soft and easily damaged; determining injury rates and likelihood of injury with shell hardness; determining the effects soak time on the retention of undersize and female crabs in traps; determining the ratio of crabs caught to crabs discarded as a measure fishery productivity; determining movement patterns and likelihood of capture with size; advising on the use of various trap types, escape rings for undersize crabs and mechanisms to prevent traps from fishing if they are lost; and determining the availability of crabs for harvest by First Nations and recreational users.

Biological data is usually obtained from trap caught crabs collected aboard research and commercial vessels, however other methods such as trawling and direct observation via underwater cameras are also used.

The Dungeness crab, Cancer magister, is found from California to Alaska, generally on sandy bottoms less than 50 metres deep with moderate to strong current.

The maximum size in British Columbia is about 220 mm shell width, or approximately 2.0 kg weight, however, most crabs caught are less than 200 mm or 1.0 kg. Female crabs are generally smaller.

Crabs grow by producing a new shell underneath the old one, a process called moulting. Once the old shell is cast off, the new shell quickly swells with water to a size approximately 15-25% larger. For the first several weeks, the new shell is soft and easily damaged. In this soft-shell condition, the crab is highly vulnerable to natural predation and to injury or death as a result of trapping and handling. Hardening requires two months or more. Smaller crabs molt several times per year while larger crabs may molt annually or biannually after reaching sexual maturity. Moulting, generally takes place in late spring and is usually locally coordinated although timing is variable between years and over relatively short distances. A crab becomes sexually mature after the second year and usually enters the fishery at 3 years. Maximum age is estimated at 6-7 years.

Mating takes place in summer. The female crab can only be bred in the newly moulted (soft-shell) condition, but can produce two or more batch of eggs from a single mating using stored sperm. In the fall she extrudes a bright orange clutch of eggs which adheres to her abdomen. Throughout the winter she remains inactive, buried in the bottom sediments, protecting and aerating her eggs. The eggs are hatched in the spring and planktonic larvae are released into the water. The larvae develop for 3 to 4 months and become dispersed by ocean currents before eventually settling on suitable bottom. Recruitment of juveniles is probably from this general offshore larval population, at least regional, and appears to be independent of local adult stock abundance. Once these crabs have settled they are confined throughout their juvenile and adult lives by appropriate habitat.