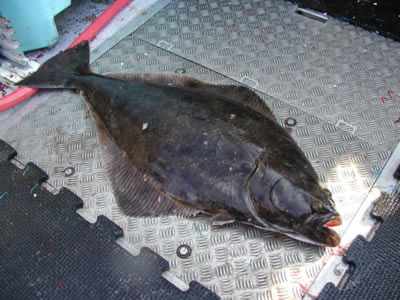 Atlantic halibut have a compressed, oval-shaped body and usually have both eyes on the right side of their bodies with the left side being totally blind. They are greenish-brown to almost black on their eyed side. Juveniles might be slightly spotted or flecked and have white undersides, which become mottled with grey or reddish spots as they mature. Their mouths are very large and have numerous sharp curved teeth. Atlantic halibut may grow to a length of more than two metres though they typically weigh less than 100 kg.

Growing to more than 2.5 m in length and exceeding 300 kg in weight, Atlantic halibut (Hippoglossus hippoglossus) is the largest, most widely-ranging and commercially-valuable groundfish in the Atlantic Ocean. Their geographic range in the Northwest Atlantic extends from the coast of Virginia in the south to the waters off Disko Bay, Greenland in the north, although they are now commercially extinct in US waters and are rare south of the Grand Banks. Halibut are demersal, living on or near the bottom, with a temperature preference of between 3 and 5°C. On the Scotian Shelf and southern Grand Banks, halibut are most abundant at depths of 200–500 m in the deepwater channels running between the banks and along the edge of the continental shelf. Larger halibut are found in a larger depth range, and are also found in deeper water in winter.

Halibut belong to the family Pleuronectidae whose members usually have both eyes on the right side of their bodies with the left side being totally blind. They are flattened from side to side and swim with the left side facing the bottom and the right or eyed side facing the surface. The halibut's coloration, which occurs only on the eyed side of the body, varies from greenish brown to very dark chestnut brown. The blind side is usually white in young fish but becomes mottled with grey or even cherry red in older, larger fish. The mouth has a very large gape extending to the midline of the eyes and is armed with numerous sharp curved teeth. Apart from its size, the Atlantic halibut can be distinguished from most other species of flatfish by its concave tail.

Growth of males and and females from the Scotian Shelf and southern Grand Banks is similar up to about 7 or 8 years (~100 cm), after which point male growth slows, while female growth continues at the same rate up to 20 years. The maximum size for females (200 cm) is much greater than males (140 cm). Age at maturity is uncertain, but length at maturity has been estimated to be about 115 cm for females and about 75 cm for males. Spawning location and times are not known, but anecdotal accounts by halibut fishermen indicate that spawning by Atlantic halibut likely occurs in deep water (300–700 m) during winter months between December and March.

Within the management unit 3NOPs4VWX5Zc, which encompasses the Scotian Shelf and southern Grand Banks, halibut is fished mostly along the edges of the continental shelf mainly by longliners using bottom hook-and-line gear.

The annual DFO Scotian Shelf groundfish research vessel (RV) trawl survey has been conducted every year since 1970. The catchability of the RV trawl for halibut larger than 81 cm is low, and the catch rate is highly variable from year to year (40 to 70 individuals), so is considered to be an unreliable index of adult abundance. However, recruitment to the fishery can be estimated since the mean size of halibut caught in the trawl survey is 58 ± 7 cm.

The Halibut Long Line Survey was developed collaboratively with industry and DFO Science in 1998 to monitor a broad size range (50–230 cm) of Atlantic halibut throughout the Scotian Shelf and southern Grand Banks (3NOPs4VWX5Zc). The survey was designed to generate an index of abundance for the exploitable population (≥ 81 cm), monitor changes in population trends and distribution, and provide an indication of incoming recruits.

Consisting of approximately 300 fixed stations with a stratification scheme based on landings information, the survey runs annually from May to July. On average, 200 are completed each year. Fishermen follow fishing protocols, including rules on minimum distance from a station (3 nautical miles), hook-size (14 circle hook), number of hooks (1000), and preferred soak time (10 hours). During the same time as the survey, a commercial index survey, which serves as a proxy for commercial fishing, is conducted. For the commercial index, fishermen fish with similar protocols as fixed stations but at locations of their choice.

Both the halibut survey and the commercial index show a similar distribution for halibut catches over a decade of sampling. The halibut survey abundance index suggests a possible increase in catch rates in 4VWX in recent years and a relatively stable catch prior to 2003. The commercial index catch rates, however, are more variable and there is no indication of increasing catch rates in recent years. The most recent stock assessment for 3NOPs4VWX5Zc Atlantic halibut is available at Assessment of Atlantic Halibut on the Scotian Shelf and Southern Grand Banks (NAFO divisions 3NOPs4VWX5Zc) (CSAS SAR - 2009/036).

An ageing study on Atlantic halibut from the Scotian Shelf and southern Grand Banks was conducted from 2005 to to 2008. Ages were estimated by counting growth increments from approximately 2,500 thin-sectioned Atlantic halibut sagittal otoliths. Age estimates were validated using bomb radiocarbon techniques which indicate that growth increments are laid down annually. After 8 years of growth, annulus width narrowed considerably, possibly in concert with sexual maturation. Growth rate for males and females was similar up to about 7 or 8 years (~100 cm), after which point male growth slowed, while female growth continued to up to 20 years reaching a larger maximum size (200 cm) than males (140 cm). Atlantic halibut is a long-lived fish, living up to at least 50 years, an important consideration for the management of the fishery. More information on this study can be found on the Otolith Research Laboratory sub-site of the BIO website.

A tagging program using t-bar anchor tags (also called spaghetti tags) was run on the Scotian Shelf and southern Grand Banks from 2006 to 2008, and will continue in alternate years beginning in 2010. Recapture results indicate Atlantic halibut move extensively throughout the Canadian North Atlantic, including well outside of Canada's Economic Exclusion Zone. It is possible that halibut located outside Canadian management areas, including United States waters, the Flemish Cap and waters north of Newfoundland (NAFO 3KLM), might be part of the same stock. Maine's Department of Marine Resources recently reported similar large movements, and in particular, found 28% of tags applied in nearshore Maine waters were recaptured in Canadian waters. However, no halibut tagged in Canadian waters have been caught in US waters.

By February 2009, 224 of 2,076 tagged halibut had been recaptured. The greatest numbers of tagged halibut were caught during times of intensive halibut fishing, such as during surveys and the during the spring fishery. The tagged fish moved anywhere between 1 and 2,698 km from their release sites. Notably, two halibut traveled approximately 2,600 km from the Grand Banks to Icelandic waters in about 2 years.

There was no relationship between days at large and distance traveled, however, the dominant movement was to the east and west, with the easterly movements being over greater distances than the westerly movements.

In addition to movement patterns, this tagging project provides exploitation rate estimates which are used to gauge if the stock is being harvested at an appropriate level. Exploitation rate was determined to be 17.7% in 2006, and 20.1% in 2007.

Pop-up satellite archival tags have been attached to halibut and released at various locations on the Scotian Shelf and southern Grand Banks. These electronic devices record depth, temperature and approximate location for up to 12 months. After release from the host organism, the tag rises to the sea surface and transmits the data to Argos satellites. We are anticipating exciting information from these high-tech devices.