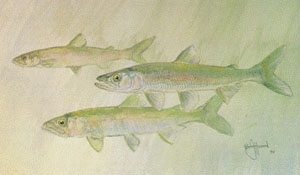 American smelt is widely distributed on both sides of the North Atlantic, as well as in the Northwest Pacific and Arctic oceans and in many inland bodies of water. It is an anadromous species, like salmon, which means they can travel between freshwater and the marine environment, but spawn in freshwater. Commercial fisheries for American smelt exist in the Atlantic Ocean and in the Great Lakes.

Smelt are fairly small, usually less than 20 centimetres long, but can grow to 25 centimetres in length. An elongated fish with a silvery colour, smelt have light or olive-green backs and large scales. When removed from the water, smelt reflect with a pink, purple or blue iridescence, hence the common name rainbow smelt. A dorsal fin is located about midway along their length. Their mouths are relatively large with fang-like teeth and a protruding lower jaw. Males are distinguished during spawning periods by tubercles (small bumps) covering their bodies. They live about five years, with females living longer and growing bigger than males in most cases.