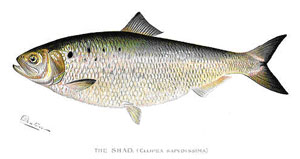 American shad are native to the western Atlantic, ranging from Newfoundland and Labrador to Florida. Shad were introduced to the Pacific coast in 1871 in the Sacramento River in California and have become established from Baja, Mexico to Cook Inlet in western Alaska and the Kamchatka Peninsula in Russia. They were first seen off the British Columbia coast in the 1800s but are rarely caught in the Fraser River or any other river on the Canadian west coast. Migrants from American. Rivers to the south are caught occasionally in the sea along the British Columbia coast. American shad are anadromous, which means they spawn in freshwater, move in their first year to the ocean where they grow and mature. After four or more years in the ocean, maturing shad return to spawn. Like the Pacific salmon, shad are known to have homing abilities and may return faithfully to the river where they were born.

American shad are the largest of the herrings and like all herring are streamlined, silvery fish with deeply forked tails. They have a brown-black through blue-green iridescent back, and one to three rows of dark spots behind the gill cover. They are covered in large scales, with sharp, saw-toothed scutes on the lower margins of their bellies. In freshwater, adults take on a coppery sheen, with males likely to also have a red head and belly. American shad are 40 to 60 centimetres long and weigh one to three kilograms. Females are usually larger than males. Among Canadian populations, adults may spawn up to seven times and live to be 13 years old.