The American lobster is distributed throughout the northwest Atlantic, from the coast of North Carolina to the waters of Newfoundland and Labrador. A nocturnal creature that hides under rocks or in crevices most of the day, the American lobster is generally found in waters less than 50 metres in depth, but have been observed at depths greater than 500 metres. The largest populations are found in the Gulf of Maine and, in Canada, around Nova Scotia and the southern Gulf of St. Lawrence.

Like other crustaceans, the American lobster has a hard exoskeleton, or shell. It is brown to olive green and may be flecked with red, orange or black. It is long-lived and can grow to lengths of 60 centimetres and weigh over 18 kilograms. It has a total of five pairs of walking legs, including the great claws, or chelipeds, as well as two pairs of antennae, an abdomen bearing feathery appendages known as pleopods, and a tail with a central telson and four fins called uropods. The American lobster molts many times during its lifetime, usually in warmer waters. 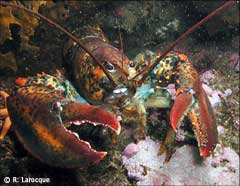