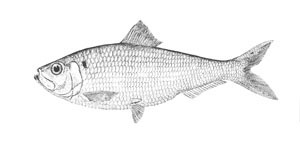 An alewife is a herring-like fish found in the northwest Atlantic, from the Gulf of St. Lawrence to North Carolina. An anadromous fish - it travels between freshwater and marine environments, but spawns in freshwater - Alewives are also found in rivers and streams throughout eastern North America. Landlocked populations also exist in the Great Lakes. In Canada's Atlantic provinces, they are more commonly found in larger rivers. Spawning typically occurs in lakes or slow moving portions of rivers in the late spring.

Alewives are slender, with a silvery body, a greyish-green back and a forked tail. They have a black spot on their shoulder behind their eye and scutes (thorny scales) on their belly that form a keel. Saltwater populations sometimes have a brassy hue and are usually less than 30 centimetres long and weigh around 400 grams. Landlocked populations are typically much smaller than their sea-run relatives.