Population dynamics is the study of population size and factors that affect animal abundance. These factors include age at maturity, age-specific reproductive rates, age specific mortality rates, and levels of immigration or emigration. Research also examines factors that may affect population parameters such as energy intake or disease. 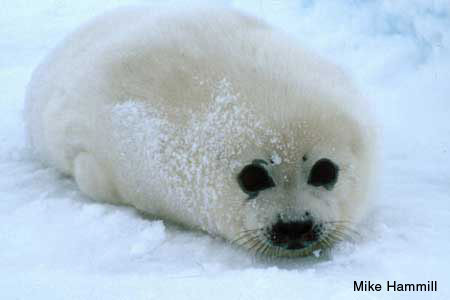 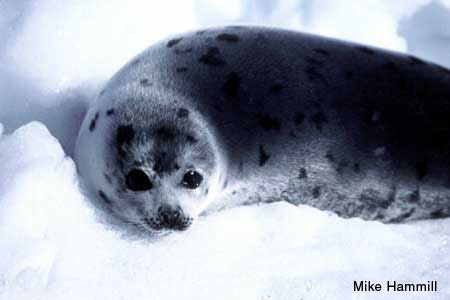 The harp seal is the most abundant seal in the Northwest Atlantic Ocean, with an estimated population of 7.4 million animals in 2013.

The harp seal population is monitored through a combination of aerial surveys that determine how many pups are born in a year, and the collection of seals by hunters to obtain information on age at maturity and age specific reproductive rates. A population model is then used to determine total population size. This is done by calculating how many adults in a population would be required to produce the number of pups that are counted during the surveys, given the reproductive rates that are obtained from the sampling program. The model achieves this by adjusting the mortality rate of the adults so that the modeled population produces the observed number of pups.

In addition to information on the number of pups born, and reproductive parameters, model inputs include removals from the population due to incidental catches by the fishing industry, the number of animals that are removed from the population by subsistence, and commercial harvesting, and also a factor that corrects removals by hunters for animals that may have been struck or killed but not recovered or reported. 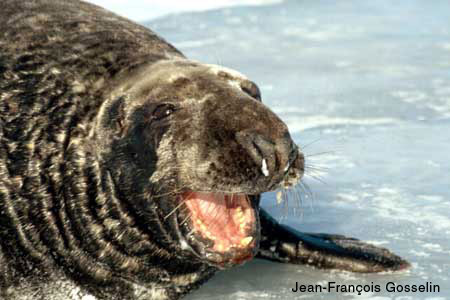 The grey seal is a large seal that may weigh up to 230kg (females) to 350kg (males). In the Northwest Atlantic they occur in the Gulf of St. Lawrence, and along the North American coast from the northern tip of Labrador to the New England states. The grey seal population has increased from approximately 20 000 animals during the 1970s to 505 000 in 2014.

Changes in the grey seal population have been modeled using methods similar to those used to monitor the harp seal population. Information on population size has been obtained from aerial surveys to count the number of pups, total counts of pups born in a colony, or through mark-recapture experiments. Information on reproductive rates and mortality rates have also been obtained via multiple resightings of uniquely marked animals. 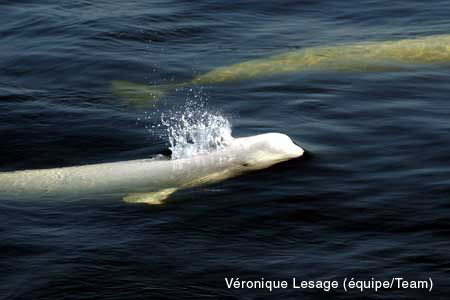 Beluga whales have a circumpolar Arctic distribution. They are medium-sized toothed whales (Odontocete) with an adult length of 350 cm and weigh up to 500–600 kg. Mating is thought to occur during winter or early spring. Calves are born after a 14 month gestation and lactation lasts roughly 18 months. Beluga calves spend 2-3 years with their mother. The St. Lawrence Estuary population is at the southernmost limit of the species distribution. The population is listed as threatened under the Species at Risk Act (SARA). Beluga abundance in the St Lawrence Estuary has been modeled using aerial surveys, which also provide information on the proportion of young animals in the population. A carcass monitoring program provides information on the sex and age-structure of animals that are recovered.

Although drastically reduced in numbers from hunting, the St Lawrence Estuary beluga population was stable or increasing at a very slow rate since the end of the hunt in the 1960s and numbered around 1000 individuals in the early 2000s. However, since then the population has declined, possibly to as low as 889 individuals in 2012. The decline is largely thought to be due to reduced recruitment, which means that there has been a decline in number of calves born and/or an increase in calf mortality before they reach maturity. There are several factors that are thought to have contributed to this decline including disturbance, changes in ecosystem conditions and contaminants. See the Science Advisory Report 2013/076 for more information. 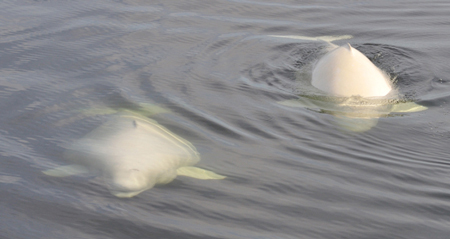 Belugas perform seasonal migrations: in Nunavik, they summer in three areas: western Hudson Bay, eastern Hudson Bay and Ungava Bay. In winter, these stocks are found in Hudson Strait, Ungava Bay and Labrador Sea. During the 2-3 year parent-offspring association, young belugas learn migration routes while following their mother. Once this seasonal migration pattern is learned, it appears that beluga rarely deviate from it. Therefore, although genetic analyses indicate that most beluga in Hudson Bay belong to the same breeding population, they exhibit fidelity to specific aggregation areas in summer. This has important management and conservation considerations since loss of animals from a summering area, or migration path means that it is unlikely that other animals will replace them.

Information on population size has been obtained from aerial line-transect surveys to count the number of beluga whales at the surface. These numbers were then corrected for the proportion of submerged animals. Hunters provide skin samples from the animals they have harvested as part of their subsistence hunt. DNA is extracted from this skin sample and it is possible then, to determine if the animal belongs to the western Hudson Bay or the eastern Hudson Bay group. 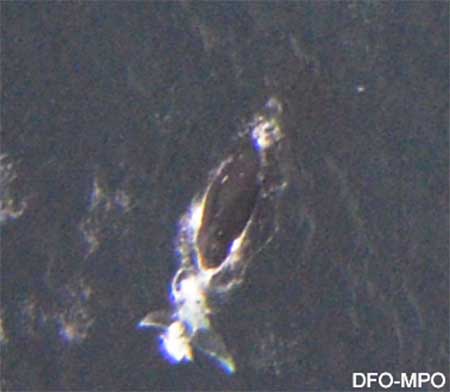 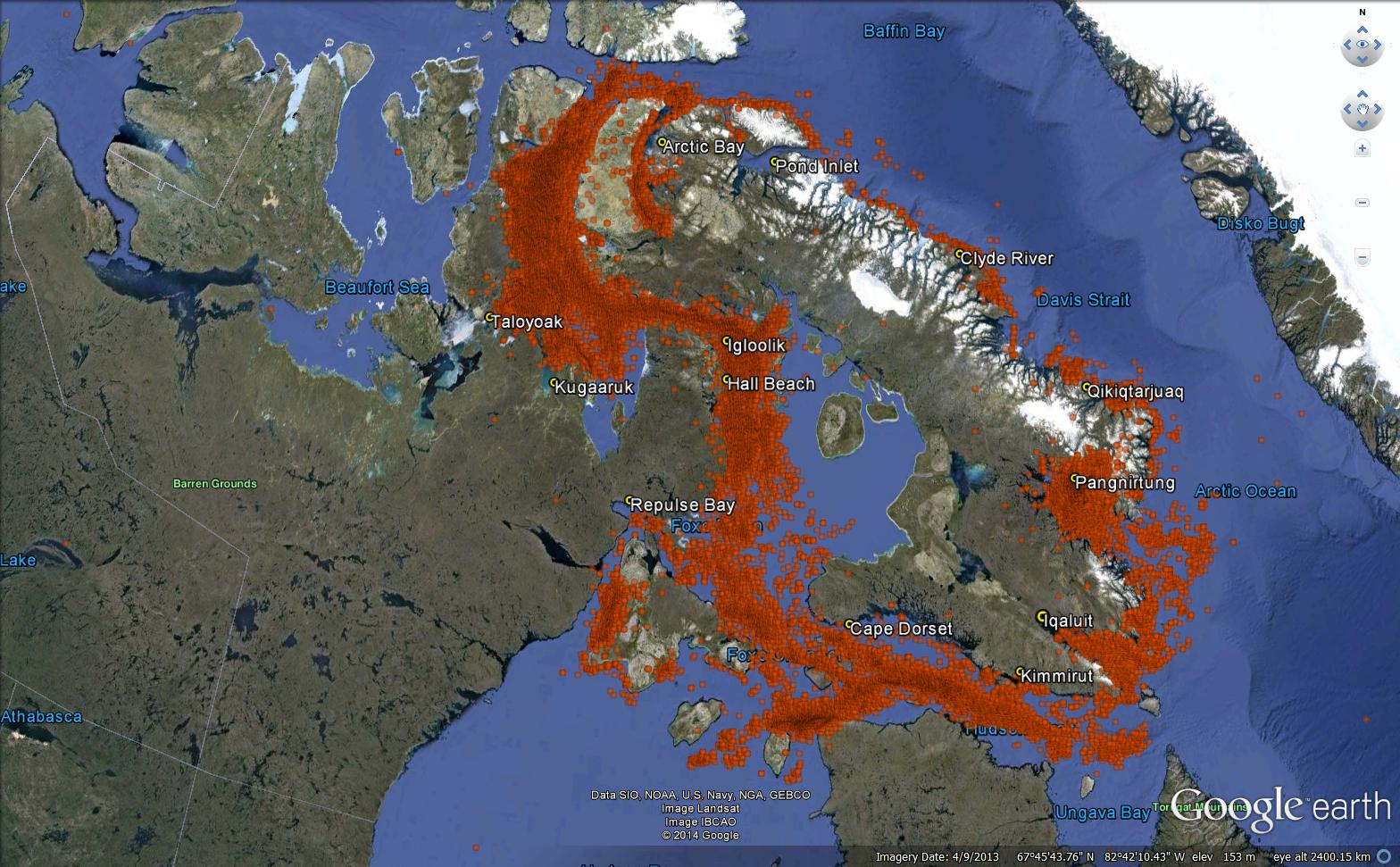 The bowhead whale also has a circumpolar Arctic distribution. It is a large, baleen whale (Mysticete) that can reach a length of 20 m and a weight of 75 tonnes. Two populations are recognized in the Canadian Arctic, which are separated by physical barriers (land and impassable ice). The Bering-Chukchi-Beaufort population summers in the Canadian Beaufort Sea, along the south and west coasts of Banks Island and west of Tuktoyaktuk Peninsula, as well as in Amundsen Gulf. In winter, the population is distributed in the western and central Bering Sea (additional information available here). The Eastern Canada-Western Greenland population summer in western Baffin Bay, the Canadian High Arctic, northern Foxe Basin, and northwestern Hudson Bay. Wintering occurs in areas with unconsolidated pack ice such as northern Hudson Bay, Hudson Strait, central Davis Strait, southern Baffin Bay, and off West Greenland (see the Species at Risk page for details). In recent years, the reduction of the summer ice has removed a barrier, and some animals from the eastern group of bowhead whales have migrated further west than previously observed, into waters normally considered to be occupied by the western stock of bowhead whales.

The bowhead in North America represents a conservation success story. Both populations were heavily harvested during commercial whaling (started in 1530, but mostly 1719-1915) and declined markedly. Across the range of the species, the total population in 1991 was about 15% of the pre-whaling abundance. Most commercial harvest ended by 1915, although some activity continued until 1951. In 1979, a moratorium was imposed on subsistence hunting by Inuit. The Bering-Chukchi-Beaufort population was estimated to 10 400 individuals in 2001. This represents an important recovery, since the stock was estimated to 7500 animals in 1991, compared to 14 000-20 000 prior to commercial whaling. The pre-whaling abundance of the Eastern Arctic population is estimated to a minimum of 12 300 animals, which was thought to have fallen to very low numbers, possibly to only a few hundred by 1915. Observations by the Inuit indicated that numbers of bowhead had increased over the last five decades. Aerial surveys performed in 2013 indicated that the eastern population numbers around 6700 animals. Subsistence harvests resumed in 1996. 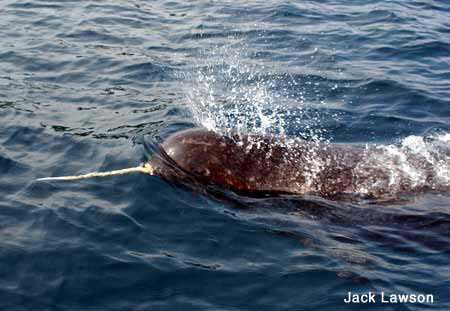 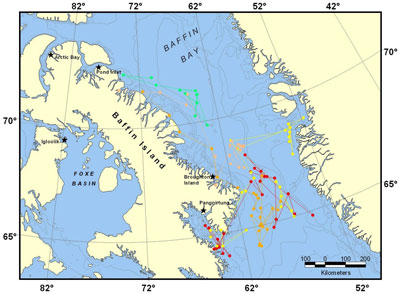 Narwhals are medium-sized whales that may weigh up to 1600 kg and measure up to 5.5 m. Males (and a small proportion of females) possess a tusk, a canine tooth protruding from the upper jaw which grows in spiral throughout the animals' lifespan. Its distribution is spread throughout Canadian Arctic, Russian and Greenland waters.

Narwhals undertake seasonal migrations. They show high site fidelity to their summering grounds, which they leave when the sea ice freezes. Their migration follows the progression of sea ice formation. They arrive in their wintering grounds in early November, and quit for higher latitudes by early April following the receding sea ice. Since winter areas are covered by pack-ice and narwhals are not capable of breaking thick ice to make breathing holes, they aggregate around leads and cracks in the pack-ice.

Three populations of narwhals are identified in the Arctic. The Baffin Bay population was estimated to be ≈ 170 000 animals in 2013. This population summers in bays and fjords of the High Canadian Arctic and western Greenland, and overwinters in southern Baffin Bay and northern Davis Strait. Narwhals forage in their wintering areas, and stomach contents and dive profiles suggest that Greenland halibut represent an important component of the winter diet of Baffin Bay Narwhals. Faced with an increasing interest in the southern Greenland halibut stock, Fisheries and Oceans Canada developed a policy in 1998 to limit fishing effort in a significant portion of the southern narwhal wintering area to protect their food resource (complete report available here).

The Northern Hudson Bay population is estimated to be ≈ 12 500 animals in 2011. Its summer distribution is concentrated in Repulse Bay, Lyon Inlet, Western Foxe Channel and waters surrounding Southampton Island. Most of these narwhals overwinter in eastern Hudson Strait, while some animals migrate southward to open leads or polynyas in Hudson Bay.

The East Greenland population is the third population and was estimated to number ≈6400 whales in 2008. Its summer range extends across the Arctic Ocean from the northern Greenland Sea to the East Siberian Sea. This population spends the winter eastern Greenland and western Iceland.