The Ocean Decade Community of Champions was created with 1 champion for each of the 7 Decade Outcomes. The Champions aim to mobilize the Canadian ocean community and foster the creation of innovative and transformative science‑based actions. Lisa (Diz) Glithero, Champion for An Inspiring and Engaging Ocean, and Kent Smedbol, Champion for A Productive Ocean, explain their role and vision for their respective thematic networks:

Lisa (Diz) Glithero, Champion for An Inspiring and Engaging Ocean

"Through the Canadian Ocean Literacy Coalition - an alliance of organizations, institutions, networks and communities across regions, sectors and scale - we will advance ocean literacy in the Ocean Decade by leveraging the implementation of the co-developed national ocean literacy strategy. This includes, for example:

It is going to take all these things and more to really transform society’s relationship with the ocean.”

“Canadian coastal and Indigenous communities from coast to coast to coast benefit from sustainable harvest and sustainable use of ocean spaces. In the face of a changing ocean climate, ensuring sustainability of our activities is a shared responsibility of all those who collect food or make their living from the ocean. Our group will focus on promoting development of:

to help promote and advance sustainable ocean use for a more productive ocean under the umbrella of the Ocean Decade initiative.”

Recently, a new series of Decade Actions received endorsement. These include 15 Canadian-led projects focusing on a variety of themes, including:

The IOC’s fourth call for Decade Actions is now open

The IOC’s fourth call for Decade Actions (No. 04/2022) is now open for submissions until January 31, 2023. The IOC launches calls for Decade Actions every 6 months. These calls are an open invitation for project leads worldwide to collaborate on transformative and innovative initiatives that contribute to achieving the Ocean Decade vision. The current Call is seeking new programs on Ocean Decade Challenge 6 – Increase Community Resilience to Ocean Hazards and Ocean Decade Challenge 8 – Create a Digital Representation of the Ocean. It also seeks to identify new projects on a variety of thematics.

Submit your initiatives to be considered for Ocean Decade endorsement and to gain access to a global community that is contributing to enhancing ocean sustainability.

For more details on the Call, see the news release or visit the Ocean Decade’s Global Stakeholder Forum. 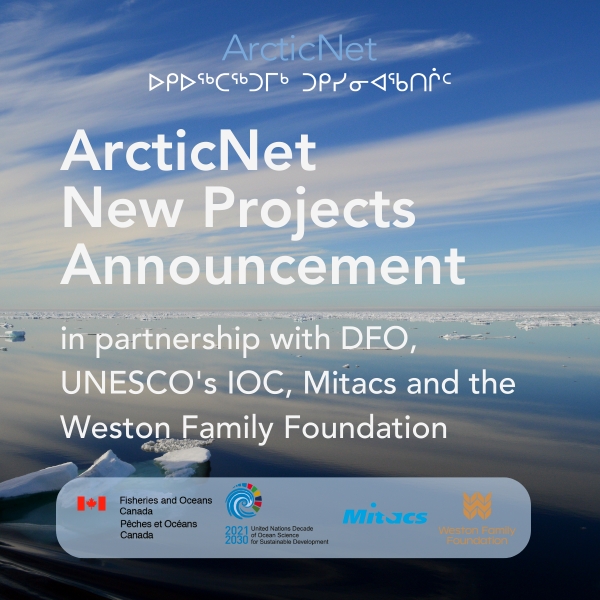 ArcticNet, Canada’s national hub for Arctic and northern research, partnered with DFO, UNESCO’s IOC, Mitacs and the Weston Family Foundation to fund 21 projects supporting a self-determined and sustainable Canadian North. With more than $4 million over 2 years, the new projects will improve understanding in key priorities for the North, including:

Four of the new projects identified through this call for proposals align with the Marine Systems priority and received official endorsement as Ocean Decade Actions from the IOC. These projects address key priorities in ocean and Arctic marine science, including:

all of which are very important given the impact of climate change.

ArcticNet will hold its Annual Scientific Meeting on December 4-8, 2022 in Toronto, ON

The ArcticNet Annual Scientific Meeting (ASM) is a meeting ground for world-class Arctic research. Every year, Arctic research leaders from across Canada and worldwide, along with their partners from Inuit organizations, northern communities, federal and provincial agencies and the private sector, convene to share knowledge, build relationships and foster a strong Arctic research network.

Learn more on the conference webpage.

The Ocean Tracking Network receives $38.5M from the Canada Foundation for Innovation

Ocean Tracking Network (OTN) has been awarded a grant of $38.5 million from the Canada Foundation for Innovation’s (CFI) Major Science Initiatives (MSI) Fund, the only 1 in Atlantic Canada, bringing the total amount awarded to OTN from the Government of Canada to $65.6 million. The MSI Fund supports unique operating and maintenance needs of some of Canada’s leading research facilities — both physical spaces and virtual networks — to serve researchers as they continue driving science and innovation.

Since 2008, OTN has been deploying innovative ocean monitoring equipment and marine autonomous vehicles (gliders) in key aquatic locations around the globe and has since expanded to include remotely operated vehicles and side scan sonar technology while fostering international collaboration. Read the full media release.

Ocean Networks Canada (ONC) has recently released its new website and the Oceans 3.0 Data Portal, which has attracted more than 32,000 global users who can search, download and visualize data received from over 12,000 sensors on ONC’s cabled observatories, mobile platforms and autonomous instruments on all 3 coasts of Canada. The website offers new tools and features including:

Join the ORCA Pod! Membership is free and provides you access to the ORCA Community Platform which facilitates coordination and collaboration between ORCA members. Send an email to the ORCA Secretariat ORCA.AROC@dfo-mpo.gc.ca to join the more than 500 members from over 155 organizations that are already part of ORCA. Together we can advance our collective understanding of the ocean!