Special Projects - Structure of Populations Levels of Abundance, and Status of Humpbacks 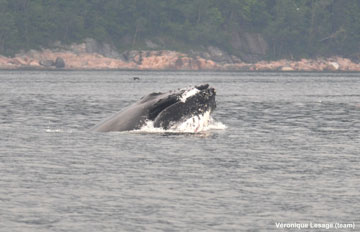 Humpbacks (Magaptera novaeangliae) are baleen whales which can reach 16 m in length and 36 tonnes in weight. They have a worldwide distribution, migrating annually from their polar summer habitat to tropical or subtropical waters in the winter where they give birth.

Humpbacks were a target of the whaling industry in the 1800 and 1900s, which resulted in a severe population reduction (approximated to 90% of the world population). In the North Pacific, pre-whaling abundance was estimated to > 15 000 animals. When the International Whaling Commission ended humpback whaling in 1966, 1200 to 1400 humpback whales remained in the North Pacific. The species was listed as threatened by the Committee on the Status of Endangered Species in Canada. Although the population is thought to be increasing, collisions with ships, entanglement in fishing gear and modification of prey availability still represent threats. The abundance of humpback whales in the North Pacific is challenging to assess given the broad spatial range and complex migratory patterns of the species.

How to achieve this goal

One of the largest international collaborative study of whale populations ever conducted was organized among the North Pacific scientific community. Over 50 research groups and 400 researchers from 10 countries including Canada, Russia, Japan, Mexico and the United States were involved. Efforts where conducted on all known humpback whale winter (breeding) and summer (feeding) areas from 2004 to 2006, and 2004 to 2005, respectively. The project counted two components:

The consistency of protocols among research groups allows for valid comparisons of the results from the different studied areas. The results from this study indicated that the North Pacific humpback population has increased substantially since the 1960s, and this finding lead to a change in its COSEWIC (Committee on the Status of Endangered Wildlife in Canada) status from «threatened» to «special concern» (lower risk category) in 2011.